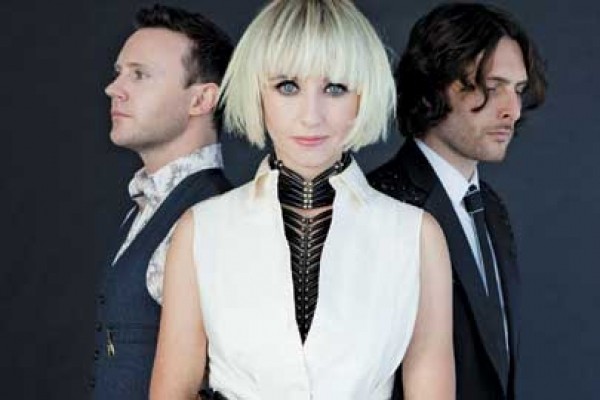 Logistical accidents are the best kind, as The Joy Formidable singer and guitarist Ritzy Bryan can attest. While touring in 2011 behind their raucous, critically acclaimed debut, The Big Roar, the U.K.-based modern-rock trio was scheduled to play a show in Maine right before a weeklong break, but the show was canceled. Needing to get away, they found a cabin just outside of Portland, Maine, and unplugged from the world.

“We wanted to go somewhere that was a complete contrast from being out on the road,” Bryan says. “That’s what we looked for. It definitely brings a different energy to the creative process—being so isolated and getting away from everybody.” With no phone signal and no Wi-Fi, the group cut loose and hid for a week. “It all started off as a logistical accident, being there in the first place, but it worked out well.”

They were so enamored with the location that they returned there in January 2012 to record the follow-up to The Big Roar, the recently released Wolf’s Law. Being so secluded encouraged them to make the record as raw as possible. Despite the presence of uplifting tracks like the album’s first single, “The Ladder is Ours,” or the upbeat, propulsive rock sounds of “Little Blimp,” Wolf’s Law has a decidedly gritty edge to it. “Bats” conjures up images of winged demons ripping through caves and flooding night skies, Bryan’s guitars on “Cholla” are fuzzy and abrasive, and “Tendons” is a rocking, metaphoric tale that examines how people—like tendons—deal with stressful situations.

So, when the simple acoustic track “Silent Treatment” shows up in the middle of the album, it’s surprising until you hear why. “After hearing it stripped down like that, we didn’t want to add anything to it,” Bryan says. “It felt so pure, like we had captured a moment, and that’s the approach we take with this band. We’re not big fans of doing second takes or going into the studio to supposedly try and perfect things. That first take sometimes—even if it’s got its faults—seems much more important because of its heart when you capture it in its first moments of existence.”

It is a testament to The Joy Formidable’s willingness to let the music do what it wants and not confine themselves to genre labels that Wolf’s Law has as much variety as it does. “Forest Serenade” is an almost operatic piece of stadium rock in the vein of Muse, “The Hurdle” dips its toes into the pop/rock arena, and “The Turnaround” is one of many songs on Wolf’s Law that uses heavy orchestration. “Maw Maw Song” includes time changes. There’s something for everyone, which is how the band likes it.

“We’ve always felt very clear about our identity, the spirit of the band,” Bryan says. “We’re very lyrically driven, and we’re all very clear about who we want to be as a band. I’ve always admired bands that were able to go beyond genres within an album, or even from album to album.

“Ultimately, at the root of it is always the art, and we like to let the songs breathe and take us where they want to take us,” Bryan continues. “We’ve never felt we should be limited by instrumentation. We’re a guitar band, but we’re also a whole lot more than that. That’s the creative element we enjoy about music is that there is no formula. You let the songs speak and the cohesion comes from having confidence, identity and a voice for the band.”

Wolf’s Law is one of 2013’s most diverse releases. Imagine what might have been—or might not have been—had that one little show gone on as planned instead of being canceled.Â