The Killer Inside Me

Psycho Paths: The Killer Inside Me conveys the strange inner life of a man who can get away with murder. 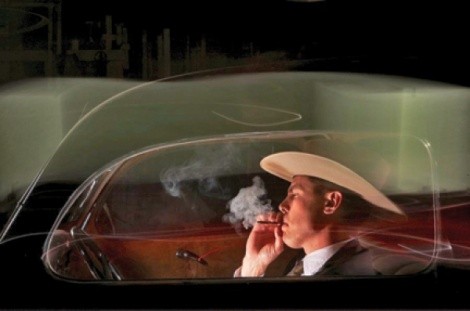 Lou Ford (Casey Affleck), a sheriff’s deputy in the early 1960s Texas town of Central City, does many deeply disturbing things in Michael Winterbottom’s adaptation of Jim Thompson’s The Killer Inside Me. But near the beginning, he says something nearly as disturbing: “The trouble with growing up in a small town is everyone thinks they know who you are.”

It takes a while for the significance of that line to sink in, as the story explores the pool of corruption beneath Lou’s polite facade. First, he gets involved with Joyce (Jessica Alba), the prostitute he’s supposed to be running out of town. Then, he plots and carries out the murder of Elmer Conway (Jay R. Ferguson), the son of the local land baron (Ned Beatty) with whom he has a family grudge. And as a district attorney (Simon Baker) begins stripping away Lou’s alibi, Lou goes to ever more extreme lengths to cover his tracks.

The Killer Inside Me became instantly infamous at Sundance this year for a sequence in which Lou beats Joyce brutally, and it’s not easy to justify the duration of the scene—especially paired with another similar act perpetrated later in the film. But, it provides a jarring juxtaposition between the guy everyone seems to think Lou is and the interior monster he hides. Affleck’s performance sells that conflict brilliantly, both in the voiceover that hints at Lou’s own internal confusion and the empty stares that precede his flurries of violence.

Screenwriter John Curran’s attempt to untangle Thompson’s complex plot definitely results in some narrative flab, including the random appearance of a folksy attorney played by Bill Pullman as though he were being directed by the Coen Brothers. Yet without trying to make Lou sympathetic, The Killer Inside Me does convey the strange inner life of a man who can get away with murder simply because the people around him think they know what evil looks like.

THE KILLER INSIDE ME