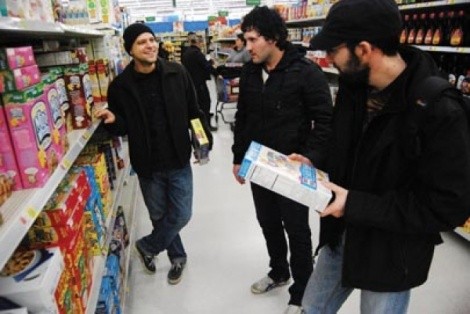 Daniel Fischer—aka Fisch—chooses interesting spots for interviews. When City Weekly interviewed his band the Rotten Musicians, it was at The Original Pancake House. For The Lazy Waves, Fisch’s new band with Michael Gross (Michael Gross & the Statuettes, The Brobecks) and Matt Glass (also of the Statuettes), it’s a McDonald’s inside Walmart. “[The Original Pancake House] was just because they had pumpkin pancakes at the time,” Fisch says. “They’re so kill.” Mickey D’s in Wallyworld, however? Simple convenience.

The Lazy Waves came together as expediently. Fisch, a veteran of another well-known local hip-hop group, Numbs, and half of the late Tooth & Nail trip-hop duo Furthermore, wanted to do more “singing-based, beat stuff rather than just rap.” Fisch met Gross two years ago while the latter was in The Brobecks, and they clicked. Fisch had “shotgunned” tracks out to local singers, and the scattershot caught Gross. “He was one of the few that actually responded with lyrics,” Fisch recalls. Mutual friend/studio rat Glass had an armory of recording equipment at his house, so he recorded Gross’s vocals for what became “Sundown.”

Gross said Fisch’s staticky, laid-back groove reminded him of an evening in late spring or early summer when he was planting a garden, and “other nice things.” Glass picked up on the vibe, adding keyboard textures to flesh out the song, which bloomed into a lazy, hypnotic wave of indie pop and feel-good Philly soul. “I was just happy that it wasn’t a rap song,” Fisch quips. “It’s not rap and it feels good, which was new for me.”

He started making more beats “specifically for Mike.” Glass continued to record and embellish them. Soon the band that didn’t mean to be a band had enough songs for an unintended eponymous debut. “After a year of it just sitting around, we just decided to gung-ho it,” Gross says—at least as far as pressing several hundred copies of the disc, sending some out to radio stations and music publications and offering it for free download on BandCamp.com.

Fisch is busy with Rotten Musicians, Numbs, Fisch Loops, Dani Lion and sundry other projects; Gross has Michael Gross & the Statuettes. The Lazy Waves can’t gig because Glass lives in Michigan, where he studies photography at the Cranbrook Academy of Art. And even if they could play out, the three of them couldn’t faithfully reproduce the sounds without “a lot more musicians,” Gross says. For now, they record a song or two whenever Glass is home on break.

It’s a shame. The self-titled debut has legs. Although Fisch extols the virtues of his first not-rap project, the band’s sound has something for everybody—even underground hip-hop fans, who’ll respond to Fisch’s beats. In fact, a wide range of people from kids to MMA fighters to strip club bouncers have raved to City Weekly or the band about the album. “A lot of people from a lot of different backgrounds and tastes seem to be digging it, which is interesting,” Gross says.

That’s because, as well as being stylistically inclusive, The Lazy Waves’ songs have something for everyone. In fact, “Sundown,” as with the Paul Weller-meets-Death Cab for Cutie soul jam “Get Me Through This,” smoothly seductive “Groovin’ With Each Other” and haunted head-game lamentation “Cruise Control,” should have music supervisors from film and television slobbering because they’re cinematic and widely accessible.

True to their name and origin, though, the Lazy Waves are content to wait and see. Their press mailing went out “only to publications we thought would genuinely be interested in what we do,” Fisch says. “And President Obama,” interjects Glass. Other than that, “we told our friends about it,” says Gross. Word of mouth can dictate the album’s success; if something happens, something happens.

The tide goes out; the tide comes in. The Lazy Waves may not cause a tsunami, but they’ll certainly pull some of us out with them because they are so kill. Download their album for free (or buy a cheapo $5 disc) at TheLazyWaves.bandcamp.com.