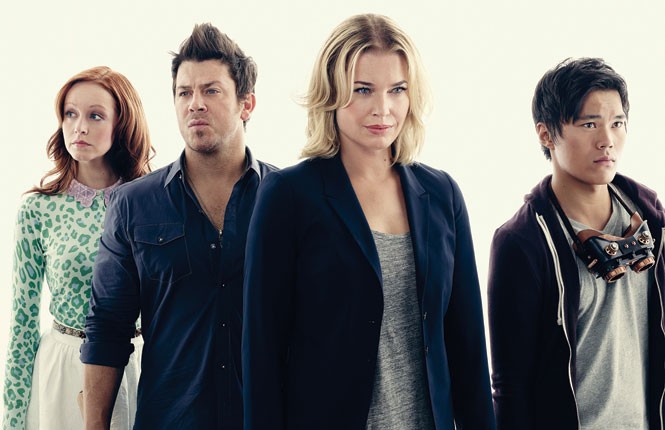 
Peter Pan Live!
Thursday, Dec. 4 (NBC)
Special: Last year, it was The Sound of Music; in January, it'll be The Music Man; tonight, Peter Pan—NBC can't launch a TV series anymore, but at least they have the high-school-musical market locked down. As with The Sound of Music, the hook (ha!) of Peter Pan Live! is the possibility that stars Allison Williams (as Peter Pan) and/or Christopher Walken (as Johnny Depp, er, Captain Hook) will blow a line or fall to their deaths In Real Time, because we are a nation of horrible, horrible people (or musical theater aficionados—same diff). And, is it just me, or does Williams in boy drag eerily resemble Jason Schwartzman? Probably could have gotten him waaay cheaper.


The Librarians
Sunday, Dec. 7 (TNT)
Series Debut: Noah Wyle's TV-movie adventure trilogy never topped the first outing, 2004's The Librarian: Quest for the Spear; follow-ups Return to King Solomon's Mines (serviceable) and Curse of the Judas Chalice (turrible) proved that Wyle and producer Dean Devlin couldn't just repeat the same quasi-Indiana Jones formula every two years and expect it to stick. Ten-episode series The Librarians wisely changes things up by relegating Wyle (as well as returning co-stars Bob Newhart and Jane Curtin) to the background and introducing a new team of magical-artifact hunters: Rebecca Romijn (as the military-trained muscle), Christian Kane (who usually plays the muscle; here, he's the brain), Lindy Booth (as a genius with heightened senses) and John Kim (as the obligatory tech-hacker). The Librarians retains the action and clever twists of the movie franchise, and adds the humorous ensemble friction/camaraderie of Devlin's previous series, the late, great Leverage. It's a splashy year-end capper to TNT's solid year of new originals (like The Last Ship and Murder in the First) and jettisoned dead weight (see ya, Franklin & Bash).


Mike & Molly
Monday, Dec. 8 (CBS)
Season Premiere: It's fitting that the worst comedy season ever (R.I.P. Manhattan Love Story, Selfie, Bad Judge, A to Z, Mulaney, Red Band Society and The Millers) is forcing CBS to call up one of the worst comedies ever to pinch-hit on Monday nights: Mike & Molly. Why CBS' audience rejects one laugh-tracked hackfest (in this case, The Millers) but embraces another year after year (Mike & Molly is now entering Season 5) is a mystery right up there with The Big Bang Theory (the TV series and the cosmological model). Fun fact: If you freeze-frame certain scenes, you can see notes Melissa McCarthy has placed around the set reading "GET ME OFF OF THIS SHOW!"


Sons of Anarchy
Tuesday, Dec. 9 (FX)
Series Finale: The #FinalRide nears the end and, as much as I want it to happen, I doubt Sons of Anarchy will grant my long-held TV wish of concluding a series by killing off the entire cast. The Sopranos, The Shield, Rescue Me, Breaking Bad, Boardwalk Empire, et al.—none of these greats dared to pull the final trigger, though Six Feet Under kinda-sorta did it with a fatal fast-forward in 2005. No, I predict that Jax (Charlie Hunnam, who finally learned how to act sometime around Season 2 or 3) and most of SAMCRO will live to ride another day in Charming, the most erroneously named town in America. Also, that series closer "Papa's Goods" will run three hours, 70 minutes of it strictly musical montages, followed by a two-hour Anarchy Afterword discussion with a bottom-screen crawl of every "Hamlet on Harleys," "Sopranos on scooters" and "Charles in Charge on choppers" reference ever made by TV critics about SOA. But seriously: Thanks for a fantastic, flawed, exciting and maddening series, Kurt Sutter.