FRIDAY 11/1
Pioneer Theatre Co.: The Lifespan of a Fact
In a time when the phrase "fake news" has become a weapon wielded against journalism, it's tempting to focus on that idea when considering a play about the facts of a story colliding with the truth of a story. But for cast members of Pioneer Theatre Co.'s production of The Lifespan of a Fact, the issues involved are more complicated than determining what really happened.

Adapted from the book by John D'Agata and Jim Fingal, The Lifespan of a Fact explores events surrounding the publication of writer D'Agata's essay "What Happens There"—about the culture of suicide in Las Vegas—by The Believer magazine in 2010. Fact-checker Fingal discovered that descriptions in D'Agata's literary approach to the story didn't hold up to scrutiny, leading to conflict over whether the work was journalism, or a work of fiction meant to deliver an emotional truth.

According to actor John Kroft, who plays Fingal, The Lifespan of a Fact is "about the relationship between two ideas of the 'truth': what's accurate and what's profound. And how do we reconcile these ideas? ... D'Agata makes really interesting arguments in interviews he's given about how essays are an undervalued form, how misleading the genres we currently use are, and how immature the public is still in terms of how they see the relationship between the author and their work."

Ben Cherry, who plays D'Agata, adds, "Essayists are notjournalisticreporters of facts, but instead are artists who hold up the mirror to humanity and highlight greater truths .... Injournalism, facts are central; in essays, the writer is central." (Scott Renshaw)
The Lifespan of a Fact @ Pioneer Theatre Co., 300 S. 1400 East, 801-581-6961, Nov. 1-16, dates and times vary, $33-$47, pioneertheatre.org

FRIDAY 11/1
An Other Theater Co.: Doubt: A Parable
Modern theater often shares certain truths and insights about our current culture and the tangled trappings of its internal intrigue.

John Patrick Shanley's Doubt: A Parable is one such work, and An Other Theater Co. deserves credit for recognizing its timeliness and importance. It finds Sister Aloysius voicing her suspicion that the local priest, Father Flynn, might be acting inappropriately with one of his students, and she makes it her mission to uncover the truth. However, when reverence and religion enter the fray, essential facts are difficult to discern.

"We live in a world in which the system often tries to shield people from the truth, whatever that may be, and this is exactly the situation Sister Aloysius is working with in the play," producer and director Taylor Jack Nelson says via email. "We should always believe victims, but how do we function in a world where victims are often discouraged from coming forward?"

Fortunately these days, sexual bullying is being called out and its perpetrators held accountable. Doubt: A Parable reflects that determination, and offers an example of its own. People responded by awarding the play the 2005 Pulitzer Prize for drama, eight Tony award nominations and four Tony wins, including Best Play. Likewise, when the work was adapted for film, it garnered five Academy Award nominations. 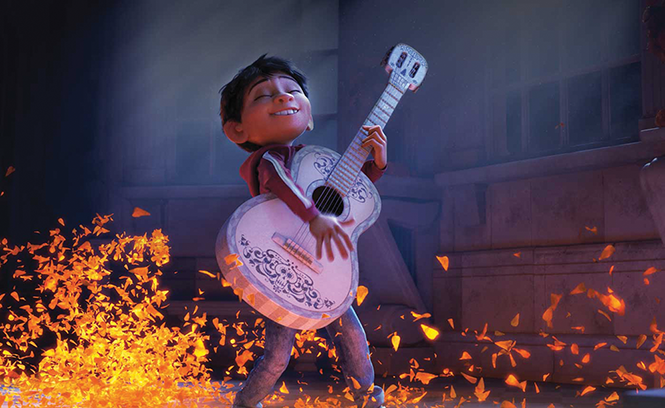 SATURDAY 11/2
Utah Symphony: Disney/Pixar's Coco in Concert
There's a pragmatic goal at the heart of the recent trend by symphony orchestras around the country to perform live accompanying beloved classic films: For some folks, it might be the only time they'd be interested in visiting a symphony hall. If the goal is to introduce a different audience to the majesty of live symphonic music, it's also worthwhile to make that movie experience family-friendly. And it's better yet if the movie itself is built on the emotional power of music to connect people.

Disney/Pixar's 2017 feature Coco won Academy Awards for Best Animated Feature and for Best Original Song ("Remember Me"), and made more than $200 million at the domestic box office. It tells the story of Miguel, a 12-year-old Mexican boy who finds himself on a Día de los Muertos visit to the Land of the Dead. Accompanied by a comical spirit named Hector, Miguel undertakes a journey to understand buried parts of his family history, and perhaps re-connect his family with the music that they have shunned.

The timing of Utah Symphony's performances is no coincidence, of course. This weekend marks part of the multi-day Día de los Muertos celebrated by many Latin American cultures, and provides a perfect cap for the Halloween season. Whether for a chance to see the stunning and colorful Coco on the big screen once again, to appropriately commemorate Día de los Muertos or to experience Michael Giacchino's glorious score performed by the talented musicians of the Utah Symphony, this is an experience that shouldn't be missed. (SR)
Utah Symphony: Disney/Pixar's Coco in Concert @ Abravanel Hall, 123 W. South Temple, 801-355-2787, Nov. 1-2, 7 p.m., $20-$80, utahsymphony.org

Follow the adventures of Brad and Janet (Barry Bostwick and Susan Sarandon), who are lost in a rainstorm and have to seek shelter in the castle of Dr. Frank-N-Furter (Tim Curry), a bizarre scientist from the planet Transsexual. Through elaborate dancing and singing, the doctor unveils his latest creation, as the newlyweds lose their innocence in a houseful of wild characters.

Paired with the screening will be live "shadowcasting" by the Latter-day Transvestites from Out of the Shadows theater group. All ticket prices include a Tranny Pack filled with props, and audience participation is encouraged. Doors open 30 minutes prior for the pre-show.

In addition to Halloween, SLFS hosts a special screening with co-star Barry Bostwick on Saturday, Nov. 2. "I can't tell you the number of people who come up to me and say it was one of the most meaningful—if not the most meaningful—moments in their lives when they first saw that movie and were part of the audience," Bostwick said to the Press of Atlantic City in 2015. (Colette A. Finney)
The Rocky Horror Picture Show @ Tower Theatre, 876 E. 900 South, 801-321-0310, general seating, Oct. 31 @ 8 p.m. and midnight, $20; special showing with Barry Bostwick, Nov. 2, 6:30, $35-$100, 18+, saltlakefilmsociety.org