Our annual offering to the local music gods. 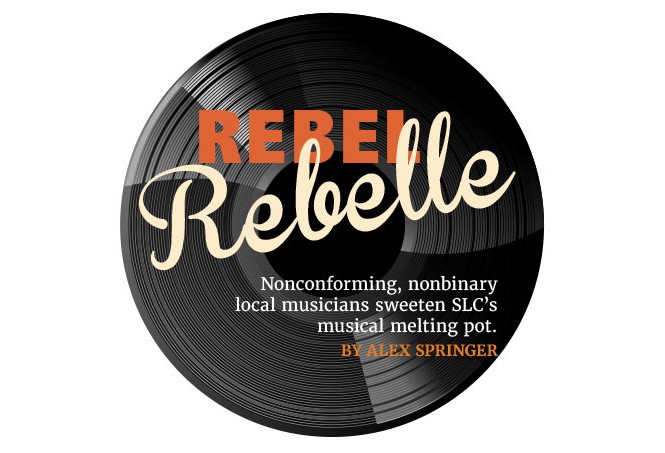 When musicians like David Bowie, Patti Smith and Prince started using their gender-bending aesthetic to create popular music, it paved the way for mainstream artists like Lady Gaga and Billie Joe Armstrong to be more open about their own sexual identity. With conservative whackjobs becoming more prevalent in Congress, it's suddenly more important than ever for LGBTQ artists from all walks of life to build upon that foundation. There are a lot of people out there who desperately need to see their own gender and sexual identities reflected in their favorite artists—and it doesn't hurt if those artists just happen to make kickass music in the process.

While this is a universal need among our country's population, Utah's local trans and gender-nonbinary music scene is particularly important. Despite turning Salt Lake County blue last November, our state continues to be a deep red—a reality that becomes more sinister with each day that the Donald and his legion of doom control the government. The musicians that comprise some of Utah's most talented trans and gender-nonconforming outfits are not only building an inventive music scene along the Wasatch Front, but they're shredding it on stage for every Utahn who has ever felt marginalized because of their gender identity.

When Tess Bybee of Provo-based freak-folk band Batty Blue got started as a musician, gender conformity was something that they struggled with. "At some point I was taught that women needed to be a certain way or do certain things as musicians," they say. "As I got older, I realized that those things don't have to apply to me. When I came out as nonbinary, it just felt really right."

When discussing gender fluidity and its impact on rock music, Bybee cites glam and disco as milestones. "A lot of art and counterculture comes from the queer community. It's a common thing among queer artists because they're somewhat ostracized, so it makes sense for them to band together," they say. "I think queerness shaped culture more than people realize."

It's a cultural movement that Dahlia Bratt of darkwave maniacs Vengeance Tampon has recently seen gain traction. "There are definitely some strong trans and gender-fluid artists out there, and I think it's become more relevant today," she says. "People are really putting it out there and making a statement about gender." As a transgender woman herself, Bratt is no stranger to the intolerance that the LGBTQ community often faces in Utah. "There definitely is an audience, especially here with so many people that are juxtaposed against the system of the Mormons," she says. "They want to come out and find a safe queer space, and that's how the whole band was inspired to begin with."

Artists like Elytra's Scotty-Ray Phillips have actually used their music as a platform to help educate others about gender issues in our community. Phillips was recently contacted by a social worker who works with younger clients that are gender variant. "He showed them my music and has just recently asked to introduce me to their parents so they have someone to talk to," Phillips says. "I'm not really setting out to be a queer activist, but if talking to me could help a parent understand their child better, what more could I ask for? It's a huge honor."

Sofia Scott, aka The Rock Princess, sees this burgeoning community as a great place to find collaborators. "I take a lot of inspiration from Dave Grohl," she says. "He started writing his own music and he was just able to find people to collaborate with." The Rock Princess recently tore the roof off of Kilby Court, but she is quick to note that it hasn't been easy. "The hard part is that it's kind of a niche market, especially here in Utah," she says.

Peach Dream guitarist Paula Bravo recognizes the struggle that gender nonconforming artists face, but they also recognize that things are evolving. "There's definitely a lack of representation for trans and non-binary musicians, but that is gradually changing because so many folks are engaged in the work of raising gender awareness," Bravo says. "I'm hopeful that more people will grasp the importance of all identities so that we can become a more inclusive music scene."