A routine GRAMA request morphs into a 13-month quest.

Most newspaper reporters older than Facebook recall a time when police stations offered their police reports in a fat, paper jumble known as the media "stacks."

Every couple of days, a reporter would amble into a police station lobby, show a press pass and spend the morning sitting on a hard plastic chair with the stacks, pausing to observe the others who wind up in a police station lobby: a crying woman, mascara smeared across her face; a wild-eyed man reeking of booze, trying to report his bike stolen; an officer coaxing a woman wanting to file a domestic-abuse complaint into a more private space.

Picking through the stacks—an unedited preview of a couple days of life in a town, as seen by the police—was a way to generate story ideas, from a popular police blotter full of comical crime blunders to seeing which elected officials tried to drive home drunk.

Today, obtaining and viewing police reports is a much more complicated—and expensive—matter. In Salt Lake City, a police report costs $5.09. If it is deemed that the police must redact private information from the report (most names, all addresses, phone numbers and other formalities are usually redacted), the costs can rise quickly.

Taking a look at a police report can also be time-consuming. In Salt Lake City, reporters must file a Government Records Access and Management Act request. A governmental entity doesn't have to respond to a GRAMA request for 10 days—meaning that a routine police report needed for a story in tomorrow's newspaper will have to wait.

On Feb. 24, 2015, City Weekly requested a big police report from the city of Salt Lake: The Elizabeth Smart police report. No one, it had been told to a City Weekly reporter, had ever bothered asking for it. Or, if they did ask, they didn't ever see it.

Much has been written about the June 5, 2002, disappearance of Elizabeth Smart. Her uncle, Tom Smart, 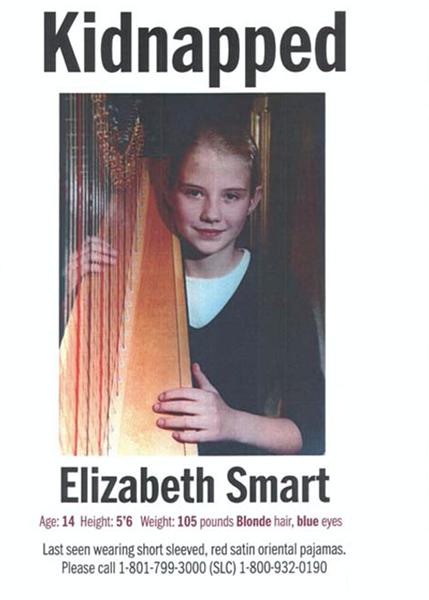 penned a book about the investigation, and several other books have appeared, as well as a made-for-TV movie.

None of this work, though, apparently relied on the bedrock of information about the investigation contained in the police reports.

So, City Weekly asked—not because the newspaper has any particular interest in the sordid details behind the Smart case—but because police reports shine a light on the manner in which the lawmen investigate crimes. And, for those now-graying reporters who witnessed the days of the media stacks, police reports are pretty basic, and often pretty great, public documents. Here's a fictional example: "Reporting officer responded to the 2100 block of Joe Avenue, spoke to Jane Doe about John Doe. At 1355, John Doe, DOB 1-1-1982, became crazed while watching the Utah Utes lose at football to BYU. At the conclusion of the game, score 31-10, BYU, John Doe leaped over the fence, broke his ankle on a toy dump truck, and thoroughly ruined his BYU-loving neighbor's victory barbecue. The neighbor declined to press charges, but Jane Doe insisted John Doe spend a night in the can."

After some routine requests for extra time, the Salt Lake City Police Department's GRAMA coordinator, Candee Allred, said that city attorneys were concerned that releasing the document would run afoul of a gag order issued during the trial of Elizabeth's kidnapper, Brian David Mitchell.

On Aug. 11, 2015, Allred wrote that the gag order had never been lifted and denied City Weekly's request.

A spokesperson for the U.S. Attorney's Office, however, told City Weekly that, as is the case with all gag orders, the one handed down in the Mitchell trial dissolve at the conclusion of a case. Therefore, in the case of Mitchell, the gag order would have certainly expired on May 26, 2011, when he was sentenced to life in prison.

The dialogue with Salt Lake City was reopened, and during the fall of 2015, the city said it would release the report. Work commenced on redacting portions of the report that the city deemed private. This redaction work was extensive, consuming 95 hours of Allred's time. The city's $5.09 charge for police reports is only good for 50 pages, meaning that City Weekly would be charged 10 cents per page thereafter, totaling $152.89.

For Allred's time, an $11-per-hour fee was established. After 95 hours of redacting, that fee was $1,045. Plus the per-page cost, the total bill for the Elizabeth Smart police report was $1,197. Fortunately, a true-crime writer in Colorado requested the same report on Oct. 1, 2015. Salt Lake City officials explained that they were willing to split the costs, 55 percent, or $652.85 for City Weekly, a prize for asking first, and 45 percent to crime writer.

City Weekly, citing provisions under GRAMA that allow government agencies to waive fees for documents if dissemination of those documents is for the public good, appealed the fee to the city's chief administrative officer, who denied the request. City Weekly then appealed to the Utah State Records Committee.

Before a hearing on the appeal could take place, though, a mediation session was arranged by Rosemary Cundiff, the state's government records ombudsman. Senior Salt Lake City Attorney Mark Kittrell a, City Weekly reporter and Cundiff sat down to talk costs.

While discussions that take place during mediation are confidential, the outcome is not. City Weekly and Kittrell agreed on a $200 price tag for an electronic version of the police report.

On March 3, the police report was provided to City Weekly via a secure email link. You can read through the report yourself below.

Although easy enough to follow, nearly every name of every person contacted by the police during the nine months that Elizabeth was missing had been redacted. Even the name of Richard Ricci, a handyman who had worked for eight months in the Smart home and died from a brain aneurism in prison in August 2002, was redacted. Ricci had been arrested on a parole violation shortly after being questioned by police about his relationship with the Smarts.

The city cited privacy concerns as justification for redacting the names of Ricci and others. But in the summer of 2002, the city wasn't overly concerned with protecting the identity of Ricci. One way or another, investigators' interest in Ricci's possible connection to the Elizabeth Smart disappearance was beamed around the world.

One thing is crystal clear in the police report, even with Ricci's name redacted: Police officers furiously went after him. They interviewed old friends, neighbors, people he served time in prison with, former bosses, coworkers and relatives. Investigators subpoenaed Ricci's telephone records and called every number that he had called. The police interviewed the people Ricci bought drugs from and people he sold stolen goods to. In the middle of winter, they traveled to a mine in Emery County that his grandfather owned.

But even though the report is readable with Ricci's name blacked out, GRAMA is not entirely clear, and there is little Utah case law for guidance, on whether a person being investigated, or merely contacted, by police, "constitutes a clearly unwarranted invasion of privacy" as the city contended.

Certainly, with regard to Ricci, about whom the police had widely commented publicly about in 2002, it was City Weekly's contention that the man's name should be left bare in the investigative documents. On March 28, 2016, City Weekly appealed the redactions to Mayor Jackie Biskupski's chief of staff, Patrick Leary, who swiftly denied the appeal. City Weekly once again appealed to the State Records Committee, and a hearing was scheduled.

But just as with the appeal over costs, state records ombudsman Cundiff arranged a sit-down between Kittrell and a reporter. On May 16, Kittrell agreed to reveal the names of Richard Ricci, his now deceased wife, Angela Ricci, and one other suspect involved in the case whose name was released to the press, in the police report.

Kittrell wasn't made available for comment for this story, and Salt Lake City Police Department spokeswoman Christi Judd did not immediately respond to an inquiry on why the city, for several months, believed that it could not release the Elizabeth Smart police report.

Joel Campbell, an associate professor of journalism at Brigham Young University, who helped craft GRAMA when it was etched into state law in 1992, says that over the years, media access to police reports and other police logs has eroded.

"I will say now, having requested records recently from cops, that whatever standard that was set by GRAMA has largely been ignored," Campbell says. "Today, it's very difficult to get chronological logs out of cops, let alone police reports."

With police shootings and sexual assaults on college campuses, there is little doubt that the public is interested in how police departments handle their business. But Campbell says it could be that the speed with which the media now demands information, the proliferation in government of public relations experts and fewer newspaper reporters asking to comb through the media stacks, has created an environment in which it is easy for the police to placate the media's needs with stories that it wants told.

An example, Campbell says, is a request he made for police reports, but was instead given a press release. "They kind of just created a new document," Campbell says of the agency he was seeking reports from. "I'm really worried that even when we get police reports, they're kind of giving it the public relations treatment."

The propensity of governmental agencies to charge for documents also inhibits public access.

In City Weekly's appeal protesting the cost of the Elizabeth Smart police report, an important irony surfaced: After the redaction work is complete on a report, and it is released to the media entity that pays for the document, any other media outlet can request the document and receive it for free.

In the case of the Elizabeth Smart police report, one way to look at it is that City Weekly was fiscally punished for seeking out a document that had never before been released.

This is one of the vagrancies in GRAMA that could stand to be amended. Of course, it is the government agencies that make cost an issue. While GRAMA clearly provides an avenue for the government to recoup expenses accrued while preparing public documents for release, it also allows these same entities to waive fees when it is determined that release of the documents benefits the public, rather than an individual. And one way to define public good, GRAMA says, is if the documents are being used by the media; the presumption being that a reporter isn't requesting the document for personal use.

As good as GRAMA can be at providing an avenue for citizens to obtain public documents, Campbell says he has witnessed what other reporters have gleaned: that GRAMA is an inconvenience to government entities, and that rather than presuming that all public documents are public, until proven private, GRAMA is often used in the opposite fashion, meaning that everything is private until proven otherwise.

"Our culture in Utah is to close it up, keep it away, don't share it," Campbell says. "It really should be the other way around."