The Also-Team: Every other minute of The Losers is stuff you’ve seen before. 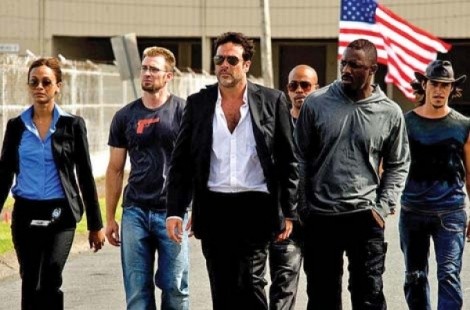 I realize there’s an A-Team movie to be released this summer, but I don’t think I need to see it now. After catching The Losers, I’m guessing I’ve pretty much got that ground covered.

Yes, this is the story of a group of highly skilled U.S. military operatives, set up for a crime they didn’t commit and out to clear their names. There’s a steely eyed leader (Jeffrey Dean Morgan), a handsome wise-cracker (Chris Evans), a snarling badass (Idris Elba) and the guy who can drive or fly anything (Columbus Short). Throw in a crack shot (Óscar Jaenada) and a mysterious woman (Zoe Saldana) out to get the same guy who framed our heroes and … well, you’ve gotta love it when a plan comes together.

But you don’t necessarily have to love the way that plan comes together. Director Sylvain White (Stomp the Yard) adapts the DC/Vertigo comic book in bursts of slow-motion walking and freeze-frame assassinations. Explosions and/or fire rock the house every 20 minutes or so like clockwork, bullets and fists fly, and there’s a discreetly-shot-for-PG-13-approval pseudo-sex scene. It’s like somebody handed a 14-year-old boy a “what do you want to see in a movie” checklist and a $60 million budget.

It’s fortunate, at least, that there are two energetic performances to distract from the other generic nonsense. Jason Patric slithers his way with a smile through his role as the black-ops-promoting villain Max, perfectly capturing a guy who knows he has power and loves using it. And Evans—erstwhile Fantastic Four Human Torch and soon-to-be Captain America—has just the kind of personality that makes even obvious punch lines and situations just a little more entertaining. The Losers needs every bit of the entertainment they can provide, since every other minute of it is stuff you’ve seen before—and, apparently, stuff you’ll be seeing again in a couple of months.%uFFFD