The Lower Lights: An LDS-Tinged Supergroup 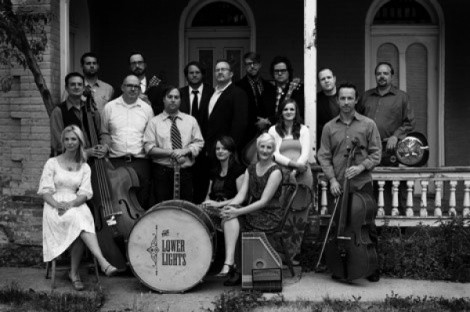 With 42 members listed in the liner notes of their debut album, The Lower Lights might be the largest band working in Zion, outside of the Utah Symphony. At the very least, the folk-gospel collective made up of indie rockers, alt-country cats and LDS pop-tinged singer/songwriters is one of the more ambitious—and unwieldy—local music projects in recent memory.

Not that you would notice, listening to the intricate vocals and stunning musicianship filling the 15-song A Hymn Revival, but the songs on The Lower Lights’ album are the result of spontaneous song-crafting and ad hoc arranging, all undertaken in a burst of spirited inspiration over five days in fall 2009.

Scott Wiley, who recorded the project, said the basic idea was to invite a slew of artists to bring a favorite hymn to the studio to add to the mix of potential recordings. With five days to play with, Wiley found some folks hanging out for the duration, while others dropped in for just an afternoon—a group including members of familiar Wasatch Front groups like Fictionist, Paul Jacobsen & the Madison Arm and Atherton, among others.

“As the recording progressed, groups would form, where somebody would say, ‘Hey, you want to do this song with me?’ And they’d go in another area of the building, in a hallway or warehouse or something, and work it out,” Wiley said. “Meanwhile, I’m in the studio recording a different song with a few people, and as soon as that would be done, we’d have another group coming in, saying, ‘Hey, we have this song ready.’”

The 15 songs that made it onto A Hymn Revival are beautifully played, sung and produced. And while the group is made up predominantly of Mormon musicians, the hymns tackled on A Hymn Revival are found in the musical canon of a number of religions.

“There’s quite a few on there that would be regulars in [LDS] church, but some of them, like ‘Swing Low, Sweet Chariot’ or ‘This Little Light of Mine,’ they’re not in the hymn book,” Wiley said. “We did a couple of Hank Williams’ old spirituals. A couple others, like ‘Jesus, Savior, Pilot Me,’ is in the hymn book, but isn’t necessarily an LDS hymn. We changed the melody and actually used one that Ralph Stanley had done on a record. We thought it was a little cooler.”

The end result is a musical experience striking in its beauty, even for listeners not interested in the gospel messages. And despite the unpredictability of which members will show up to the studio or The Lower Lights’ semi-regular live performances, Wiley and his cohorts plan on making the group an ongoing entity. Tours of the Pacific Northwest and Arizona are planned for the winter, and another album set for 2011.
For Paul Jacobsen, The Lower Lights project is unlike anything he’s done before.

“It was weird because it was so effortless,” Jacobsen said. “It’s a pretty remarkable thing. Egoless. There was something kind of cool about that.”

Secret Prayer from The Lower Lights on Vimeo.