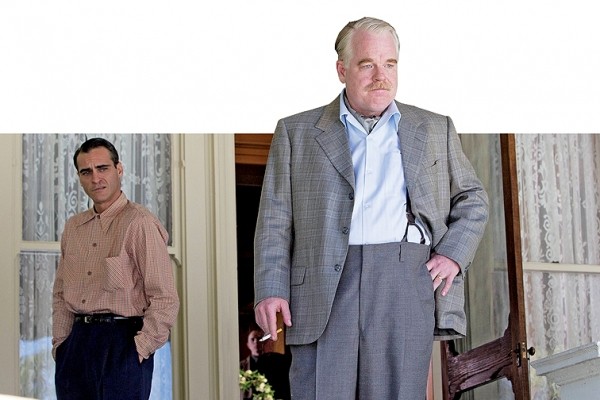 Is The Master—Paul Thomas Anderson’s hauntingly intimate epic—about Scientology? That’s been the focus of attention for many with only peripheral interest in the film itself, hoping perhaps for some kind of searing roman-Ã -clef takedown of L. Ron Hubbard and his movement. And, after all, it’s easy enough to do a certain kind of math in putting together the inspiration for Lancaster Dodd (Philip Seymour Hoffman), the author/philosopher/guru from whom the film takes its name. If you’re looking for clues that “The Cause” is in fact a thinly disguised stand-in for Dianetics, you’ll find them.


That’s because there’s more to the story of Dodd and his relationship with Freddie Quell (Joaquin Phoenix), the itinerant World War II veteran who stows away aboard a yacht that Dodd and his followers are using to travel from California to New York in 1950. Freddie is a profound mess of a human being, creatively and self-destructively managing to find something to drown his misery in concoctions that involve everything from Lysol to paint thinner. In a brilliant introductory half-hour that follows him from screwing around in the South Pacific waiting for the end of hostilities in 1945 through disastrous attempts at holding down a job, Anderson makes it clear that it isn’t just the horrors of war that wrecked Freddie. He’s exactly the kind of “animal” that Dodd’s program assures his followers they are not.


It’s that animal side of Freddie that seems to fascinate Dodd—who takes the damaged young man into his inner circle—and it’s exactly the promise of healing that inspires Freddie’s fast devotion to Dodd. Anderson stages a magnificent single-take sequence in which Freddie submits to a “processing” session by Dodd, answering a series of probing, rapid-fire questions about his life; it should be on film-school syllabi for decades to come as a paradigm for providing necessary exposition. And it’s only one of the many moments that brings Phoenix’s ferocious performance into focus as a personification of pure, seething pain.


But part of what makes the relationship between Freddie and Dodd so compelling is that it’s not necessarily a relationship between opposites. Hoffman’s performance may be even more complex in its way, as he captures the charisma and intensity that makes Dodd a convincing object of devotion while also exposing his own undercurrents of ferocity. There’s a terrific, startling scene in which Dodd responds to a skeptic’s probing questions about “The Cause,” punctuated by Dodd losing his cool and calling his opponent “pig fuck.” This isn’t the rage of a charlatan who fears being exposed; it’s the rage of someone who desperately wants to believe that his own methods can work. The pragmatic side of preserving the movement is left to his wife (Amy Adams), who—in yet another memorable scene—shows she understands exactly how to manipulate Dodd’s animal side to steer him in the right direction.


As a result, The Master is far from a portrait of a broken soul manipulated by a self-serving, cynical con artist. If anything, it’s a study in how a cult is a symbiosis—followers with a need for a belief system that gives them purpose colliding with a leader whose followers give him purpose. Anderson transforms that relationship into something that is, fundamentally, a dysfunctional co-dependent love story. Freddie needs “The Cause” to be his answer enough that he’s prepared to beat the crap out of anyone who challenges Dodd; Dodd needs to be able to cure Freddie enough that Freddie’s willingness to walk away before the work is done could feel like the ultimate betrayal.


So sure, in a way, it’s about Scientology, just as it’s about any movement that finds a profound connection between an initially sincere quest to change the world and those who cling to the possibility that it just might. But the “what” of talking about The Master risks slighting the “how” of Anderson’s accomplishment: the breathtaking sequences of the film’s opening hour; the subtly crucial subplot involving Freddie’s relationship with a teenage girl as his beacon of a possible normal life; evoking two nearly perfect performances. Not a moment of The Master feels constructed as an assault on any particular belief system. If anything, it’s profoundly compassionate toward the animal always at war with our fragile grasping at a better, more connected humanity.