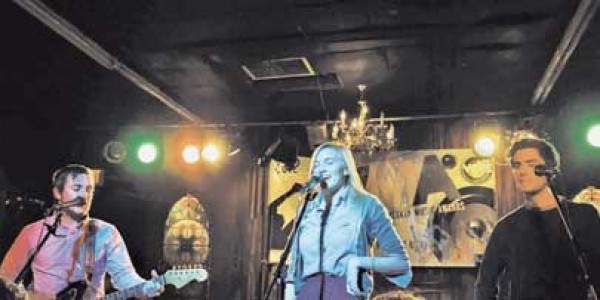 In 1821, Cherokee silversmith Sequoyah finished his creation of the Cherokee alphabet, making reading and writing in that language possible for the first time. Now, 188 years later, Provo folk-rock band The Mighty Sequoyah is making music, and have found a place in the heart of Provo’s ever-expanding music scene.

“And I thought [the name] sounded cool,” he adds.

Darger has been creating and playing music under the moniker The Mighty Sequoyah since high school, when he started the project as a solo musician. It has since cycled through several members before solidifying its current lineup in September 2011.

In June 2011, The Mighty Sequoyah released their debut album, Relative, and completed a short West Coast tour promoting that record. That garnered them inclusion in the 2012 City Weekly Music Awards, where they played a stunning set at Velour. And now, the band’s second album, Sunken Houses, showcases the band’s growth and development over the past year.

“If you listen to Relative, it’s a fragmented bunch of songs, because it was recorded in a process of a year in five different studios whenever we had money to record a song, with whoever was in the band, in whatever style I was writing in at the time,” Darger says.

Unlike the previous record, Sunken Houses was recorded entirely at Black Pyramid Recording in Provo, which drummer Bret Meisenbach co-owns.

“Bret knows a lot about engineering, so we’ve been able to tap into those skills a lot,” says multi-instrumentalist Alex Woods. “And also unlike the last album—even though I wasn’t much a part of that—all the songs have a similar tone. They’re all in one place and are a lot more cohesive than the last record.”

Darger says that most of his songwriting stems from social as well as spiritual issues, yet he’s quick to note that his music is not meant to isolate anyone or condemn any certain behavior. Rather, it’s meant to create conversation and “to get what’s inside out.”

“One of the messages for this new album is overconsumption in America,” Darger says. “We’re not claiming to be this super green band running on hybrid vans or whatever, but we do see the waste in America and the imprint and effect big countries like this have.”

While Provo has its fair share of folk bands currently circulating through the scene, The Mighty Sequoyah does anything but blend in.

The band’s ability to create beautiful four-part—sometimes five-part—harmonies is one of the most impressive things about their sound; it also adds to the caliber and energy of their live performances. Add to that extremely well-written songs and the incorporation of various instruments like the violin—played by Hannah Matheson—harmonica and piano only further enhances The Mighty Sequoyah’s unforgettable sound.

Following the release of Sunken Houses, the band is hitting the road for both a West Coast and an East Coast tour this summer. But for now, the band is still focusing on getting that darn album out.

“Mostly we’re just hoping it’s done in time,” Darger says, laughing. “It’s recorded ... but we’re working on mixing and still trying to hammer out album art and make it the best that it can be.Â