Time After Time: The Moondoggies are inspired by the past, not beholden to it. 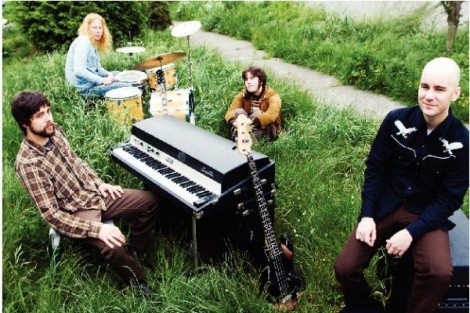 Kevin Murphy once believed he had reached a time where he’d heard “most good old music.” Though he now considers that outlook as “very ignorant,” it’s curious to wonder what he might be doing if he hadn’t been taken notice of an Americana group that certainly fits the criteria of “old.”

After wrapping up a practice with garage rock act The Familiars sometime in the early 2000s, a friend of Murphy’s happened to play him The Band’s 1969 self-titled record. Even though he’d never paid much attention to them earlier, their “less is more” approach to folk/roots rock stood out. “It’s not too flashy. They’re just good songs,” says Murphy. “[The Band] seemed timeless, like The Beatles. They could always be good rather than fitting a certain mood.” Bored with disorderly racket, Murphy decided to pursue this new source of inspiration as The Familiars broke up. “It was one of those albums where you’re done with what you’re doing and you want to go down a different path.”

The path of The Band sent him away from home: In 2005, he left Bellingham, Wash., on a ferry to the scenic city of Ketchikan, Alaska. He took a job to support himself, and spent the lion’s share of his four-month stay tinkering with a style he was creating. “In Bellingham, I was attempting to write bluegrass. I didn’t really know how to write songs,” he says. “I wasn’t having the best time up there. It was a way to get away.” Penning music became his priority. “Having nothing to distract me made [the writing] a bit better. The one person I knew had a girlfriend, so I was kind of on my own.”

Returning to Washington, Murphy met up with three longtime friends to forge The Moondoggies, a group that crafts rousing, revealing folk. In the same way that The Familiars took cues from proto-punk acts that established crazy reps in the ’60s and ’70s, his new band was in heavy aesthetic debt to country and Americana musicians birthed in the same decades. The press frequently likens The Moondoggies to remnants of a different era in pop—Gram Parsons, Crazy Horse, the Allman Brothers Band and, appropriately, The Band—but Murphy doesn’t think that his music feeds off of bygones.

“That stuff is timeless. I don’t know if [critics] are aware that there’s still lots of that going,” he says. “A good song in whatever genre is a good song, whether it has a pedal steel or lots of feedback. I like stuff like Animal Collective, but I don’t think that that is a requirement for contemporary music.” While he can understand the comparisons, allusions to The Byrds and the Grateful Dead amuse him most. “I’ve only listened to a couple of Dead records. I listen to Nirvana way more than I ever listened to The Byrds.”

Don’t Be a Stranger, The Moondoggies’ 2008 debut, frequently revisited one idiom with deep, aged roots: religious/semi-spiritual talk, by way of song titles like “Ain’t No Lord,” “Save My Soul” and “Jesus on the Mainline.” Murphy, who was raised Catholic but doesn’t currently practice, chalks that up to invoking the blues. “You have that desperate feeling of needing something to identify with. It’s something that’s always going to be [in blues].” Listeners might figure that they are a Christian band underneath, but “a lot of the songs aren’t the most positive use of those ideals,” assesses Murphy. “My mistake was having all [the religious imagery] in one album.”

With a sophomore record due in September, the guitarist/singer says The Moondoggies have a few fresh facets to reveal. Stranger was orchestrated in full before the band hit the studio and came out as they expected; they’ve been playful with the follow-up. “We spent more time not sure how things were going to end, or bringing people in to play different instruments.” He mentions a fiddle portion performed by a guest on one track that is later repeated in reverse. Elsewhere, they plug a pedal steel guitar into a Leslie amplifier, creating an effect that “makes it sound like a UFO.” There are bare-bones acoustic pieces and even a bit of alt-country. Unused Ketchikan-era material pops up, too. “It’s all across the board,” Murphy says.

All of this talk of stylistic choices leads one to wonder whatever happened to his garage rock side, yet he feels that he never truly left it. “I don’t think we’ve ventured too far from it. Sometimes, you want to be really loud, and sometimes, you just want to be singing harmonies with your friends because it sounds nice.”

Visualizing beyond the upcoming album, he imagines The Moondoggies going down a bevy of other roads, leaving what’s done behind. “I hope things are not what they were when they started,” says Murphy. “I wouldn’t want to be writing the same songs over and over.”

THE MOONDOGGIES
With The Duchess & The Duke
The State Room
638 S. State
Wednesday, March 24
8 p.m
TheStateRoomSLC.com