The (Mormon) Sex Girls Explain It All

"Desiring to desire," oral sex and becoming stewards of your own body 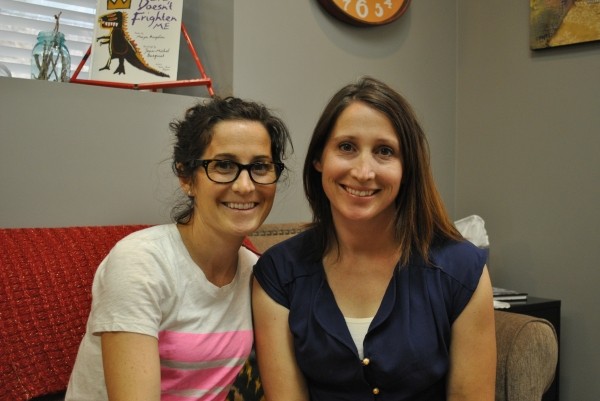 Sisters Kristin Hodson and Alisha Worthington are BYU grads, have degrees in social work and are active members of the LDS Church. They’re also known as the Sex Girls. Under that moniker, they answer callers’ sex questions on X96’s Radio From Hell; they’ve also written a straightforward book on sexuality, geared toward Mormon couples, called Real Intimacy (RealIntimacyBook.com). The two say their evolution into Utah’s resident LDS sex experts came naturally; they were raised by parents who encouraged critical thinking and answered all questions. Hodson, a mother of two, is a licensed psychotherapist who operates The Healing Group, a women’s mental-health clinic, in Holladay; Worthington, a mother of seven, is a sex & intimacy coach who says she’s always felt that she has a sign on her head that says “talk to me about sex.” On Sept. 14, from 9 a.m. to 4 p.m. at the Hotel Monaco (15 W. 200 South, Salt Lake City), they’ll be presenting a “tastefully sexy” workshop for women called On the Edge of the Bed. Visit TheHealingGroup.com for more info.

Why are two BYU grads trying to talk about sex in Utah?
Kristin Hodson: We’re trying to make it accessible to talk about, a bit lighthearted. I think that’s what people like about us. We’re professionals, but you don’t have to take this stuff so seriously. It doesn’t have to be so heavy, weighty, sacred every time.

What are some of the common sexual issues couples bring to you?
KH: Desire—for men and women. Frequency. Not wanting to try new things—and not even having a window to talk about it. We get these same themes presented in a variety of ways.
People come to us and ask, “How often should we be having sex?” Well, how often do you want to be having sex? And if it’s different, let’s teach you how to negotiate that. There is no blanket answer that will work for every body and every relationship.

AW: Sex is a skill, like anything else you’ve learned. We learned how to breathe, how to play the piano. This is a skill that you’re going to learn with somebody else, but still look at it as a skill, rather than something that’s just going to magically happen. It is important to understand your own body, and not expect your partner to understand your body better than you do.

Is having sex that important to justify a pricy workshop or therapy?
AW: I think most of the men reading this would be like, “Yes, I do need it.” It’s a little easier sometimes for women to put it lower on the list. The bonding hormone that you experience during sex is called oxytocin, and men primarily experience that through ejaculation. And that feeling for them lasts about two hours. For women, it lasts for about four days.

AW: It’s going to bleed into everything else.

KH: We talk about desiring to desire. It’s really an attitude women can have. A lot of women will say they want their husbands to be more romantic, but if they’re not investing in the passionate side and cultivating that, then they’re going to have a pretty bland marriage. Which I don’t think a lot of people want, as evidenced by Twilight.

AW: And I think it comes back to a lot of people being woefully uneducated about their own bodies. I think a lot of men would love to know how to please their wives, really help her feel aroused—and vice versa. A lot of women would really love to have this experience. But when a man doesn’t know how to help get a woman aroused in a way that she appreciates, it makes for dull sex.

KH: Some women are like, “Why am I doing this? It doesn’t feel good.” I’ve worked with women who’ve said, “Well, I’ve tried, and I feel nothing.” And I ask, “Well, what does ‘tried’ mean?” “Well, it was 30 seconds and I felt nothing.” But it takes about 20 to 40 minutes for women to really warm up. Some can warm up much quicker, the more in touch with your body you are. But that’s where some women can deem that they’re broken and not want to invest in sex anymore, and decide it’s not important because they have had bad experiences, so they make it not a priority, or avoid confronting what’s not working.

AW: Or they think it’s not working because it doesn’t look like it does in the movies.

AW: Marriages are no longer based on, “Well, we’ve got to keep the farm running, so I will stay married to you. We need to produce some children.” It’s based on emotion, and attraction, and if it’s not working, people are saying, “It’s not working. I’m moving on.” It has to be more of a priority.

If a woman is just dipping her toe back into the sex waters and her partner is ready to leap back in, how can they get a feel for where the other is?
AW: A woman will approach a man how she wants to be approached—she’ll go up and do some light touching, and he’s like, “OK, well, that’s nice.” And he’ll go up and just grab her boob. And she’ll go, “Whoa, whoa, that’s not what I want.” It’s about talking to each other, and being willing to say, “I like it when …” and learning about each other.

KH: And trust and patience. If your spouse comes to you and says, “I’m just dipping my toe in,” then you have to meet them there and build that trust to where they know they’re not going to be pushed further or taken advantage of. Sex dates help with that—scheduling time once a week where it’s sex. It’s not throwing it in after a Friday-night date night after you’ve gone to dinner and are totally full and you’ve gone to a movie and you’re both tired. It’s creating a time where you’re going into it knowing that you’re going to have sex. People say, “Oh, that’s so canned, it’s not romantic.” But you can be as spontaneous as you want after it’s planned.

It was a hard decision. And there was a point where we questioned, should we just pull the book entirely? Because we can’t not include this. But we found a compromise—they let us put a chunk of the chapter in there, and then point people to our website so the material can be there.

AW: I was doing a presentation recently, and two minutes before I went on, I told this man, a doctor, LDS, what I was presenting on, and he looked at me and said, “You’re not really going to present on that, are you?” and I said, “Yes, I am.” And he said, “No. Oh, no. There are things that are just too sacred, even for words.” And then he looked at me and said, “Ever.”

KH: We get calls all the time on X96 because they can be anonymous.

AW: I’d say that a good majority of our callers were LDS and had burning questions that they’d wanted to ask for a long time. Even masturbation—understanding your own body, “Is that OK?” We joke that there’s an idea in our culture that it’s OK for somebody else to touch our body, but we can’t?

Is oral sex forbidden by the LDS Church?
KH: No, except in myths and urban legends.

AW: And there could be some bishops who you go in and ask who are like, “Oh, no.” Again, it’s who you get.

KH: There’s only “don’t do anything unnatural,” or abusive or coercive. It’s pretty neutral. [Oral] is just part of marital bonding, part of the buffet of sexual experiences.

KH: But we want them to grapple with it, because that’s where they grow and evolve and become sexual agents.

Do the LDS Church’s rather vague rules about sex in marriage muddy things for couples?
AW: “Don’t do anything unnatural.” Well, what does that mean? Unnatural for some people might mean don’t French kiss, whereas unnatural for someone else might be don’t have sex with horses. I think a lot of couples struggle with this—one of them wants to have oral sex, and the other one is like, “That’s unnatural.”

KH: And giving into the carnal.

AW: I’ve worked with clients whose perspective is that sex is for the “natural man,” and “shouldn’t we rise above sex?” It’s dirty, it’s low.

AW: It seems that by not coming out and saying anything, there has been this vacuum, the culture has adopted strict, traditional Judeo-Christian rules.

KH: You have information on LDS.org from 1970, and so people will search something and not take into consideration that it’s from 1970. Now, the church is trying to back out of the bedroom.

And really, bishops have carte blanche to say yes or no, so it really depends on who your bishop is, on what kind of experience you’re gonna get. Same with your therapist—you can go to LDS Family Services and get totally different information there. Our big thing is that you are the steward over your body in your relationship. We can give you information, and then you can decide if that works for you, but we want people to talk to each other, to check with themselves, before they hand over all their stewardship to someone else to have them tell them what they should be doing with their body.

How long does it take to figure out sex?
AW: It’s going to constantly be changing—if you have health problems, pregnancy, age, whatever. It’s not like, “OK, after two weeks of our honeymoon, we have figured this out!” You figure things out, and then you’re renegotiating, and figuring it out again.