Drinking the beer is half the fun this week 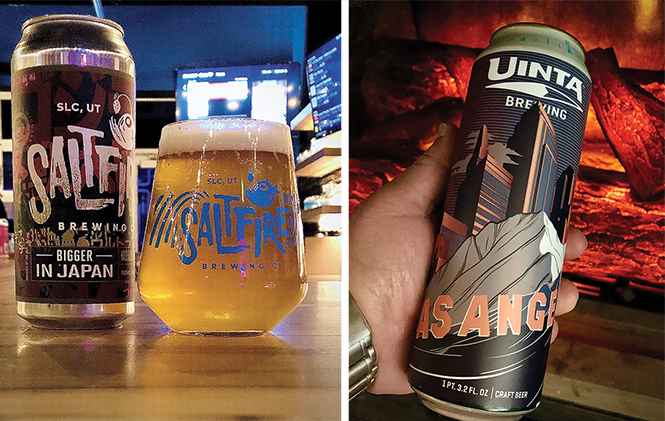 Craft brewers love to make their customers think about their beers. They are equally fond of the names they give to those beers. If you're in the know, you'll pick up these names pretty quick. If not, you better start asking your parents or siblings, because you don't want to get caught not knowing the name behind that tasty beer clinched in your mitts. Friends can be cruel.

Saltfire - Bigger in Japan: This gorgeous, classic-looking IPA pours a bright burnt orange with an off-white cap that won't quit. Punching the tab on the can was accompanied by an immensely pungent aroma—orange marmalade dusted in pure cane sugar is met with oozing evergreen sap. Toasted white bread crusts and zested tangerine peels represent themselves well, as all of these scents hold true from start to finish.

Orange candy hits first in the flavor. Fleshy citrus is defined in the foreground, similar to clementines. There's even an earthy note coming through; it sounds crazy as a combination, but it's wonderful. Bold, vague berries enter next, rounding out this implied fruit salad. I would guess there's some Idaho 7 and Mosaic hops here, as the finish is extreme with herbal and wet pine influence. "Extreme" is a good word to carry on with here. This beast starts off sweet, even slightly tart like a true citrus influence would bring. Despite its 9.1 percent ABV, it's smooth and even slightly crisp. Warming? Absolutely. And there's a bitter finish too, just the way I like it.

Overall: This here is a hell of a double IPA. Saltfire has really been upping their game, and beers like this prove it. If you're looking for an IPA that combines the best parts of the New England and West Coast styles, look no further.

Uinta Was Angeles: It's clean, thin and gold in the glass—looks like a domestic, to be honest. The beer does offer a decent lacing that I wasn't expecting. It smells like beer should smell: clean, while you really get the spicy noble hops coming through. It is almost grassy/earthy on the nose, like beer smells in Europe. I think they were shooting for a German pilsner with this one, but I'm getting more of a Czech vibe, which really works for me because I really like that style. I sense this may be a "chugging" beer.

It's not sweet, but it's close—bittersweet, maybe. The flavor explodes when you take the first sip, then changes and becomes more complex as you swallow, leading to a wonderful dry aftertaste that's long, but not too long. I have a few double pilsners in the fridge, and I actually prefer this one over them. It does feel a bit thin, but then dryness takes your mind away from it toward the back of the palate. There's a good amount of carbonation, which I expected, and it helps change the flavor profile by adding some CO2 bitterness.

Overall: This new 5.0 percent lager doesn't reinvent the wheel by any means, but it offers a nice spicy alternative if you're looking to get out of a rut. I think beer nerds are starting to rediscover pilsners, and this should be one stop on that reunion tour.

You won't be able to miss Was Angeles (an affectionate and budding term for the traffic clogged Cottonwood Canyons); the extra-tall 16-ounce cans are easy to spot. A portion of the proceeds from this beer will go to the Utah Avalanche Center. The kaiju-inspired Bigger in Japan is mostly available at Saltfire, but I have been seeing it pop up in some restaurants and bars around town, so keep your eyes opened for that. As always, cheers!