Surf's up in Provo 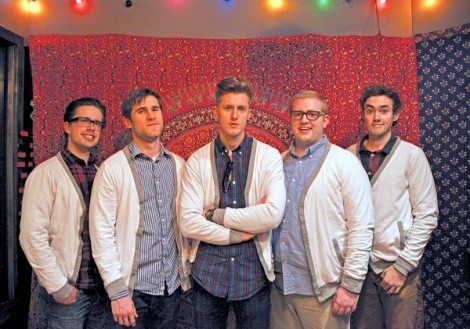 Right before the British invasion in the mid-’60s, surf-rock dominated the charts with singles from bands like The Beach Boys and The Surfaris. Currently, the genre has seen a large comeback thanks to bands like Best Coast, Surfer Blood and Wavves. And this breezy sound is also experiencing a swell in the tide within the Utah County music scene because of The New Electric Sound.

This five-piece plays simple, catchy surf-pop songs that combine the vintage tones of Buddy Holly, The Beatles, Dick Dale & the Del-Tones and the like with the more modern edge of bands like The Strokes and The Kooks.

“I think our name works because back when electric guitars were new, that was the new electric sound,” says bassist Tom Brinton. “Our style is kind of similar to when the electric guitar was in its infancy.”

Frontman and vocalist Scott Vance previously played in a couple of hip-hop bands before deciding to switch gears and form a band to provide an outlet for all the music he had in his head that he “didn’t really know what to do with.” Vance teamed up with Brinton and quickly brought on the other members in August 2011.

The band made their Utah County debut playing in various local battles of the bands. Although The New Electric Sound didn’t win any of the competitions, the guys in the band didn’t let that get them down.

“There’s no scientific method to [battles of the bands] at all,” Brinton says. “I’ve won them before in bands that sucked and lost them in bands that were good. So I don’t put much stock into them, but we play them because a lot of people come.”

To further enhance their simple, retro sound, the band uses mostly vintage equipment, from their old Crumar organ to the old-fashioned Super 55 microphones. “Even though we’re not always playing ‘vintage music,’ per se, just the fact that we’re playing vintage instruments draws that sound out,” Vance says.

Another fresh take the band uses is that at any live show, you’ll see the guys sporting matching outfits. “We just wanted to pull the things back that people are forgetting, like the matching cardigans, turtlenecks, whatever it is,” Vance says. “All the bands used to match. Nowadays, it’s rare.”

The New Electric Sound will enter June Audio Recording Studios in Provo during the first week of March to record their 12-track debut album. Several songs can be heard on the band’s Soundcloud page, including the excellent, reverb-y “Crimson Sky,” and the more surfy “Come on Over” and “Laura.”

To help cover the costs, the band has set up a Kickstarter page where fans can pledge any amount of money they want to help the band reach its $4,000 goal. “It’s kind of like people buy the album beforehand, which gives us money to record it and, when it’s done, we give it to them,” Brinton says. “So it’s like they’re investing in the band.”

The New Electric Sound hopes that by going back in time, they can create something new and fresh. And so far, it’s working in their favor. “One of my main goals is that I make something that’s so catchy that you’ve either sworn you’ve heard it before or you just can’t get it out of your head,” Vance says. “I just hope that people can—through our music—appreciate an earlier era and everything that goes with it: a simpler, more carefree time with fewer distractions. When things were cooler.”