Local rock & rollers The North Valley are all about the live show. 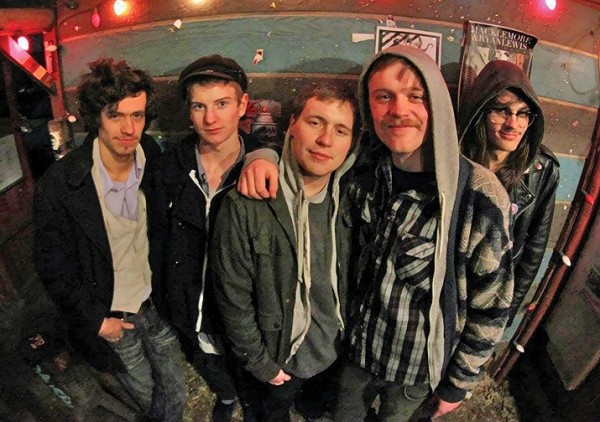 If you’re bored, something must change. That’s the conclusion that the members of local rock & roll outfit The North Valley came to, anyway, when they realized they’d reached a crossroads in their music.

The North Valley—named for Davis County, whence the five musicians come—first came together in 2011, after their respective musical projects fell apart. “When all those bands broke up ... we kind of wanted to pick people that we knew we wanted to play music with,” says drummer Spencer Sayer. “It just so worked out that all of them had their bands break up.”

Already acquainted through high school and collaborating in other bands, the pieces of the lineup fell into place effortlessly. Their sound, however, didn’t come together right away.

Today, a North Valley show is two parts in-your-face rock circus and one part dance party, with a sound that’s nearly unrecognizable from the scrubbed-up country/folk style of the band’s early days. “At first, it started out like a much more of a softer—kind of like Wilco—band,” says bassist/vocalist Dane Sandberg. “And then we discovered how boring that gets to play live.”

After taking an honest stock of the band members’ diverse influences—ranging from metal to classic rock to indie rock—they decided to branch out and find a harder sound that was not only a reflection of their personal tastes, but also more entertaining for them to play live.

“We were all listening to stuff that was way heavier than what we played, so it kind of just got to this point where [we said], ‘Well, we could just play that instead, that would be more fun,’ ” Sandberg says.

The ultimate turnaround happened “when we started playing live,” Sayer says. “We went through a phase where we played a show like every weekend. And at the end of that, our whole sound was just based on those crazy live shows.”

The new direction resulted in a highly dynamic creative process, which was enhanced when two of the band members moved into a house together. Now, The North Valley live and write music in the same space.

While in the older days, making music was “more refined, like worrying about song structure and … constructing actual songs,” Sandberg says, “it’s just all jam-based now.” Guitarist/vocalist Spenny Relyea adds, “Me and Dane will write like a third of the song and take it to the band, and then we’ll all finish it together. It’s super collaborative.” The lineup is rounded out by Jon Butler (guitar) and Kramer McCausland (keys).

So far, The North Valley has released The Bad Habits EP—originally released as a demo in 2012—and a single titled “You Got That Straight Jake.” Their upcoming debut full-length album, Patterns in Retrospect, which was recorded live with Casey Romney and is currently in the final mastering and printing processes, will be out Jan. 10. The band members agree that while their EP—about destructive decisions, vices and relationships—isn’t an accurate representation of their live sound, the new album will capture that energy and immediacy. “It’s much louder, it’s much harder, it’s much gnarlier,” Sandberg says.

The Southern rock/Americana-tinged Patterns in Retrospect will include a mix of revamped older songs (“Drink Alone”) and brand-new tunes such as “Never Had the Money” and “Barbed Wire Tongue.” The dark track “There’s Something About Murder” stands out with its down and dirty beat, gritty vocals and wailing guitar.

After the album comes out, The North Valley will depart on tour in the spring and summer, so catch them on local stages while you can.

“Shows are fun and it means the world to us,” Sayer says. “Just come to shows. You don’t even have to buy anything, just come to a show. Just be there. Just dance.”

“Just dance and get drunk and scream at us,” Sandberg adds. “Throw tomatoes or something.”