Nuke plant may be in Utah's future 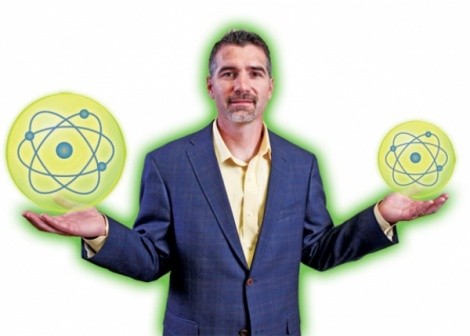 The first thing you notice is the landscape. Utah’s Emery County seems barren, the gray dirt streaked with black. Misshapen desert shrubs crouch and moan in the wind. To the west, the distant splendor of Capitol Reef seems small and stunted. To the east, the Book Cliffs impose their massive silhouette over a small town of just under 1,000 residents.

Green River’s teal-and-white community center sits just off the bucolic Main Street. Most afternoons, staff and volunteers are busy preparing for the after-school rush of children who make use of the center as a Boys & Girls Club. This afternoon, a windy day in March, Nancy Dunham meets a City Weekly reporter at the community center to explain her opposition to a proposed power plant that would sit just four miles from her rural home.

Dunham, a melon farmer who’s lived in Green River since 1955, believes the area she calls a “sanctuary” is being compromised for money and political power. Hands folded on the table and clear eyes staring earnestly, she asks, “Why give up a beautiful, virgin area, one of the few left in the country, for somebody’s dollar?”

Larry Carter, a Vietnam veteran, community center volunteer and Green River resident since 1968, enters the room with a quick, hearty laugh to join Dunham. In his thick Southern accent, he gladly shares his opinions on the plant: “They’ve got no business building a nuclear plant at the bottom of that canyon,” he says. “I’m not against nuclear energy, but I think there’s lots of places they can put it besides there.”

Entrepreneur Aaron Tilton feels differently. He sees Green River as “the premier location in the West” for his company, Blue Castle Holdings, to build two nuclear power reactors set to come online in 2023. At a cost ranging from $13 billion to $16 billion, and creating between 825 and 1,100 jobs, the plant would generate 3,000 megawatts while providing a much-needed economic surge for a rural southern Utah town where opportunity hasn’t knocked since the 1950s, when uranium was king.

Zina Willard, deputy director of the community center, steps out of the bustle in the kitchen to voice the isolation felt by many in Green River. “We’re kind of out in the middle of nowhere here. … We need all the help we can get,” she says.

Most Green River residents agree with Willard and express excitement at the boom the plant could bring to their town: jobs, an expanded tax base and a new industry. “I don’t really see the downside,” said Keith Brady, vice president of the Green River Chamber of Commerce, even as news of Japan’s disastrous nuclear-power-plant trouble is being broadcast from across the Pacific.

The first major hurdle on the way to Utah’s first-ever commercial nuclear generator is a decision by the state engineer of the Utah Division of Water Rights, who must decide whether Blue Castle will be allowed to divert the annual 53,600 acre-feet of water necessary for the plant from the Green River. (An acre-foot is the amount of water covering 1 acre to a depth of 1 foot—roughly 326,000 gallons, or 43,560 cubic feet of water. The average U.S. household uses about 127,400 gallons annually—a little over a third of an acre-foot—according to the American Water Works Association.)

Just over half of Blue Castle’s water will come from Kane County; the rest will be diverted from San Juan County. The leases to the water rights have already been purchased, but the state engineer will decide whether or not the plant is feasible and can environmentally justify the diversions.

According to assistant state engineer John Mann, the division has been gathering information for 15 months and will continue to do so until the state engineer is “comfortable [with] making a decision.”