The Office, Shit My Dad Says, Being Human, Episodes, Shedding for the Wedding 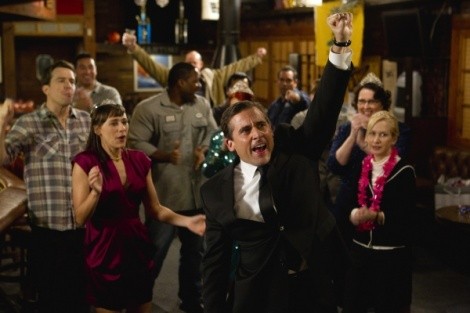 Everyone remembers the 2005 episode of The Office wherein the Dunder-Mifflin staff reads aloud from Michael Scott’s (Steve Carrel) screenplay for Threat Level: Midnight, an as-yet-not-produced action film about the suave, mysterious “Agent Michael Scarn” (Season 2, Episode 7). No? Anyway: Tonight, Michael finally unveils the world premiere of Threat Level: Midnight—and that’s not all! Past Office-mates Roy (David Denman), Karen (Rashida Jones), Jan Levinson (Melora Hardin) and David Wallace (Andy Buckley) pop up to make the situation even more uncomfortable/awesome. Is this potential Hollywood blockbuster Michael’s ticket out of Dunder-Mifflin? The departing Carrel only has a few more weeks left on The Office; could be.

Season Finale:
This Shit is finally over. Between My Dad and Mike & Molly, CBS forced two of the worst sitcoms in recent memory onto the ’Merican public this season. But since said ’Merican public has proven too dumb to flip the channel after hits The Big Bang Theory and Two & a Half Men, respectively, it could be argued that they deserved it—were asking for it, even,seductively dressed in those tight, straining sweatpants and KFC-stained wifebeaters. Fortunately, the Twitter-bred Shit likely won’t return next season, freeing star William Shatner to star in a new NBC crime-drama pilot based on a Foursquare badge, Mayor of Smack Town.

Being Human
Saturday, Feb. 19 (BBC America)
Season Premiere: While Syfy’s U.S. remake is nowhere near as bad as purists wanted it to be, the original U.K. Being Human is still unbeatable: It has mythology, scares, drama, laughs and, most of all, heart. Syfy’s Being Human is pretty and slick, but it’s a soulless clone with an expiration date. When last we left Mitchell the vampire, George the werewolf and Annie the ghost (yes, from the outside it does sound like a supernatural Three’s Company), they’d split Bristol after a minor vamp-ocalypse, and Annie was trapped in purgatory. Now seaside in Wales, Mitchell, George and new fourth wheel Nina (also a werewolf, thanks to George) struggle to either find a way to get Annie back, or let her go. When Mitchell finally does enter purgatory, he finds he’ll quite literally have hell to pay to bring Annie home. It’s one of the darkest (and funniest) Being Human episodes yet, and the American crew can’t touch it.

Episodes
Sunday, Feb. 20 (Showtime)
Season Finale: Speaking of British-to-American translations, Episodes (starring Matt LeBlanc as Matt LeBlanc) has pretty much erased any memory of Joey—who knew it would take a show about a spectacularly bad sitcom to redeem LeBlanc’s spectacularly bad decision to spin-off a sitcom from Friends? Meta. At the end of Episodes’ seven-week run, Brit writing couple Sean and Beverly (Stephen Mangan and Tamsin Greig) have had their imported comedy pilot and marriage torn asunder by idiot Yankees, and now comes decision time: Will the network pick up their bastardized show and bless/damn the threesome (who now all despise each other) to work together for a full season? As good as they are, I really only care about seeing more of Merc (John Pankow), the most deliciously slimy TV-exec asshole since the days of The Larry Sanders Show.