The One Mighty and Strong

The Best Satan Ever
In the modern Mormon church, contact with the spirit world is managed through rituals enacted in the temple. Inside, there are rooms depicting the world before and after the fall of man. Then there is the Celestial Room, which depicts the highest realm of heaven. Inside the Celestial Room, there’s a smaller room called the Holy of Holies, and when the prophet of the church wants to talk to God, he goes inside the Holy of Holies. There, he receives revelation concerning church doctrine and affairs. Everyone else stays in the Celestial Room and performs the sacred ritual of being “pulled through the veil.”

There’s an actual veil there, and live actors portraying God, resurrected beings, and the apostles John, Peter and Paul. They reach through the veil and pull patrons across to the other side, the Celestial Kingdom. This is a very sacred and very real thing for Mormons, like a trip to heaven and back. However, in order to get into the temple you have to have a recommendation from your bishop, and to get a recommendation you have to be a member in “good standing,” and to be in good standing you must follow a lot of rules. Most Mormons try to follow the rules, and most can get a temple recommend, if they want.

Mormons still believe in personal revelation, but church authorities now tend to downplay direct communication with God and instead encourage communion with the Holy Ghost, a warm and fuzzy experience sometimes described as a “burning in the bosom.” In order to survive and grow, the Mormon Church has become progressively more mainstream and status quo, for instance, they now allow black men to hold the priesthood and no longer practice “blood atonement” rituals in the temple. In 1996, President and Prophet Gordon B. Hinckley told Mike Wallace on 60 Minutes, “We’re reaching out across the world. We’re not a weird people.”

Still, sometimes there are “weird” ones among them, such as Brian David Mitchell’s father, Shirl Mitchell, who not only received word from God that he is the Christ, but transcribed visions and revelations revealing an entirely new cosmology, which he combined into a 900-page manuscript called Spokesman for the Infant God or Goddess. According to Mormon historian John-Charles Duffy (perhaps the only person who’s ever read the manuscript):

Shirl teaches that human beings collectively constitute the body of an infant deity, just as cells constitute our own bodies. The infant deity—the offspring of the sun, who is a goddess, and a male companion star—has been gestating over the last several million years of human evolution and is now ready to be born. This birth will occasion a radical transformation in society. In the new age following the birth of the infant deity, people will follow an all-natural vegetarian diet. Children will engage in erotic play without repression; teenagers will freely copulate for the purpose of procreation; and adults, having sexually satiated themselves during childhood and adolescence, will live in celibate ecstasy. ... Shirl writes of the “addictive voyeurism” that had him fondling young girls as a child and peeping into women’s windows as an adult. He complains that every woman is a manipulative nymphomaniac whom no husband could possible satisfy; he fears that his penis could be “strangled” during sex; he is fascinated by a recurring dream in which a shaft of light penetrates his anal chakra. Accused by his former wife of rape, Shirl defends himself by insisting that when rape occurs in marriage, it’s because wives withhold sex from their husbands and that there can be no “illegal rape” in a marriage anyway. (“The Making of lmmanuel,” Sunstone, Oct. 2003, p. 36.) 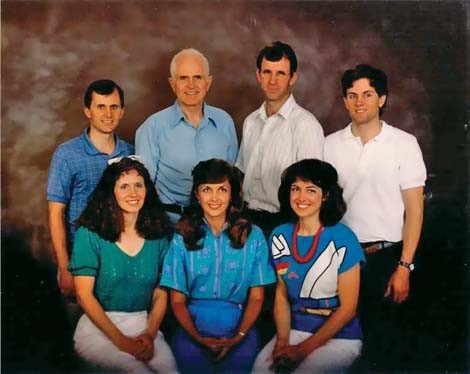 Shirl and his wife had six children, and Brian David was the third, born in 1953. They lived in a middle-class suburban neighborhood at the base of the Wasatch Mountains. As a child, Brian was a Cub Scout and played sports and went to church on Sundays, but when he was 16, according to his father, Shirl, Brian was found guilty of exposing himself to a child and sent to a juvenile delinquent hall. At 19, he impregnated a 16-year-old girl and then married her. They had two children then got divorced. He married again, to a woman who had three kids already; together they had two more. Then they got divorced. Then, his ex-wife Debbie Mitchell accused him of sexually molesting their 3-year-old son. Then he married a woman eight years his senior, Wanda Barzee, who had six children.

Until he was nearly 30 years old, Mitchell moved in and out of the church, sometimes professing to be an atheist. Then, according to Derrick Thompson, Mitchell’s stepson, Mitchell ate a large dose of LSD out in the Utah desert and realized God wanted him back in the Mormon Church. So, with Barzee, he set out to become a member in good standing. He worked as a die cutter in a jewelry store, she studied the organ, hoping to someday play in the Tabernacle. In his local ward, he became the second councilor to the bishop, a member of the church hierarchy, and volunteered to work in the temple as a live actor. 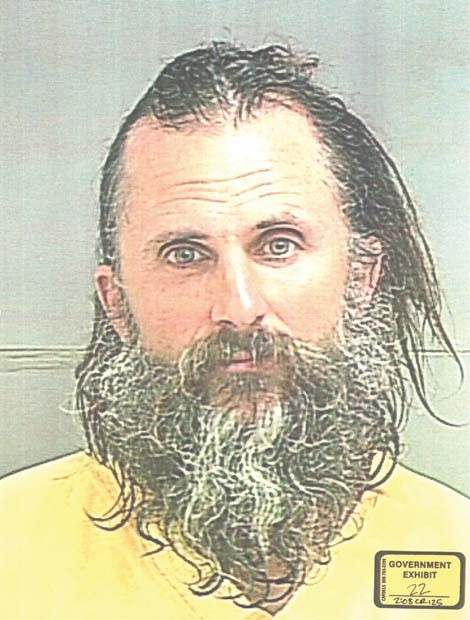 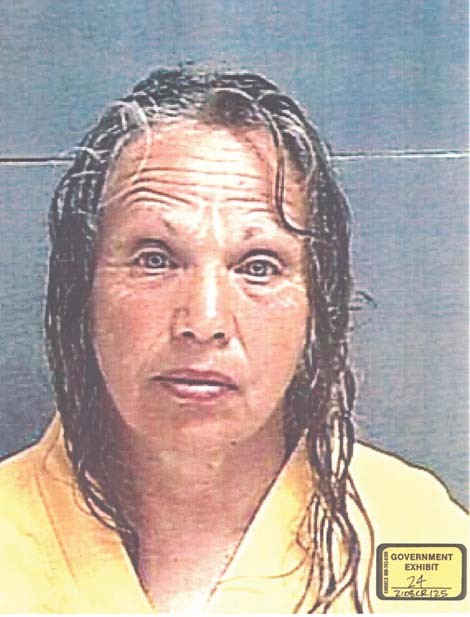 In the Salt Lake Temple, there’s a ritual known as “the endowment,” where volunteer actors portray characters from the Old Testament and present, in dramatic form, the story of man’s fall from grace in the Garden of Eden. According to Doug Larsen, a friend at the time, Mitchell played Satan, a part that required him to loudly proclaim that he is the incarnation of evil and has bought up armies and popes to work his will upon mankind. Mitchell loved this part and even bragged to a friend that he was perhaps “the best Satan ever.” Eventually, church authorities became concerned about his enthusiasm and asked him to tone it down.

After this, Mitchell and Barzee quit their regular jobs and hit the road, hitchhiking around the country for two years as itinerant preachers. When they returned in 1997, they were wearing costumes of religious pilgrims and insisting their friends and family call them by their new names—Immanuel David Isaiah and God Adorneth.

Mitchell became a well-known beggar and pest around the downtown area, standing outside the shopping mall across the street from Temple Square, sometimes cursing people if they didn’t give him money, or spreading his arms, portraying Jesus suffering on the cross. In April 2002, he finished his 27-page revelation, called The Book of Immanuel David Isaiah and gave copies to friends and relatives. Church authorities were given a copy and, in early June 2002, the same week he took Elizabeth Smart, Brian David Mitchell was excommunicated.

This may sound like a strange story to people who are not from around here, but everything that happened in Mitchell’s life, at least up to where he kidnapped Elizabeth, is not that unusual within the Mormon community. Most Mormons do not have visitations and revelations, but some still do, and when it happens, there tend to be dramatic consequences.

For example: In 1993, while LDS Apostle Howard Hunter was addressing 15,000 BYU students in their basketball arena, a young man named Cody Judy appeared on stage and stood behind Hunter with a briefcase he said contained a bomb. He gave Hunter a three-page letter describing how God had made him, Cody Judy, the new prophet of the church, and told Hunter to read it or he would blow everybody up. There was no bomb in the briefcase, only a Book of Mormon. Judy was taken to the state mental hospital, where he jumped from his third-story window and escaped into the mountains. For three weeks he traveled “like a deer,” fearing a massive manhunt. Then, suddenly, he showed up at the Church-owned television station and asked for some airtime on the news. Then he spent eight years in prison, and when he got out he worked in a video store and ran for public office. Now, he has a Facebook site.

I had a friend in high school who was a gifted athlete and a charming young man. His family lived down the street from mine, next to the Salt Lake Country Club. Late one summer night, he burst into my bedroom, very frightened. He said he’d been making out with his girlfriend on the ninth green and his guardian angel appeared in a glowing light above a sand trap. The angel told him to take his hand out of his girlfriend’s pants and not to put it back, ever again. At the time, no one mentioned schizophrenia. We all thought it was just part of being a Mormon—even when he attacked his father because he thought he was the devil, even when he would go down to Temple Square and walk up to young women and tell them that God had just told him they were to be married in the Celestial Kingdom. We thought this was strange, but not necessarily out of the ordinary. His family sent him on a mission, thinking it would be good for him, but it only made him crazier. He came back and went into the psych ward at University Hospital, where they put him on heavy medication. He struggled with a marriage and numerous low-paying jobs and volunteered as a live actor in the temple, portraying “Heavenly Father Behind the Veil,” but his health went downhill fast and he died at age 29 due to organ failure from all the medication he was taking.

Then there was the group of polygamists in central Utah who claimed to be receiving “unanimous revelations,” where not one but all 10 men would receive the same revelation at the same time. Angels and apostles and resurrected beings had appeared to them, and they had seen and heard many wonderful things. For instance, they were told they were all new prophets and they should start a new church called “the True and Living Church of Jesus Christ of the Last Days,” which they did. Then God told them that they should become polygamists, which they did. Then, unfortunately, God told only some of them that they should sleep with more than one wife in the bed at a time, which they did, and this caused their quorum of 10 apostles to break apart, as some considered the practice to be an abomination unto the Lord.