The One Mighty and Strong

Prophecy & polygamy: two peas in a pod
When God speaks to a man and tells him he is the new prophet and must now take charge of the only true church, the next thing he often tells the man is to become a polygamist. This is because part of the responsibilities of being the new prophet is to spread “the seed of David” and produce the new chosen people. This takes a lot of women and a lot of effort.

Many in Salt Lake City, Mormon and non-Mormon, are opposed to polygamy, but very few are in favor of prosecuting and punishing the crime. This is because there are a lot of polygamists in these parts and it would be very expensive and socially chaotic to go after them. . Polygamy is a long-established part of the local culture, and, then, we all live in something that resembles a polygamous culture, where affairs and serial monogamy are common. So, who will be the first to throw a stone? And what will become of it? 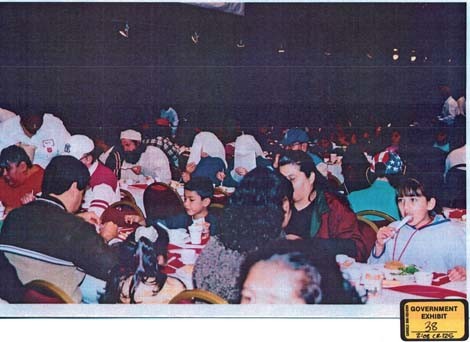 In this way, we tolerate polygamy, apparently even among crazy homeless people dressed as characters out of the New Testament. People who saw Mitchell walking around downtown with Wanda and Elizabeth in tow may have assumed he had taken a young polygamist wife, and nobody questioned him about it, even though the new wife looked very young. All that separated her from us was the veil she wore over her nose and mouth. If she would have taken off the veil, we would have recognized her. We thought she had either been killed or was being held against her will by someone like a monster. No one imagined that she would be walking around with a man who thought he was Jesus Christ.

Although her father now denies it, Elizabeth may have been suffering from Stockholm syndrome, also known as terror or trauma bonding, a phenomenon in which victims display compassion for, and even loyalty to, their captors. It’s common in cases of abused children, battered women, prisoners of war, cult members, incest victims and concentration-camp prisoners. The victim feels intense fear of physical harm. All control is in the hands of the captor. If the captor then shows the victim some kindness, the victim often begins to support and sympathize with the abuser’s reasons and behaviors, even at times helping him and not trying to escape. In the late ’70s, Patty Hearst was kidnapped by the Symbionese Liberation Army, and then helped them rob a bank. Jaycee Lee Dugard was kidnapped in 1991, when she was 11 years old, by Phillip Craig Garrido, with whom she eventually had two daughters. When she was found in 2009, she told the authorities that Garrido was a “great person” who was “good with her kids.”

Stockholm syndrome seems like a good explanation for why Elizabeth didn’t cry out or run away, and perhaps Elizabeth’s father, Ed Smart, now denies this explanation because he is unwilling to accept that Elizabeth ever supported or sympathized with Mitchell, let alone that she believed he was the new prophet. Elizabeth has testified in federal court that she saw Mitchell as “evil, wicked, manipulative, sneaky, slimy, selfish, greedy, not spiritual, not religious and not close to God.” She said Mitchell threatened to kill her and her family if she ran away. But, really, there were many opportunities, in public, where all she had to do was take off the veil … unless she believed Mitchell actually had magical powers. And maybe he did.

In late August, the threesome went to a party thrown by a gang of bohemians just down the hill from Elizabeth’s home. It can get quite hot here in August during the day, but the nights are enjoyable. I imagine Mitchell and Barzee and Elizabeth had been walking around town all day in the heat and were on their way back up to the foothills on a cool evening, and they passed by a house with a party going on, so they crashed it. Mitchell liked to drink beer, and free beer was hard to pass up. The house had a nickname, China Blue, and a reputation for wild parties with people often coming in costume, so the pilgrim robes and polygamy theme didn’t seem that out of place. The host of the party, a man named Bub, told me he was a little perplexed that this guy who was spouting religious doctrine was also pounding down a lot of beer. He said somebody pulled out some homemade absinthe and Mitchell tried to get Elizabeth to drink some, but she refused.

A couple of young women at the party started talking to Elizabeth. The women could only see her eyes, but they thought she looked uncomfortable and asked her if she was OK, if she needed any help, but she wouldn’t talk to them. Mitchell then came up and pulled her by the arm into another room. This upset Bub and his friends, and they confronted Mitchell on his harsh treatment of the young woman. Under attack, Mitchell jumped up on a chair and started hurling fire and brimstone at the guests, invoking scripture and the power of the Lord and damning them all to hell—perhaps in the voice he had perfected while portraying Satan in the temple. He was still yelling as they pushed him out the door. Then, he stood in the front yard and yelled some more before taking his women and going home, back to their camp high in the foothills.

Bub told me he felt kind of dumb when he realized the girl he was trying to protect was Elizabeth Smart, thereby missing the $250,000 reward. He said, “It was very mysterious, the whole scenario, almost like he was using black magic to build a psychic fence around the situation.”

Courtroom serenade
The legal definition of insanity rests upon the question of whether the accused understood the nature and quality of the act he was doing or that he did not know he was doing something wrong. I think we should apply this test to Mitchell on that August night as he stood in the yard on Second South and condemned the partiers at China Blue. Imagine, here is a man who has abducted and raped a young girl, and she has a quarter-million-dollar reward on her head, and he is raving, late at night, condemning people to hell in a front yard less than a mile from her home. Did he understand the nature and quality of this act? I think he thought he was the prophet, acting in God’s name. Did he know it was wrong? I think he thought it was right, if not absolutely necessary. So he was insane, for sure.

But then, what about the time, shortly after the party on Second South, when Mitchell, Barzee, and Elizabeth were confronted by a homicide detective in the library downtown? The detective had been told of a report that Elizabeth Smart was in disguise at the library. He approached the three and asked Elizabeth to take off her veil, but Mitchell stepped in and somehow Jedi mind-tricked the officer into backing off and leaving them alone by telling him Elizabeth was his daughter and it was against their religion for her to show her face or speak in public. The officer said Mitchell stayed calm through 15 minutes of questioning, and so he could find no reason for doubt or suspicion. In this scenario, Mitchell clearly understood the nature and quality of the situation and that what he was doing was wrong, because he was able to lie about it, successfully, to a detective who was looking for him. So he was not insane, for sure.

Mitchell’s trial began in Salt Lake City the first week of November 2010. He was charged with kidnapping and sexual trafficking of a minor across state lines, but not rape (perhaps because the punishment for aggravated kidnapping—physical harm or death—is life imprisonment). As he had done in the past, during preliminary hearings in both state and federal courts, Mitchell entered the courtroom singing a Mormon hymn. With its pews for the spectators, elaborate wood paneling on the walls, carpet, chandeliers, and an elevated altar-like bench for the judge, the courtroom seemed very much like a church. The Smart family, including Elizabeth, sat on the front row, while journalists from around the country filled in the pews behind. We sat there, in stone cold silence, and listened to Mitchell sing, eyes closed, waiting for the judge and the jury. I hate to say this, but he had a sweet voice, even with some soul. Elizabeth’s face was blank, her body stiff. Everybody was frozen in their spines, even those who had not grown up singing these songs in church. Mitchell was trying to control the room, and he was doing a pretty job. He was a sort of evil magician.

The judge came in, the jury came in, and Mitchell kept singing, so the judge ordered that he be taken out and put in a room where he could watch the trial on a television. In their opening arguments, the prosecution and the defense told the jury that the facts in the case were not in question; both sides agreed Mitchell had taken Elizabeth at knifepoint and held her captive and raped her many times. The only question for the jury to decide would be whether Mitchell was insane at the time he committed these crimes. In other words, did Mitchell really believe he was the prophet?

It’s a difficult question to answer, made more complex by the strong possibility that a Mormon and a non-Mormon juror might come up with different answers for the same set of facts. For example, Joseph Smith believed he was the prophet and took many wives, two of whom were 14 years old when he “married” them. Mormons do not consider him to have been insane, but non-Mormons may differ. And what of those who follow in Joseph Smith’s footsteps even today, receiving prophecies and marrying girls into polygamy—do they really believe they are talking to God, or are they using religion to get laid?

In the end, if there is an end, I believe the jury will not be able to decide the question of sanity, but it won’t matter because they’ll choose the verdict with the harshest punishment—guilty- sending Mitchell to spend the rest of his life in the state penitentiary with the other kidnappers, rapists, and killers. Let him sing for them.

Scott Carrier is a professor in the communication department at Utah Valley University. This story originally was broadcast as part of This American Life on NPR. This is the unabridged story; a condensed version was printed in City Weekly on Dec. 2, 2010.