A chance to reconsider Episode 1 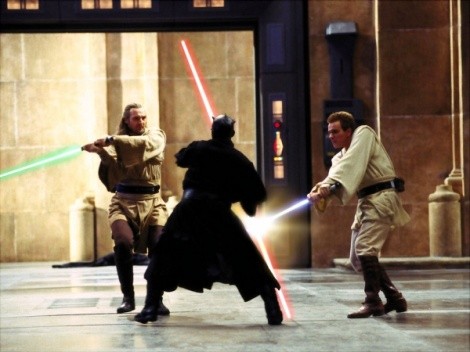 At its absolute best, Star Wars is a fascinating mythological fable that entertains. At its absolute worst, it’s the subject of divisive arguments about how it should, or shouldn’t, be enjoyed, whether that’s referring to version, era or individual film.

For me, I’ve spent my life using Star Wars as a cure-all tonic for anything that ails me. My most vivid memory of getting through the worst feelings of my childhood—from sickness, abuse and whatever else—was through the fantastic escapism offered by the heroic journeys presented in the Star Wars films. I’ve never thought of Star Wars as anything but a fantastic story and a healing balm.

When The Phantom Menace originally came out in 1999, I was 18 years old and studying the art of film and story. For me, all of those warm, fuzzy feelings of youth were on display in a brand-new film. I left the theater flabbergasted that there was any negative reaction.

The Phantom Menace presented the Republic as it was in the days before the Empire, where the biggest problem they had was a simple trade dispute. The Jedi were ubiquitous protectors, kicking ass and taking names, represented in the film by Qui-Gon Jinn and Obi-Wan Kenobi. Sure, Jar Jar was a little obnoxious, but there was a lesson to be learned there in classic mythological fashion: Be nice to even the most annoying of creatures, because as useless or ugly as they may seem, their help might be needed. More than anything, though, we saw the machinations of Senator Palpatine, the phantom menace himself, begin his long, slow course leading to the ultimate destruction of the Jedi.

And who could forget Darth Maul? Or the podrace?

For a very vocal minority of fans, The Phantom Menace was their worst nightmare. There’s no argument that George Lucas’ skills as a filmmaker and storyteller were rusty, but a lot of these disgruntled fans felt betrayed by what Episode I wasn’t. They wanted the prequels to start with the destruction of the Jedi, and grow ever bleaker into more and more adult territory. Phantom Menace isn’t that. It’s the most different in the Star Wars saga in that it is, for the most part, a kids movie.

And there’s nothing wrong with that in my book. It doesn’t matter which Star Wars movie I’m watching; I’m a kid while I’m doing it, be it Phantom Menace or The Empire Strikes Back.

When The Phantom Menace comes out in 3-D on Feb. 10, I’m going to embrace that spirit as I always do, and derive as much enjoyment from it as I can. I love Star Wars. I love the stories it tells, I love the characters, I love the effects (CGI and practical effects alike), I love the tragedy of Anakin Skywalker and I love his eventual redemption at the hands of his son. Everything about the series—from the first opening crawl in The Phantom Menace to the final iris out in Return of the Jedi—works for me.

Do I have some nitpicky problems with aspects of the tweaking that’s been done in recent years? Sure. Are there things that I wish would have been done differently in the prequels? Of course. But does that detract from my overall enjoyment? Absolutely not.

I don’t want to argue with people who don’t like it, and I get incredibly annoyed with those who can’t seem to accept that an intelligent human being can like it. Join me, and together we can end this destructive conflict and bring unity to Star Wars fandom.

For those of you who do wish to join me, I’ll be helping host a premiere event at the Megaplex Jordan Commons (9400 S. State, 801-304-4577) for the midnight screening Thursday, Feb. 9, starting at 10 p.m. The 501st Legion and Mandalorian Mercs will be there taking pictures with fans in costume. The fellas from Big Movie Mouth-Off will be hosting a costume contest, and then I’ll be hosting a Star Wars trivia contest, leading right up to the start of the movie. Tickets are on sale now at MegaplexTheatres.com.