The Pirates! Band of Misfits

High-quality animation with a British twist 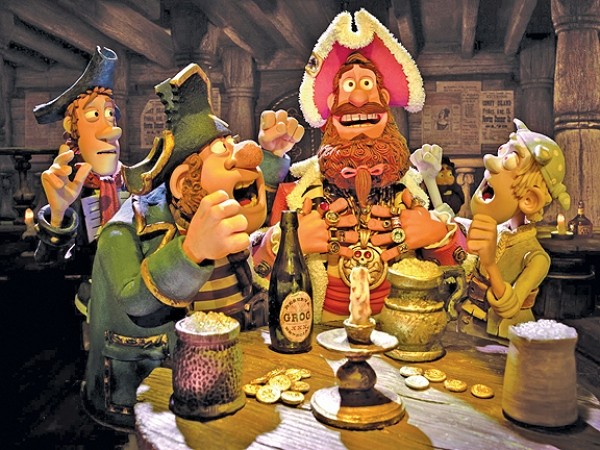 America’s movie buffs have had a love affair with Aardman Animations—creators of The Pirates! Band of Misfits—for years. The American general public, on the other hand … well, not so much.


Those who fell for the charming Wallace & Gromit shorts by Nick Park in the late ’80s and early ’90s knew that the little British studio that made its name in stop-motion Plasticine wasn’t just some esoteric outfit; the wit and cinematic sensibility of these adventures could certainly translate into mainstream success. Yet over the past dozen years, as feature animation became one of the surest bets in a theatrical landscape where there were never sure bets, Aardman’s efforts lagged behind at the box office. In 2005, Wallace & Gromit in The Curse of the Were-Rabbit grossed only $56 million in a year where the first Madagascar landed $193 million, and even the forgettable Disney Chicken Little hit $135 million. Similar disappointing results met 2006’s computer-animated Flushed Away ($64 million) and 2011’s Arthur Christmas ($46.4 million). Even the most successful Aardman feature—2000’s Chicken Run, with $106.8 million—couldn’t reach the $137.7 million of the Disney CGI flick Dinosaur, which I dare anyone to remember a moment of now if they can.


So why does it seem that Aardman has to fight such an uphill battle to get folks out to see clever, rollicking tales like The Pirates? There’s nothing off-putting about the premise, which finds a generically named Pirate Captain (Hugh Grant) in 1837 trying to win the “Pirate of the Year” award that has long eluded him. Unfortunately, he and his crew are generally better at blundering than plundering, to the point that they believe their assault on a scientific vessel called the Beagle is simply their latest failure. But the Beagle’s soon-to-be-famous passenger Charles Darwin (David Tennant) realizes that the Pirate Captain’s “parrot” is, in fact, something else—something that could mean scientific fame, or perhaps treasure from Queen Victoria (Imelda Staunton) that would give the Pirate Captain an edge in the all-important “booty” category.


Director Peter Lord has as sure a hand with action set pieces as any live-action director working, providing the kind of exuberant entertainment that appeals across ages. One chase finds the pirates one by one becoming unwilling passengers in a runaway bathtub hurtling down a stairway; later, the combination of a sinking ship and a dirigible creates a wonderfully perilous finale. Lord understands precisely how to pace an adventure in a way that keeps energy and interest high, even for kids who don’t get every joke.


And the jokes are plentiful and wonderful, sneaky-smart in their execution right from the outset, like the “London 1837” caption that appears shortly before the guy who held it up sheepishly tries to stay out of frame. Screenwriter Gideon Defoe—adapting his own book—crafts detailed bits of subculture, from the pirates’ favored Blood Island hangout to the nerdy denizens of the Royal Society of Science (Motto: “Playing God since ...”). Lord and Defoe also wring plenty of punch lines out of Darwin’s chimpanzee companion, Bobo, with his communication by pre-printed cards, as well as the almost innocent devotion of the Pirate Captain’s crew to their leader and his providing a regular “Ham Night.” The meta-textual gags—like tossing red spots into the water to mark the trail of the ship across the map—do occasionally threaten to steer The Pirates! into the realm of the most frustrating DreamWorks films, but the film never opts to live in that hipper-than-thou place.


What, then, is holding back a film like The Pirates! from the kind of success it deserves? The quirky character design that’s just slightly too grotesque to be cute? The use of an eclectic song soundtrack that ranges from vintage English Beat to Flight of the Conchords’ “I’m Not Crying (It’s Just Raining on My Face)”? A comedic sensibility that’s just British-dry enough to feel different from the content in American-made animated features? As a story, The Pirates! may not reach the emotional heights of Pixar’s best—but then again, how many films of any kind do?


Family-movie audiences claim they want quality. So here it is. The movie nerds among us will be more than happy to have some company.

THE PIRATES! BAND OF MISFITS