In crust we trust

We've all seen them, even broken crusts with them. The burnouts, huddled around a foggy window watching for the glowing Big Daddy's triangle atop a Geo Metro to illuminate their street. The Relief Society patrons, stacking boxes of cheese and pepperoni next to towers of red Solo cups, soon to be filled with K brand root beer and Diet Coke while the kids bow their heads, pick their noses and snicker during the blessing of the pie. The sad daddy, his teenage daughter glued to her phone screen, close enough to the door that if the pock-marked cashier behind the counter recognizes her, she can take a fake phone call. His son navigating the waters of sad-parent manipulation, telling his dad, "Mom lets me have Mountain Dew this late." And, of course, the snob, imparting pizza wisdom on the world beneath her because she hasn't yet found the perfect slice to transcend her from this heap of mostly bad wine and poor people. Yes, Utah is a unique place in many regards, and its pizza eaters are no different. In honor of this week's Pizza Issue, let's take a look at the four corners of archetypal Utah pizza eaters.

The Sad Daddy
Slice of Choice: Hawaiian with extra soda and bread sticks
Utah's divorce rate is slightly higher than the national average, according to U.S. Census data, and no one has cleaned up on the messy business of separation like Papa John. The Sad Daddy takes his children to the local pizzeria rather than having his pie delivered; glad for any reason to get the kids out of his dim two-bedroom apartment littered with lite-beer cans, forwarded mail and Stouffer's frozen-dinner boxes. The Sad Daddy is a connoisseur of convenience, quick to indulge his kids' desires for greasy foods and sugary snacks. He places his order and tells the young ones to make a selection—something their mother wouldn't approve of—from Redbox. The Sad Daddy's slice of choice is a classic Hawaiian ham and pineapple, a sweet and savory pairing served over rich warm red sauce and a salty crust. Served with extra breadsticks and name-brand soda, the Sad Daddy's slice of choice is perfect for stoking the memory of Mom while simultaneously spiting her.

The Stoner
Slice of Choice: Half sausage, mushroom, green bell pepper and bacon; half pepperoni, artichoke, pineapple with extra cheese.
This archetype makes up for roughly 100 percent of Big Daddy's clientele. The bleary-eyed stoner makes his 3 a.m. pizza order between bong rips and assertions about the origins of Siddhartha and George Harrison, pays with crumpled bills of assorted denomination collected from the group and tips with a loaded bowl. The Stoner has deep roots in the Beehive State. Those kids spotted on the curb outside Little Caesars with the greasy box on their laps, tearing slices of thin cardboard pizza between them—that is the embryonic stage of the Stoner. Years of social ineptitude, ambient religious impression and Black Sabbath are the exigencies from which this archetype is born. The Stoner's slice of choice is a collaboration of hazed minds and truculent appetites; a hodge-podge of toppings and flavors to satisfy each region of the tongue while simultaneously maximizing the four-toppings before being bumped into higher price bracket. Yes, the Stoner has a bloodshot eye for detail. 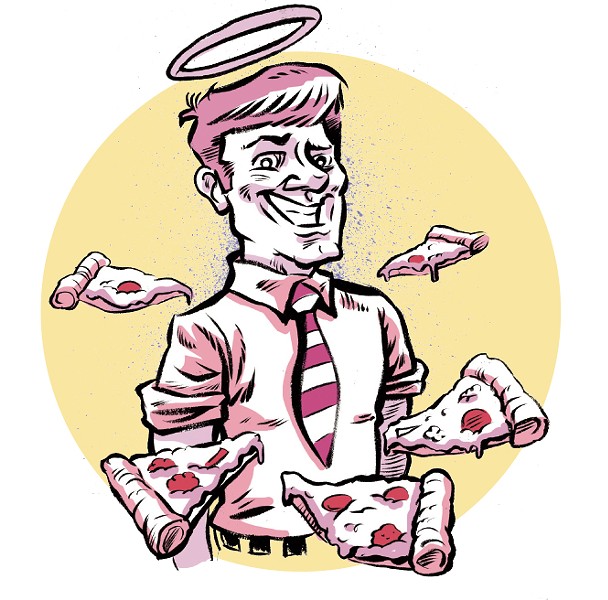 The Slice Snob
Slice of Choice: Thin-crust Gorgonzola with caramelized onion, roasted small-batch tomatoes and fresh basil essence
The Slice Snob is the inharmonious counterbalance to the Stoner and the Sad Daddy, pretentiously pushing back with her high-brow pizza palate just enough to keep the pizza world from flying off its axis. The Slice Snob eats exclusively at local pizzerias that serve locally produced, non-GMO foods. She enjoys a thin, brittle crust licked by the flames of burning almond wood, lightly smeared with plump, San Marzano tomatoes under a layer of venous Gorgonzola and delicately topped with fresh basil leaves and caramel-brown onion. She pairs her slice with a glass of Grenache, tips lightly and complains about the service to her perfectly bearded and sweatered partner as she opens the door to her double-parked Mercedes. The next day, the Slice Snob shares her pizza tasting exploit with colleagues, simultaneously imparting pizza dogma and condescension.