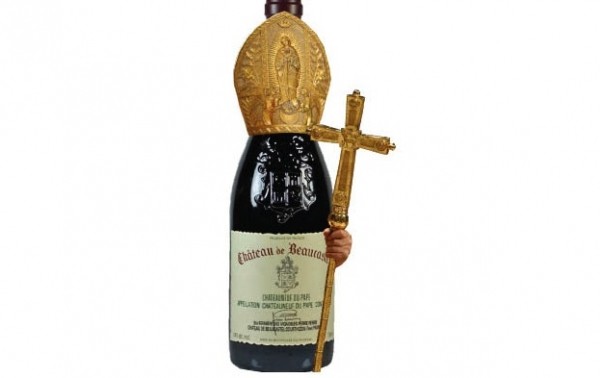 I’ve heard people say, “I’m not religious, but I am spiritual.” Well, that describes my relationship with ChÃ¢teauneuf-du-Pape. I’m not an especially religious person, but I’m positively evangelical about singing the praises of ChÃ¢teauneuf-du-Pape, the pope’s wine. It’s my favorite.

ChÃ¢teauneuf-du-Pape is both a wine and a place. It’s a wine region in France’s southern RhÃ´ne, which is also home to two other wine regions: Gigondas and Vacqueyras. Southern vineyards also produce most of France’s CÃ´tes du RhÃ´ne. It’s a beautiful place in Provence, with a sunny Mediterranean climate, where olive trees abound and lavender scents everything. Although, if you’ve ever been there, you’ve probably experienced le mistral, the cold wind that blows down from the Alps and rips through the RhÃ´ne river valley. This is actually a good thing for wine grapes, since le mistral cools the vines down. Those cool temperatures help the grapes maintain acidity.

But about the Pope. ChÃ¢teauneuf-du-Pape translates as “new castle (or chÃ¢teau) of the pope,” dating back to the 14th century, when the pope resided in the walled city of Avignon, just south of what are now the ChÃ¢teauneuf-du-Pape vineyards. It was the French Pope Clement V who, in 1308, relocated the papacy from Rome to southern France. Well, fast-forward a few centuries, and today, ChÃ¢teauneuf-du-Pape is one of the world’s most sought-after wines. Unfortunately, it’s also one of the more expensive ones.

There are 13 grape varieties permitted in making ChÃ¢teauneuf-du-Pape, but by far the most popular one—accounting for about 80 percent of the grapes planted in the southern RhÃ´ne—is Grenache. In red ChÃ¢teauneuf-du-Pape, you’ll usually also find Syrah, MourvÃ¨dre, Cinsault, Muscardin and a few others. The vineyards are farmed organically or biodynamically; the climate of the area precludes the need for pesticides and herbicides. And, while you might expect a flimsy little summer-cottage-type wine to come from this Mediterranean environment, ChÃ¢teauneuf-du-Pape is anything but. These are dense, rich, intense wines with gravitas. The best ones are powerful enough to evolve for 15 to 25 years. I have a bottle from the 1989 vintage that I’ve yet to open.

An entry-level ChÃ¢teauneuf-du-Pape from a producer like ChÃ¢teau La Nerthe will run you about $42, and there’s a lot of good ChÃ¢teauneuf-du-Pape in the $50 to $70 range. However, if you want to bring in the bigger guns—say, ChÃ¢teau de Beaucastel, Le Clos du Caillou or ChÃ¢teau Rayas—plan on spending over $100. I recently spotted a bottle of 2009 ChÃ¢teau de Beaucastel Hommage Ã  Jacques Perrin going for $1,000. But, hey, it’s still cheaper than great Burgundy!