From underdog to goliath and back again, the Real Salt Lake brotherhood is still fighting for the perfect game 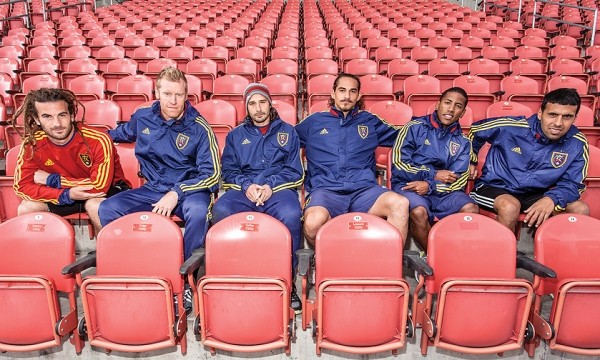 At halftime of the last game of the 2013 Major League Soccer season, a furious Jason Kreis stormed into his team’s locker room. Perched, as always, on the right edge of the team’s bench, Real Salt Lake’s head coach had just endured a lackluster performance by Real against Chivas U.S.A., a team languishing at the bottom of the league.

Kreis wanted his team to be bold, to be risk takers, yet here they were, “another 45 minutes where we were just out there, expecting something to fall for us.” The usually taciturn Kreis, a former star player turned coach, gave his team “the hairdryer treatment,” a soccer euphemism for a coach shouting so close to players’ faces they can feel the heat of his breath on their skin.

His emotional explosion, Kreis says, reflected “my frustration with watching a group of men and knowing what they’re capable of at all moments and seeing them in a stretch where they won’t do that. For me it’s not about can or can’t; it’s about will or won’t. When I see that too often, to me it seems dishonest.”

Real’s captain, Kyle Beckerman, says the tirade had a clear message: “He just wanted us to step it up.” The second half, which also heralded the appearance of midfielder Javier Morales, saw just that, at least for the first 20 minutes. “I think Javier coming on was huge,” Beckerman says. “He was buzzing to get out there.” Real put away two goals in quick succession, the first a penalty by striker and lead goal scorer Alvaro Saborio, the second by the 21-year-old rookie Ecuadorian import Joao Plata.

While Chivas scored shortly after, Real ended the night, and the season, with a 2-1 victory.

For a league-record sixth consecutive time, Real entered the playoffs for the Major League Soccer cup, drawing archrival L.A. Galaxy in the first leg at the beginning of November. Thrust into the bright lights of the Western Conference semifinals, Real’s achievements during the 2013 season all but sank into the shadows.

What began as what Kreis calls “a rebuilding year”—although the rebuilding was not acknowledged publicly—evolved into one of unexpected success, bitter disappointment and uncertainty. The latter will only be resolved at the end of the year, when Kreis decides to stay or leave the team he’s led as coach since 2007.

The rebuilding began in late November 2012, when three high-profile members of “the core”—the first 11 who had started for Real the previous four years—were traded to make space under the league-imposed salary cap for an array of young forward talent, including Olmes Garcia, Joao Plata and Devon Sandoval, along with returning RSL veteran Robbie Findley. But changes on the field were obscured by a more dramatic change off the field, when, in January 2013, Real’s founder—New York-based sports-business entrepreneur Dave Checketts—sold Real to majority investor Dell Loy Hansen, a local developer and property owner.

Hansen, a self-confessed soccer novice, has brought a very different approach to ownership, more akin to Larry Miller’s passion than Checketts’ laid-back style. “With the players, I’m a father figure,” says the Cache Valley-born entrepreneur. “I know every one of them. After the match, I hug every player before he gets to the locker room. ‘I’m sweaty,’ they say. ‘I don’t care, I just want to feel it.’ ”

After all, he says, as “an owner, what do you want? Do you want to have a distant look at them? I’d rather intimately know them.”

In a March 2013 interview with The Salt Lake Tribune’s Aaron Falk, Hansen pulled back the curtain on Real’s problematic financial history and his efforts to address it. Since before taking full ownership, Hansen has used his extensive Utah business connections to help secure sponsorship deals. Most recently, Real secured a 10-year shirt-sponsorship contract with LifeVantage for close to $30 million in October 2013. In addition, Rio Tinto extended its naming contract with the stadium to 2020.

Add all that up, Hansen says, plus ticket sales, concerts, food and income from Hansen’s related businesses, and Real will be closing in on the top three soccer teams, in terms of revenue, in the country—L.A Galaxy, New York Red Bulls and Seattle Sounders. These are the teams, Real staff note, that outspend Real 5 to 1.

Along with financial savior, Hansen sees his role as “a civic duty. I didn’t buy this thinking I’d get a dividend.” Rather, he says, “It’s like being elected mayor without having to run for the job. I’m mayor of Real. But if you think ownership brings with it some dictatorial style, you’re sadly mistaken.”

Concerns about Hansen’s impact on the team’s management surfaced in September, when a national sports blogger revealed that Kreis had been talking to the owners of British super-club Manchester City about being coach of a new franchise for New York City, and a Tribune columnist claimed Hansen had all but driven Kreis into the arms of the prospective NYC team.

In these last weeks—or days, if victory over L.A. Galaxy proves elusive as City Weekly hits the streets—of Real’s year, Kreis is also struggling with a lesson brutally taught by the “deep, deep disappointment” of having D.C. United, a team Real viewed as inferior, snatch the Open Cup from Real on its home field in the late October 2013 final. Typically convincing as an underdog, Real too often can stumble in crucial games when it is the favorite at home, as the Open Cup debacle underscored.

Nevertheless, Kreis says after a rain-swept practice, that Real reached “second place in [the Western] Conference and third or fourth overall in the entire league, is truly remarkable. So whatever you want to say about the relationships, or the difficulties of having a new owner, it all worked in the end.”

Perhaps Real’s greatest achievement in 2013 belongs to General Manager Garth Lagerwey and Kreis and his coaching staff. They built a team over just a few months with a new depth in its attack and an emotional bond that surprises even the coach himself. He’s never known a team so close, he says, except for his own high school team, when “literally I felt I would do anything for anybody on that team.”

Among the host of new young players, Medellin, Colombia-born Sebastian Velasquez has proven to be one of the most exciting additions. He says that Real, like any family, “has its ups and downs,” but what helps them stick together is their respect for one another. “The first thing Jason tell us is to have respect for one another, to fight for the person next to you,” Velasquez says. “When you have 28 guys deep who all fight for each other, respect each other, a lot of great things happen.”

FIRE AND TEARS
In the waning weeks of the 2012 season, as Real failed to score in its last five games, one thing was apparent—the team needed a new attack.

“The pain of the end of the year was we lost the way to find the net,” Hansen says. “On paper, we had a very good set of forwards, but the connection wasn’t happening.” Ultimately, the decision came down to winning cups. “The reason we broke up the team was we didn’t win titles,” Lagerwey says.

Kreis operated on “zero sleep” in November 2012, sitting through emotionally trying meetings about whom they would trade. He knew that he would have to trade players who had given him blood, sweat and tears for years. And in fact, he says, he had wanted to do the trades the year before, in 2011, but couldn’t get internal support. “I feel now, with hindsight, you can only be together as a group for so long. The messages, the buy-in, begins to become a little stale.”

Yet, as the end of the 2012 season loomed, and with it the whittling down of “the core,” so grew Kreis’ angst over the choices he would have to make.

The first to go was Argentine forward Fabian Espindola, who had gone from streaks of goal-scoring to droughts, most notably the last games of the 2012 season. Kreis was concerned the fiery Argentine and new first-time father, who had bought a house in Utah, would be angry when told he had to leave. Espindola, Kreis recalls, was thankful for his time with the club. “I had cried a lot” over trading the players, Kreis says. “I think he saw that in my eyes.”

Manning walked Hansen through the reasons why they were trading Olave, “my best friend on the team,” Hansen says. He subsequently had Olave and his wife and child to stay during Christmas 2012 and says he still revisits with management the wisdom of trading Olave.

“Those decisions were really tough,” Lagerwey says. “Those guys were part of the foundation of who we were, our character; they’ve been through the wars with us. It was really tough to let those guys go.”

The veterans were also skeptical. “We were trading not just good players but their friends,” Lagerwey says. “It had been a very good locker room for a long period of time.”

Seeing the All-Stars go, veteran defender Chris Wingert says, was vexing. “You see these teams spending millions and millions on a single player and we can’t keep a few guys who are a huge part of the group because they make a couple of hundred thousand. It’s hugely frustrating.”

Kreis himself was deeply worried during the preseason. “We had so many new guys, players from other teams with only a year or two experience.” Many of them had a “really hard time understanding what we wanted to do,” the principal challenge being to adapt to the midfield diamond formation upon which Kreis had built his team.

Meanwhile, Kreis’ contract was ending in December 2013. His three prior contract extensions had all been decided before the end of January, and he expected that 2013 would be no different. “My feeling was that the contract needed to be handled between January 15 and March 1, and it wasn’t,” Kreis says.

The reason, Kreis says, was circumstance, namely Checketts’ replacement by Hansen as owner. “I think almost all of the fault, or the blame, only lies in the fact that there was a change in ownership,” Kreis says.

Hansen made an offer in March, but it was too late. Kreis insisted on no distractions from coaching. “Jason has one character trait,” Hansen says. “He’s singularly focused. Give him two items to focus on, and you can make him vibrate.”