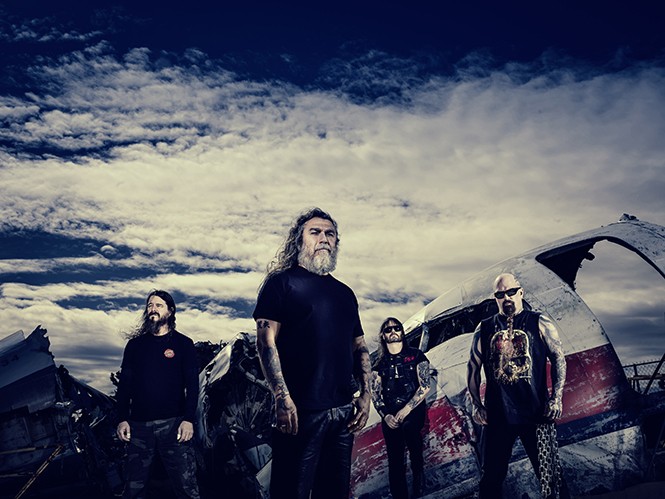 "No one goes, 'Yeah, I was really big into Slayer one summer,'" Rob Zombie said in the 2004 documentary Metal: A Head Bangers Journey. "I've never met that guy. I've only met the guy who's got Slayer carved across his chest." For nearly 40 years, Slayer has been a household name in heavy metal. But there's more to The Big Four—bassist Tom Araya, guitarists Kerry King and Jeff Hanneman and original drummer Dave Lombardo—than just their music.

Hailing from Huntington Park, Calif., Slayer started when 20-year-old respiratory therapist Araya and three teenage friends wanted to infuse their love of Venom and Mercyful Fate with the speediness of punk rock. "Your first [album], you emulate your heroes," King said in a 2017 interview with Noisey. "Your second one, you gotta start to find your direction."

Slayer didn't really become Slayer, however, until after their infamous third record, 1986's Reign in Blood, one of the first non-rap records released on Rick Rubin and Russell Simmons' new Def Jam label. With shorter, faster songs and clearer production, songs like "Raining Blood" gave birth to early thrash, while also including details of brutal Satanic rituals ("Altar of Sacrifice"), as well as a notorious track about the Holocaust ("Angel of Death") inspired by the real Angel of Death, Nazi physician Josef Mengele. More than 30 years later, it still gives any self-respecting metalhead goosebumps.

However, all good things must come to an end—after losing founding member Hanneman to liver failure in 2013, Slayer's reign finally culminates with their suitably named End of Days farewell tour. What else do you say about these legendary American thrash gods? There's a freakin' statue of Araya in a Ukrainian zoo, for Satan's sake. The band has released everything from Slayer comic books to Slayer Christmas sweaters to Slayer bicycles and, yes, countless Slayer tattoos. Like Zombie said, Slayer fans are serious, and they take everything one step further by getting their love for the band inked right into their skin. Browse the internet, and you'll find countless web forums full of massive back and arm pieces dedicated to the band.

Frankly, it would be insulting to try and encapsulate three-plus decades of aggression, blood, sweat and pentagrams into one story. But Slayer has made a massive impact on my life, too: I've got the cover art from their 2006 album Christ Illusion tattooed on my arm. Yes, it's a tattoo my mom says could lead me to become possessed by the devil, but hey—I really liked that album. That tattoo came in my pre-Iraq deployment days, too, so I have no shame. Maybe Slayer fans are possessed; the band certainly has a strong cult-like following to back up such a claim.

Has any other band pissed off more parents and Christian groups? After the release of Reign in Blood, mainstream media took the song "Angel of Death" and the band's highly visible use of WWII memorabilia as proof that Slayer were Nazi sympathizers. Further controversies followed: Parents Music Resource Center (PMRC) has had a hard-on for Slayer since the 1995 murder of Elyse Pahler by three teenagers who played in a Slayer-like band called Hatred. In 2014, when Leroy Smith III murdered his father Leroy Smith Jr., he blamed Slayer directly, claiming the band was present when a gun was held to his head and satanic thoughts were placed into his mind. Then there's the scores of fans who self-mutilate the word "Slayer" into their bodies, or the haunting fact that the band's ninth studio album, God Hates Us All, hit the shelves bright and early the tragic morning of Sept. 11, 2001.

Although the killers in the Pahler case later claimed Slayer had nothing to do with their plot—in 2001, a judge ruled that Slayer's lyrics were offensive but didn't incite murder—and the band clearly couldn't have predicted the tragedy that struck the U.S. on 9/11, the cards remained stacked against them. Despite (or maybe because of) all that anger and blame, metalheads still flock en masse to Slayer concerts. It's even become a family affair in America, with parents bringing their kids to shows and passing on Slayer records as a treasured inheritance. Perhaps it's because Slayer empowered those who were deemed "different" or "weird" to start standing up for each other. Yes, you might get kicked or elbowed in the pit, but if you fall down, you'll get picked up. It might sound corny, but it's also a metaphor for Slayer's meaning.

Today, Araya, King, Gary Holt (Hanneman's replacement) and current drummer Paul Bostaph are long-haired fathers—and even grandfathers—who are finally ready for thrash retirement. This might mark our last chance to receive a bloody nose in the pit or have a whiplash-induced hangover from adrenaline-fueled headbanging to "Altar of Sacrifice" and "World Painted Blood." But there's always hope that the band will come out of retirement like Ozzy Osbourne did with Black Sabbath for another "final" world tour. Until then, the metal gods will keep smiling on Slayer and its long history of extreme music.