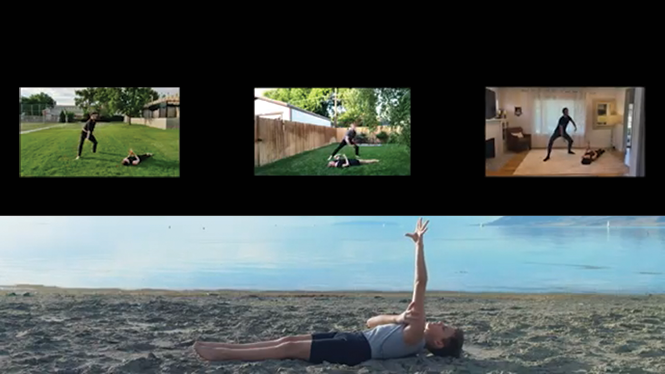 Stravinsky's Rite of Spring carries with it a kind of mythology, built around the often-contradictory accounts of what transpired at its 1913 Paris premiere. What is clear is that it was a daring, revolutionary work that inspired audiences to reconsider their preconceptions about the art form they were watching—which makes it perhaps the ideal work for re-imagining in the time of a pandemic.

Speaking by phone, Fonte admits that he has been resistant to some of the alternate forms that performing arts have had to take to present work to audiences during the pandemic. "I've been holding out, thinking, 'This can't be the new future,'" Fonte says. "I've been a little reluctant to adapt and kind of change."

Once Fonte decided to participate, he and Sklute faced a variety of challenges surrounding the way in which they would be required to prepare and rehearse the piece. One such challenge involved deciding which dancers would participate in this project—specifically, whether it would have to be only those who knew the work already from being part of the 2016 production. "At one time, [Sklute and I] talked about including anyone who wants to be involved, the entire company," Fonte says. "The section that was chosen, a lot of it is just phrases of movement, but a lot of it is partnering. There are enough couples in the company that work together, where even if they didn't work on the [2016] program, they could work together in their living room or their backyard. Adam and I decided not to involve those people, just for expediency and the accuracy of the work."

The dancers themselves then decided on the locations in which they would film—some at home, some in public outdoor locations—and worked most closely with Peterson on helpful details for how best to record their performances. "She gave very clear instructions," Fonte says. "Don't shoot at noon, because the light is not good; don't wear colorful prints."

What remained for Fonte, then, was working on the choreography itself—though Fonte is quick to credit Ballet West ballet masters Bruce Caldwell and Pamela Robinson Harris for their contribution to the project. "They got together and reviewed everything with the dancers before I got on the scene, teaching the existing work from a basic standpoint," Fonte says. "What I can do best is give the piece its spirit, its life. I remember counts, but more than that, I remember musicality. I strategized that Bruce and Pam would teach it for memory's sake. Then I had a lot of fun coaching it."

Fonte acknowledges that understanding the format in which this Rite of Spring would be seen—on a computer screen as small images, rather than on a stage—required rethinking some of the instruction he gave to his dancers. For example, he realized that the upper body movement would be more visible than the feet—especially with some of the dancers standing in grass—which led him to specify "overdoing and exaggerating the arm movements, torso movements and facial expressions." He also had to realize that some of the spirit of the work would be left to Peterson to recreate through her editing choices, since the entire group of dancers couldn't be moving together. "The way she played with timing, the way windows would appear and disappear, move around the screen, did capture some of the original dynamic."

As much as Fonte sees some of these artistic qualities in the video work, he says, "I don't know if I could get used to it." At the same time, he's willing to note that the unique limitations of rehearsing remotely caused him to improve at least one skill set.

"On a personal level, one of the silver linings is, to rehearse remotely, you have to really develop skills to be really clear, so it's kind of improved my language skills a bit," Fonte says. "I had to make sure I'm super, super clear in what I'm after. ... I rehearse in a way that I'm very clear when I'm doing stuff. I could see through the video that they were coming alive through my direction, and my focus and my intention. Dancers really respond to clarity of direction. It's what they need: 'More more more, give us more.' And that in turn gives me more energy."