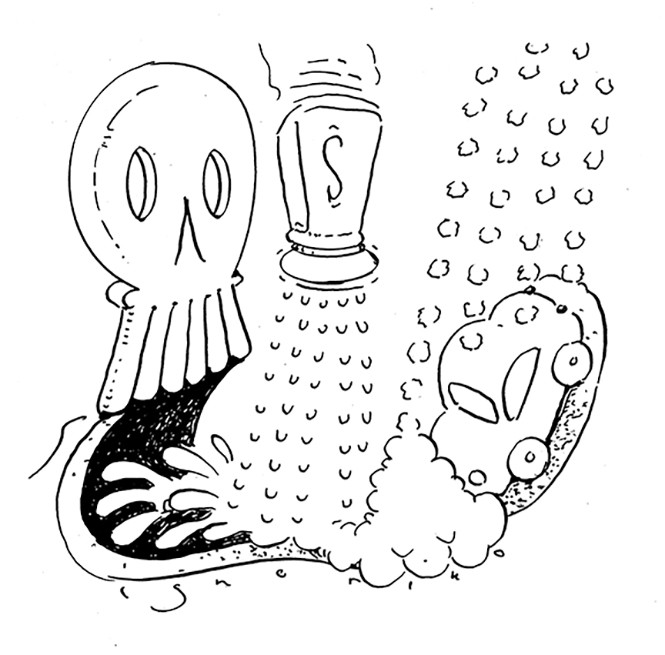 As I sat in my office on a balmy 20-degree day in Pittsburgh, a thought came across my mind: Pennsylvania uses salt to combat snow and ice. What are the ramifications to the environment? Will the Three Rivers become a saltwater haven for sharks? I humbly await your answer as I chain myself nekkid to a tree to protest its slow death from saltwater ingestion.
—Mark

Sharks in the Monongahela might still be a few centuries off, Mark, but your readiness to go full Lorax on the road-salt issue is commendable. I'll be happy to supply you with a few shorter-term problems to worry over, with fewer teeth but frankly just as dire.

First, the scope of the situation. According to the U.S. Geological Survey, ice control accounted for 43 percent of all salt consumption in 2015, by far the biggest slice of the national salt-use pie. That breaks down to about 25 million tons we're shaking out onto our roads per annum. Where's it all go from there?

Well, the first stop is roadside soil and vegetation. You're not wrong to be worried about the trees: salt spray injures evergreen needles and deciduous buds alike, turning them brown and thus decreasing their photosynthesis capacity. Salt in the soil winds up in tree roots as well, where it essentially fills them up, leaving less room for other nutrients like potassium and calcium.

Or say the roadside plant in question is milkweed, its leaves plump with sodium, which subsequently gets ingested by monarch butterflies. Research from 2014 found that consuming saltier plant matter increased muscle protein activity in male butterflies and eye size in females. These effects may be beneficial to a point, but road salt seems to be a high-value treat for animals who don't otherwise encounter lots of sodium, and if butterflies get too much it can kill them.

Birds are also subject to salt poisoning, but they're at more immediate risk too: to get at that delicious salt they alight on the road, aka where all the cars are. (A fatal attraction for finches, in the words of one 2005 report.) Outcomes can be similarly grisly for deer and moose, who see de-iced roads as an all-you-can-eat salt lick.

Roadways being designed to repel water and drain it off, salt readily makes its way into the local streamflow, which is where the most serious trouble begins. A paper published last year in the Proceedings of the National Academy of Sciences explored the effects of road salt on 371 North American lakes, noting that we're looking at a double-barreled problem: the continued use of salt for de-icing, plus sprawl—we just keep producing more roads. Having a mere 1 percent of the nearby ground asphalted over, the study found, is enough to gradually bump up a lake's salt content, putting it in danger of long-term salinization.

As you might imagine, excess salt in lakes and rivers disagrees with the constitutions of the various fauna living there. Great enough concentrations of NaCl have been shown to shrink the body size of rainbow trout and mess with the male-female ratios of wood-frog tadpoles. Sodium chloride was the focus in this analysis, but magnesium chloride and other salts are used on roads too; each has its own environmental effects, none particularly salutary.

The PNAS paper predicts that if the current road-to-watershed pipeline persists unabated, "many lakes will exceed the aquatic life threshold criterion for chronic chloride exposure" within 50 years, which is to say we'll get a grim cycle of declining biodiversity, disrupted food chains, and overall ecosystem malfunction; in the most serious cases, too much salt chokes off oxygen levels in freshwater bodies. This isn't just some abstract problem of the natural world, either—these are our fisheries we're talking about.

And then sometimes humans have their own road-salt troubles. You're aware of the situation in Flint, Mich.: the city switched its municipal water source from Lake Huron to the Flint River, whose already-polluted H2O corroded lead-lined water mains, leading to widespread illness, lower fertility, and at least a dozen deaths—a shameful and utterly avoidable tragedy whose prolonged nature has had nothing at all, I'm sure, to do with the demographic makeup of those affected. Anyway, the problem with Flint River water was multifaceted; this is an industrial town, after all. But one contributing corrosive was road salt, washed into the river after it was used to de-ice frozen bridges.

Oh, and about drinking water: road salt's in there too. That 50-year threshold predicted by the PNAS study is also the point at which the taste of salt becomes perceptible in tap water, though a few locales are already reporting a distinct saline flavor flowing from their pipes come the winter season. On one hand, this is bad news for people on restricted diets, but on the other, hey—no need to salt your water for pasta anymore. It's pre-seasoned right out of the faucet.