Why are there so few kinds of cutlery? 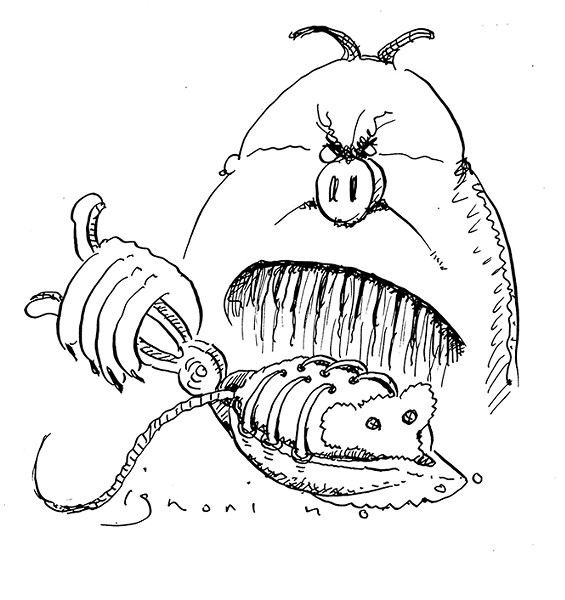 With most aspects of food (e.g., styles of cooking, pans, dishes), you could fill a book with all the ways different cultures have come up with to do the same basic task. Not so with cutlery. For all the different worldwide cuisines, your choice is chopsticks or "Western" cutlery—knife, fork, spoon. What other options are there? Are these really the only two types of cutlery that mankind has invented? —Griffin1977, via the Straight Dope Message Board

Hey, don't forget the little sugar stick that comes in a packet of Fun Dip—surely the greatest Western contribution to the cause of silverware since the knife-spoon-fork trifecta. It runs a distant fourth, true, but consider that the Fun Dip stick is both functional and edible. If you're looking at this matter strictly in terms of "cutlery," Griffin—which I'll take to mean the nonperishable utensils one uses and then reuses to transport food from serving surface to mouth—you're selling humankind short. Plenty of cultures haven't gotten around to creating their own answer to silverware because they haven't needed to. They eat the delivery device along with the food.

Look at the question this way, and you realize we've actually come up with a great diversity of eating utensils, varying widely depending on where you are. On the Horn of Africa, it's injera, a naturally leavened flatbread made from teff flour; in Mexico and its environs it's the tortilla, the end result of what's called nixtamalization, a process developed by the Mesoamericans that frees up nutrients in corn and makes it easier to grind. On the Indian subcontinent you've got naan; in the Middle East, pita. We note that in many places where there's little distance between the food and the fingers, other cultural practices have, of necessity, coevolved: Namely, the convention that the right hand is for eating and the left hand is for ... other business. (As the prophet Muhammad put it, "The devil eats and drinks with his left hand.")

If we think of how these edible delivery devices function—they can be used to pinch food, but also to scoop it—it's no huge leap to connect them with the spoon: They're fulfilling the same basic function, and indeed spoons have been around in some form or other since prehistoric times. Likewise, the knife is a descendent of the hand ax, one of the oldest human tools, which originated in Africa; using a sharpened object to hack and stab a live animal isn't too different from using it on a cooked one. It's the fork that's the real interloper in terms of eating utensils, and you might be surprised to learn that it's of relatively recent vintage.

We'll leave aside chopsticks—a story for another day—as well as a host of other, lesser utensils, like skewers. Or, heck, what about straws? IV tubes? Again, if you're stuck on the fork-chopstick spectrum, you're frankly not thinking big enough.

"The shape of the fork has been around a lot longer than the eating utensil," a recent fork-history piece from Slate reminds us. This might account for some of the suspicion forks encountered when they turned up at the Byzantine dinner table circa the 11th century: Spearlike implements with multiple prongs had previously been associated with the Greek god Poseidon and, well, the devil. The ascetic Benedictine monk St. Peter Damian was a notably vigorous detractor: Witnessing a Venetian princess using a two-tined protofork to bring food to her mouth, Peter condemned with horror "the luxury of her habits"—i.e., that "she deigned not to touch her food with her fingers." When the princess died of the plague, Peter blamed her dinner-table vanity.

Forks spread through Europe from the Byzantine Empire, but retained their effete associations: A 1605 allegorical novel written about the reign of Henry III depicted a strange colony of hermaphrodites who, pointedly, ate with forks; 100 years or so later, Louis XIV still wouldn't let his kids use them. Ultimately, though, it was the French (you know—fussy, decadent, food-obsessed) who cemented the fork's role in the Western place setting, and it's been here ever since. As its use trickled down from the nobles to the hoi polloi, the elite devised ways for forks to retain their rarefied status: Think of the salad fork, the dessert fork, the whole elaborate continental dinner service.

But for how much longer? Avant-type restaurants in the U.S. are leading the charge in eschewing the old ways and embracing edible mediums. "You sit down at the table and you say, 'Why do I need to eat with silverware?' And the answer is, 'Really, you don't,'" Grant Achatz, maybe the nation's most famous modernist chef, said a little while back. "It's almost hypocritical to create a plate of food in 2013 on barbaric old serviceware that's more than 300 years old." We're always at the whims of the elite, of course, but if what they're trying to push on us next is utensils you can eat, I can't say I mind.