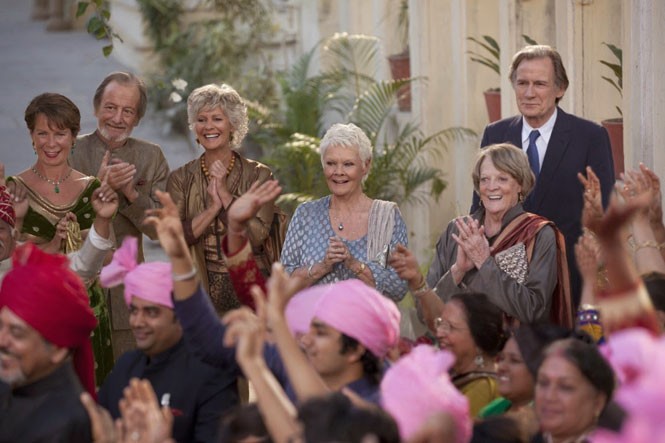 Join me, if you will, on a journey back to the late 1970s in America. Jimmy Carter was president, lapels were wide, and those who were not fever-ing on Saturday nights were often spending them in the comfortable embrace of the crew of the Pacific Princess on The Love Boat. For those too young to remember, the anthology TV series followed individual stories—usually three per episode—of romantic misadventures that were sometimes melancholy, sometimes slapsticky, and always resolved by the time the cruise completed its round-trip voyage from Southern California to Mexico.

This nostalgic detour has been brought to you by The Second Best Exotic Marigold Hotel—or, at least, by the recollections it inspired. Because, with this new installment in the tales of the Jaipur, India, hotel catering to British seniors, it's increasingly hard to understand why it's still on the big screen, and hasn't yet found its natural present-day home as a weekly series on CBS.

While four years have passed since the release of the original Best Exotic Marigold Hotel, only several months have elapsed within the world of the movie. Hotel manager Sonny Kapoor (Dev Patel) is contemplating expansion of his business prior to his marriage to Sunaina (Tena Desae), and travels to America with Muriel (Maggie Smith) to seek financing. Meanwhile, back at the original Best Exotic, the now-resident regulars face various relationship dilemmas. Flirtatious Madge (Celia Imrie) is having a difficult time choosing between two potential suitors. Recently separated Douglas (Bill Nighy) is finding resistance to his tentative advances toward Evelyn (Judi Dench). Norman (Ronald Pickup) struggles with his wandering eye in his new relationship with Carol (Diana Hardcastle). And Sonny is convinced that new guest Guy (Richard Gere) is an undercover employee of his potential investor, visiting to check the place out.

Actors of Social Security-eligible age—and particularly women actors of that age—are so rarely the focus of movie stories that there is, admittedly, something faintly distasteful about dismissing them. Maggie Smith is a treasure to be cherished as long as we have the pleasure of her company, her every incredulous eye roll and tart-tongued rejoinder a thing of beauty. There's particular enjoyment in watching Smith play off Dench, just as there is always enjoyment in watching Nighy play off anybody, or even just watching him stammer his way through Douglas's job as a tour guide getting fed his script through an earpiece. These Best Exotic movies are a kind of comfort food to a particular type of palate, acknowledging people past the age of 60 as still alive, looking for human connection and a sense of purpose. This is, I suppose, no small matter.

The movies themselves, though ... oy. It might help considerably if less time were spent on the profoundly irritating Sonny, whose tangled aphorisms, ingratiating over-attentiveness and irrational jealousy make it hard to comprehend how anyone wants to be anywhere near him, let alone marry him. But even when the focus is squarely on the seniors, director John Madden and screenwriter Ol Parker—both returning from the original—can't manage anything but the most superficial arcs as they juggle a dozen or so characters. And that's how Second Best begins to feel like a feature-film re-creation of The Love Boat's formula. There's the story with the broad physical comedy, as Norman becomes convinced that he has accidentally, drunkenly put out a "hit" on Carol (just don't ask). There's the serious one as divorcé Guy begins romancing Sonny's widowed mother (Lillete Dubey). And there's the whimsical one that gets complicated, when Douglas' estranged wife (Penelope Wilton) arrives at an inopportune moment.

Of course there's an audience for gently superficial trifles like this, just as there have always been audiences for gently superficial trifles, and long before The Love Boat ever sailed. But omnibus narratives almost always suffer from the inherent structural problem that one plot will be the one you care most about, while there's also usually one that makes you grit your teeth until it's over. Mostly, Second Best Exotic Marigold Hotel is one of those movies that just moseys along for two overstuffed hours, hoping you think its characters' rote fumblings are endearing. It's love, but it's neither exciting nor new.