Country-singing duo The Secret Sisters are getting “gutsy” 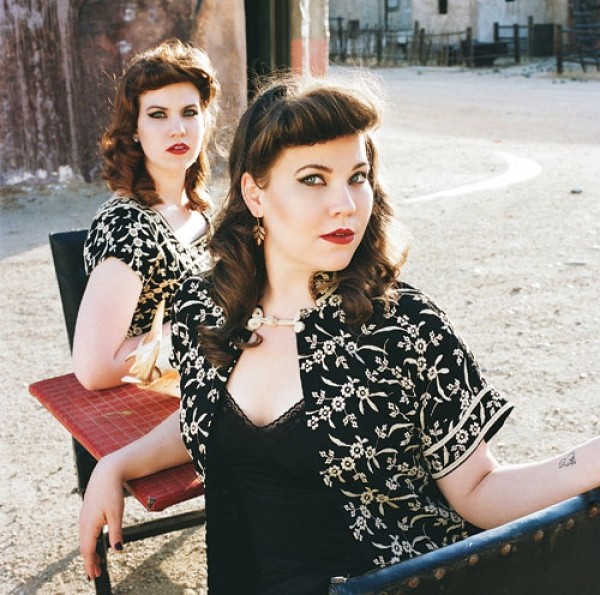 Laura and Lydia Rogers’ band name, The Secret Sisters, isn’t just alliteration or a random trio of words—the two singers are actually real-life siblings. They seem to be made from such a familial mold that their voices are almost indistinguishable from each other over the phone, a fact I quickly discover once this interview begins. But apparently it must be common for them to be asked to identify themselves before they speak during phone interviews, because they only laugh before one of them replies, “We can totally do that, we’re used to doing it.”

They even fight like sisters. The night before this interview, The Secret Sisters began their current tour, and got in an argument “over a bag of M&M’s,” Laura says. “I’m not joking.” But for the music’s sake, they always make up in the end. “We fight like crazy,” Lydia says. “At the end of the day, we know we can’t get rid of each other, so we just have to grin and bear it.”

The Secret Sisters were born in Muscle Shoals, Ala., as part of what Laura calls “a traditional Southern family”—hearing her and Lydia pronounce “I like crocodiles” could make you swoon. With a grandfather who was a banjo/mandolin player and also performed in a gospel quartet, as well as a father who is a bluegrass musician and “would always play George Jones and Tammy Wynette on Sunday mornings before we went to church,” Laura says, the Rogers sisters weren’t just surrounded by music while they were growing up; it was in their blood. “We weren’t really into sports or any other kind of hobbies,” she says. “We were just a musical family.”

Laura and Lydia’s exposure to so many American musical styles—as well as being natives of a town that’s the location of one of the most legendary recording studios in music history—influenced the neo-traditional country sound they took on when they eventually came together as a band. But what is perhaps the most definitive element of their music, angelic vocal harmonies, was perfected in church. “We were raised in a church where there was a big emphasis on a cappella singing, and so we really attribute a lot of the way that we sound to growing up just learning how to sing church songs,” Laura says.

In 2010, The Secret Sisters released their self-titled debut album, a collection of mostly covers of classic ’50s and ’60s songs such as “Why Baby Why” by George Jones, and “House of Gold” and “Why Don’t You Love Me” by Hank Williams. Laura describes their first record as a “really gentle, kind of lullaby-esque record that is very just sweet.” But most of their sophomore album, Put Your Needle Down—released in April, and produced by T. Bone Burnett—is made up of original material, and displays a new side to The Secret Sisters. “With this new one, we wanted to show a little more edge … we wanted to be a little more gutsy about it,” Laura says.

While some of the songs on Put Your Needle Down explore “moments of vulnerability,” Laura says, other songs “have a real attitude of defiance and, ‘You’re not going to pull this over on me, I’m gonna stand up to you, and I’m gonna tell you what it’s all about.’ ”

That grit is especially apparent on the haunting murder ballad “Iuka,” which tells the story of the real-life town in Mississippi, where “there was a justice of the peace … who would marry you without your parents’ consent if you were underage,” Laura says. “So many couples that we know who are now celebrating their 50th anniversary were married that way in Iuka”—including The Secret Sisters’ own grandparents. “We loved that story, and so we wanted to talk about that in a song, and then go darker and kill some of the characters,” she says.

In addition to “Iuka,” the fierce independence of the jazzy “Dirty Lie”—co-written with none other than Bob Dylan—and the many other strong tunes on the album, show that while they’re still acknowledging their influences, The Secret Sisters are now blazing their own path.

Put Your Needle Down is “more an accurate depiction of who we are, and all of the musical influences we have,” Laura says. “Even though we were very proud of [our debut], it wasn’t a record of our songs. … This one just feels so good because it’s songs that we wrote and we wanted so much to tell our own stories, and luckily we were able to do that with this record. It really feels like a progressive movement; it feels like we’ve moved forward.”