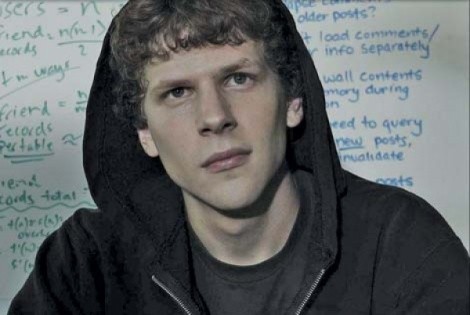 In Ben Mezrich’s brisk, engaging nonfiction book The Accidental Billionaires, computer genius and Facebook founder Mark Zuckerberg is a fascinatingly enigmatic figure defined primarily by what is probably an undiagnosed autism-spectrum condition; it’s a central irony that the guy who has connected millions seems incapable of creating his own social connections. In The Social Network—the witty, insightful, wildly entertaining adaptation of The Accidental Billionaires by screenwriter Aaron Sorkin (The West Wing) and director David Fincher (Fight Club)—we get a slightly different but no less compelling interpretation of Zuckerberg. Here, he’s the ruthless magnate who creates an empire while trying to fill a personal hole—Citizen Kane with a laptop.

Sorkin and Fincher find a brilliant framework for their tale of a tragic a-hole as they begin with Harvard sophomore Zuckerberg (Jesse Eisenberg) planting the seed for Facebook in fall 2003 with the prank hacking of dorm photo databases after getting dumped by his then-girlfriend, Erica (Rooney Mara). This stunt grabs the attention of Cameron (Armie Hammer) and Tyler Winkelvoss (Josh Pence), twin athletes with an idea for a Website to socially connect Harvard undergrads but in need of a talented programmer. Zuckerberg agrees to help the twins with their idea—but meanwhile, he’s pitching something very similar to his best friend, Eduardo Saverin (Andrew Garfield), who happens to have the seed money to get the project off the ground.

At least that’s one way of interpreting what happened. Like Citizen Kane, Sorkin constructs the screenplay largely as the recollections of events by the key players, using the framing structure of depositions taken for lawsuits against Zuckerberg. Perhaps surprisingly, there’s little attempt here to use this story as an overarching metaphor for the age of virtual interaction. Sorkin and Fincher stay focused on these specific individuals, and on their complicated real-world interactions with one another.

And that proves to be a brilliant choice, because there are some terrific characters here. Justin Timberlake—easily now the most versatile, multitalented entertainer on the planet—does sensational work as Sean Parker, the fast-talking Napster founder who latches onto Facebook as the chance to finally get his big payday; he’s effortless as the kind of guy whose primary asset is his ability to work a room. The Winkelvoss twins subtly evolve from aggrieved victims of Zuckerberg’s treachery to sons of privilege who don’t see anything wrong with using their father’s connections to arrange a meeting with Harvard’s president to air their complaints. Saverin is probably the least fully fledged character, but Garfield conveys the naiveté of a smart young guy who doesn’t imagine that this little website could turn into something that would inspire one friend to stab another in the back.

The fulcrum, though, is Zuckerberg himself, and he makes for an amazing antagonist/protagonist. Eisenberg has usually played the kind of diffident roles that have made him interchangeable with Michael Cera, but here there’s a ferocity to his performance that emphasizes Zuckerberg’s frustration at not being able to be part of the social world that seems to come so easily to everyone else. Sorkin gives sizzling lines of dialogue to plenty of the cast members, but Eisenberg gets some of the best, and he sells every one of them.

“Creation myths need a devil,” says one young attorney (Rashida Jones) to Zuckerberg near the end of The Social Network, and she’s on to something with that comparison—at least in a sense that John Milton would agree with. Paradise Lost’s Satan said it was “better to reign in Hell than serve in Heaven,” and that’s essentially the reality that Zuckerberg, perhaps motivated by similar envy and spite, ends up living. Fincher directs a great early scene in which Zuckerberg’s drunken late-night creation of the prototype “Facemash” is juxtaposed with the debauchery taking place at Harvard’s Final Clubs, the center of social life for the leaders of tomorrow. Zuckerberg’s conclusion, as interpreted by The Social Network, is that it’s better to reign online than to serve in a world with which he can’t relate, even if that means his own personal “Rosebud”—the girl he didn’t understand how to connect with—becomes nothing more than a face on his computer screen, perpetually refreshed but never real.