The Straight Dope: Drugs on Tap 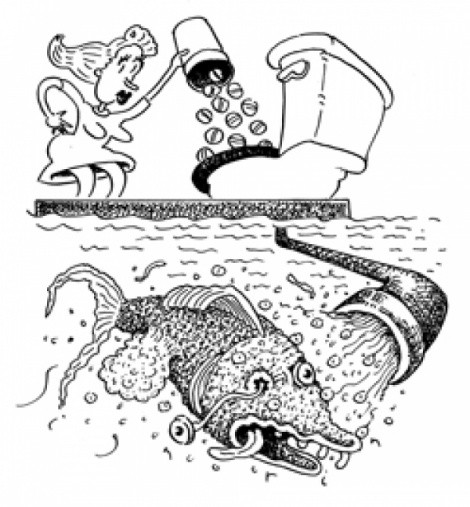 I’ve learned a few things working with chemotherapy agents in research, such as the vast majority kill cancer cells by the same mechanisms that cause the cancer in the first place. In the lab, we use very small amounts and are very careful about our waste disposal, but I was wondering: What happens when patients are on chemotherapy? Many drugs are excreted nonmetabolized and, with so many people taking drugs for all kinds of things these days, should we be worried about what’s going down the john?
—Anonymous, via e-mail


We certainly could be worried about it. As you say, all the time people are ingesting or otherwise taking on enormous quantities of antibiotics, antidepressants, hormones, steroids, chemotherapy drugs, etc.—and not all gets metabolized. Much of what doesn’t heads down the drain—as do, for instance, all sorts of chemicals that get pumped into livestock—and there’s no real reason to think some amount of it, however miniscule, won’t come back through the tap.

The issue first popped up in the mid-’70s, when EPA chemist Wayne Garrison analyzed sewage and found evidence of caffeine, aspirin and various other chemicals consumed by humans. This didn’t exactly set off a frenzy of further studies, at least not right away—it being the ’70s, there was a full slate of old-school environmental disasters to deal with. In the ’80s, though, scientists in Europe (where population is more concentrated around bodies of water) started to pay attention to the drug-residue phenomenon, and by the mid-’90s U.S. researchers were taking another look too.

And, if you look closely enough, the residue is there, all right. In the late ’90s Swiss scientists found cholesterol drugs in their groundwater; when they started checking lakes and streams, they found the stuff almost everywhere. The United States Geological Survey measured levels of pharmaceuticals, hormones and other pollutants in 139 streams across the U.S. in 1999 and 2000—80 percent of the time they found at least one of the 95 chemicals they were screening for. The medical compounds seen most regularly were steroids and nonprescription drugs, though sex hormones such as estrogen and testosterone turned up too. In a subsequent USGS study, hormones and steroids were detected in more than 40 percent of groundwater samples. German scientists have found antibiotics, beta-blockers and even antiepilepsy medicine in their water; in Canada, researchers have found cancer drugs and anti-inflammatories; in the U.K., they’ve found everything from ibuprofen to antibiotics in streams and sewage alike.

The good news is that we’re talking about some very, very small quantities of drugs here—the levels found so far have typically been measured in parts per billion or even parts per trillion. And, after three decades of study, no one’s yet produced any evidence that drug residue puts humans at risk. The less-good news runs a little longer. First, there may be long-term cumulative effects we haven’t identified yet, especially considering how persistent some residues are—clofibric acid, one by-product of a cholesterol drug, can hang around for two-plus decades. Second, the extremely low concentrations of residue in water make it hard to distinguish any such effects from ones caused by the zillion other chemicals we’re constantly exposed to. Then there’s the ongoing boom in prescription drug use: A 2004 report points out that while the U.S. population grew 13 percent between 1993 and 2003, the amount of prescription drugs we bought went up 70 percent over the same period.

Another possible concern is that we don’t know how all these drugs may interact. Some studies have found that combining different sex hormones in doses so tiny as to be theoretically insignificant can have a measurable (if small) effect. According to one USGS fish pathologist, something like this may be going on with pollutants in tributaries of the Potomac River where, in testing last year, more than 80 percent of male largemouth and smallmouth bass were found to be producing eggs, which isn’t normally part of their repertoire. Residue can also accumulate in the tissue of fish and other wildlife and get back to us via the food chain. Meanwhile, there’s always the potential problem of unmetabolized antibiotics entering the environment and helping breed a new generation of superresistant bacteria.

As the prescription-drug genie won’t be retiring to its bottle anytime soon, what can we do? Anecdotally, some people think it’s unsafe to discard unused drugs in the trash and so flush them instead; designating drop-off spots, as they’ve done in Clark County, Wash., might help on that front. Researchers are developing new sewage-treatment processes that can filter out more of the residue, while impact studies may help doctors take environmental concerns into account when choosing what to prescribe. In a better world, such things could well be a higher priority; given the world we’ve actually got, this sounds like the kind of problem that’ll have to get demonstrably worse before we really get on the case.


Comments, questions? Take it up with Cecil on the Straight Dope Message Board, StraightDope.com, or write him at the Chicago Reader, 11 E. Illinois, Chicago 60611.
cw