The Straight Dope | Elephants Gone Wild: That rhino was asking for it & a question we’re still thinking about 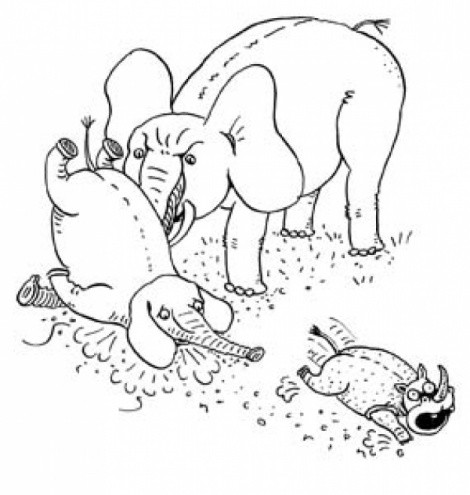 That Rhino Was Asking for It

I’ve read that elephants are now exhibiting aggression previously unseen—including raping rhinos on the African savannah. Have we truly screwed up the elephants that much, or is this merely one of those myths that is now perpetuated in the media?
—K. Honey, Georgetown, Ontario


As far as I’ve seen, the most unambiguous published claim that male elephants do with some regularity rape rhinoceroses appears in an October 2006 New York Times MagazinePachyderm, has been reported in ‘a number of reserves’ in the region.” That’s an assertion guaranteed to catch the eye of even the most inattentive reader, and it’s since appeared in other discussions of animal behavior, often phrased in ways suggesting the NYT article was the source. article titled “An Elephant Crackup?” In opening his argument that a specieswide breakdown in social cohesion has led to an upsurge in violence by elephants, author Charles Siebert offers evidence that elephant aggression has been marked by what he calls a “singular perversity”: “Since the early 1990’s, for example, young male elephants in Pilanesberg National Park and the Hluhluwe-Umfolozi Game Reserve in South Africa have been raping and killing rhinoceroses; this abnormal behavior, according to a 2001 study in the journal

But is it true? Sitting down with the Pachyderm study Siebert cites—Slotow et al, “Killing of Black and White Rhinoceroses by African Elephants in Hluhluwe-Umfolozi Park, South Africa”—we learn that between 1991 and 2001, the park’s elephants dispatched 63 rhinos, mainly by goring. The authors suggest that the animals responsible were young males who had grown up in social groups from which older males had been “culled” (read: slaughtered by government-commissioned hunters as a population-control measure) and as a result entered a state of heightened, testosterone-fueled aggression called musth much earlier in life than they ordinarily would have. Since similar incidents at Pilanesberg stopped after large adult males were reintroduced into the population, thus re-establishing the natural male hierarchy, the authors advocate trying the same thing at Hluhluwe-Umfolozi.

Wait a minute, you say—what about the raping part? That’s what I said, too. I went back through the study a second time, then a third. The reference to abnormal behavior seen in “a number of reserves” has only to do with elephants killing rhinos; nowhere is any mention made of rape. Seeing a clear need for some inside info, I had my assistant Una get in touch with one of the article’s authors, Rob Slotow, director of the Amarula Elephant Research Program at the University of KwaZulu-Natal. Professor Slotow’s reply was straightforward: The young elephants seemingly got into ritualized combat situations with the rhinos, as males are wont to do, but having no experience being in the musth state, didn’t know they were supposed to back off when the rhinos backed down, with the result that the rhinos wound up dead. “There was,” Slotow concluded, “nothing sexual about these attacks.” (He went on to report that, sure enough, the attacks on rhinos subsided almost entirely once older males were brought back on board.)

That would suggest a problem in the NYT quote above. Best case, I figured, was that the article got the underlying facts right—i.e., elephants really were raping as well as killing rhinos at the parks in question—but named the wrong study in support. That was Siebert’s best guess as well, and he sent me to G.A. Bradshaw, an animal psychologist at Oregon State, who’d been a key source for him on the Times piece. Bradshaw maintains that the elephants have been observed mounting their rhino victims and that it’s ridiculous to dismiss the possibility that the attacks have a sexual aspect. Though she prefers the term “false copulation,” she says, “it is unlikely that the act was consensual as so many rhinos were killed, so in that context and in light of current science, ‘rape’ is not inappropriate.”

There’s little doubt that decades of poaching, culling, and habitat loss have played havoc with elephants’ complex social and emotional lives, and a traumatized elephant is clearly capable of some scary behavior. But so far, experts don’t agree on what to call it.

Questions We’re Still Thinking About
In my personal and family development class (home ec), my teacher said that salt and pepper are married, so that’s why they always have to stay by each other. If they are, then one has to be the husband and the other the wife. All of the people I’ve asked have agreed that the pepper would be the husband and the salt the wife. Well, what if the fork, knife, and spoon were a family? Which would be the dad, the mom, and the kid, and would the kid be a boy or a girl?
—MoxieMolly


I’m proud to say that my kitchen recognizes same-sex marriages for condiments and cutlery.

Comments, questions? Take it up with Cecil on the Straight Dope Message Board, StraightDope.com, or write him at the Chicago Reader, 11 E. Illinois, Chicago 60611. tttt