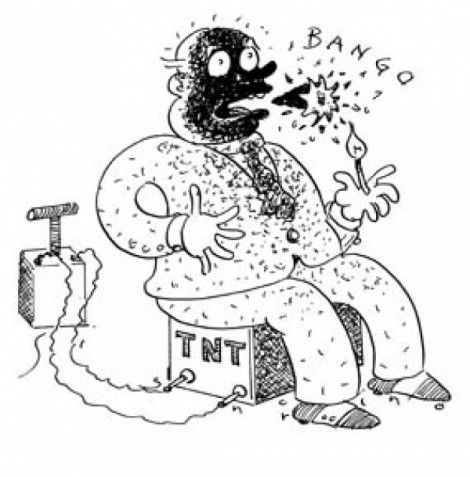 Blast It All
I’ve heard of high explosives, but is there such a thing as a low explosive? —C-W

All too often, explosives enthusiasts fall prey to the bigger-is-better mentality. It’s refreshing to see someone take an interest in the subtler, less potent stuff.

Yes, there are low as well as high explosives. To get the distinction between the two, we need to think a minute about what happens when something goes boom. Generally speaking, a chemical explosive is a substance that can be made to undergo a reaction in which it rapidly releases heat and highly pressurized gas. Once the reaction gets started it travels through the mass of explosive in a wave, and it’s the speed of this wave that in large part determines the force of the explosion; having lots of explosive go off in a very short time makes for a more concentrated and powerful blast. One way of increasing the reaction velocity and thus the explosive force is through confinement: If the explosion takes place in a tightly enclosed space, more of the gas and heat sticks around and sets off the rest of the explosive more quickly.

With these concepts in mind, we can run down the different classes of explosive as defined by the Bureau of Alcohol, Tobacco, and Firearms:

• A high explosive is one that can be detonated by a blasting cap (a small explosive designed to set off a larger charge) when unconfined. Note that we’re not using detonated in its standard dictionary sense of “blown up.” In the explosives biz, detonation refers specifically to an explosion in which the reaction travels through the explosive faster than the speed of sound, creating an extremely powerful and fast-moving shock wave. Hall-of-fame high explosives include dynamite and TNT; the phrase dates from the 1870s, not long after such things were first developed.

• A low explosive, by contrast, is one that can be made to deflagrate (read: burn very quickly) when confined. Here the reaction wave moves at subsonic speed but still generates plenty of force under the right confinement conditions. It’s the deflagration of modern smokeless gunpowder that drives a bullet down the barrel of a firearm; old-school gunpowder, or black powder, is also a low explosive, as are most large pro-grade fireworks.

• Blasting agents are mixtures of fuel and oxidizer that can’t be detonated by a certain gauge of blasting cap when unconfined; they may require a series of gradually larger preliminary explosives to get them to go off. The best-known stuff in this class is probably the combo of ammonium nitrate fertilizer and the drag-racing fuel nitromethane that was used in the bombing of the Alfred P. Murrah Federal Building in Oklahoma City in April 1995.

Hang on, Irma—what job do you have where you and your co-workers receive facefuls of pepper spray in the course of training? Are you a story editor at Jackass? Hazing coordinator at Fort Benning?

In any case, no, under ordinary conditions eating spicy food won’t help you build up a tolerance for pepper spray. For one, spicy food is designed to go in your mouth, where it irritates whatever mucous membranes it encounters. Some find this sensation pleasant, some don’t, but the effects are pretty well contained and ordinarily don’t interfere with vision or breathing. Pepper spray, on the other hand, does its incapacitating thing by getting in your eyes, nose, sinuses, and lungs—an experience that an extra splash of hot sauce can’t really prepare you for.

And, while it’s true that both pepper spray and spicy food get their kick from the same source—the chemical compound capsaicin and some of its close relatives—the pepper-spray manufacturers use a lot more of the stuff. Pepper heat is measured in Scoville units: Tabasco sauce registers at about 4,000 units; a raw jalapeño might get up around 8,000. But pepper sprays routinely boast Scoville scores of 2,000,000 and up. Experts point out that pepper-spray quality control isn’t what it could be—the contents of two identical cans will often vary wildly in apparent potency. Still, there’s a few orders of magnitude between lamb vindaloo and anything you might spray on a mugger.

OK, OK. If you’re 1. a devotee of those idiotic boutique hot sauces—you know, the ones with names like Liquid Shrapnel or Ebola Juice—that claim Scoville ratings in the mid-six-figures, as well as 2. a very enthusiastic eater who tends to get a lot of food accidentally lodged beneath her eyelids, fine, maybe you’ve improved your resistance to pepper spray a bit. Me, I’d guess you came by your tolerance naturally rather than via the contents of your lunch pail.