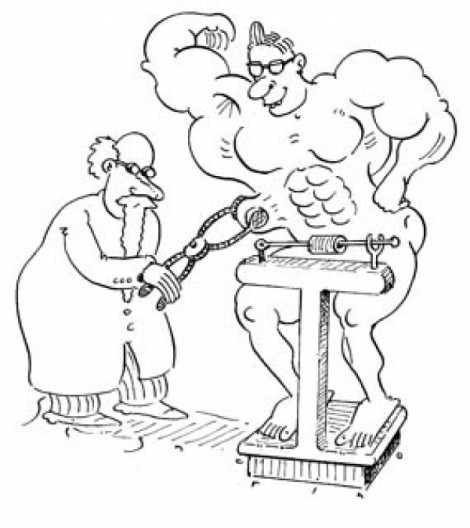 On a recent trip to the doctor, I was shown a body mass index chart, with height in feet and inches along the Y axis and weight in pounds along the X axis. The nurse practitioner showed me that it indicated I needed to lose over a third of my body weight to reach the “normal” range. I looked at her with disbelief. Sure, I need to lose weight, but even when I was in tip-top shape in college (I lifted weights), I would have still been classed as obese. How can this BMI chart be passed off as real science? —Michael Roberts

Body mass index is real science, Michael, because it conveys real information—namely, whether a person’s combination of height and weight suggests an increased risk of serious health trouble. While BMI is hardly infallible on a case-by-case basis, there’s a reason it’s been adopted by the World Health Organization, the Centers for Disease Control, et al: by and large, it works.

Many assume that the notion of BMI was hatched relatively recently, another product of weight-obsessed modern culture. Not so: It goes back to the mid-1800s and the writings of the Belgian astronomer, mathematician, and statistician Adolphe Quetelet. A social sciences pioneer, he compiled copious stats on the dimensions of the human body in an attempt to define the physical characteristics of the “average man.” (Ultimately he was hoping to link physical traits with behavior, but hey, it was the 19th century—that kind of thing was going around.) Along the way he discovered that if he divided people’s weight in kilograms by the square of their height in meters, he could use the results to compare various subjects’ body types independently of their size—a useful trick in his line of work.

Fast-forward to the post-WWII era, when those studying the relationship between body weight and cardiovascular health (as you might imagine, the insurance industry took a serious interest in such research) began to really think about how to quantify what kind of shape people were in. Statistical types tried various ways of putting height and weight together into a single, easily crunched number but found they couldn’t substantially improve on Quetelet’s version. Subsequent analysis demonstrated that the Quetelet index, rechristened the body mass index in 1972, in fact correlated well with other more direct measurements of body fat; repeatedly experts have concluded (as did a pair of nutritionists in 1985) that “Quetelet’s formula is both a convenient and reliable indicator of obesity.”

Convenient being a key concept here: a great part of BMI’s value resides in its ease of use. Plugging two very readily obtained pieces of data into a simple formula gets you a figure that with reasonable accuracy sorts people into four categories: underweight (BMI below 18.5), normal (18.5 to 24.9), overweight (25 to 29.9), and obese (30 and up). And numerous studies find a clear positive correlation between BMI and incidence of various health problems: high blood pressure, diabetes, coronary artery disease, stroke, gallbladder issues, sleep apnea, and several types of cancer. Generally the risk factor jumps as BMI gets into the obese range; mortality rates from all causes are 50 to 100 percent greater for those with a BMI of 30 or higher compared to people with BMIs that chart as normal.

This isn’t to say that BMI is without limitations. Yes, it’s great for estimating the fitness of groups of people, but used to assess any one individual it can sometimes produce an iffy answer. Since it doesn’t differentiate between fat weight and muscle weight, and since muscle is denser than fat, people who are especially muscular tend to score as fatter than they really are. (Most NBA superstars—e.g., LeBron James, listed at six-eight and 240—are classed as at least mildly overweight.) BMI also glosses over the issue of fat distribution—excess weight carried around the waist is more unhealthy than extra inches on the hips. And the link between BMI and health isn’t always straightforward: for the elderly a low BMI can be a bad sign, and research published in the Journal of the American Medical Association in 2005 found that people with BMIs in the overweight range may face no greater mortality risk than people in the normal range.

Are there methods that gauge body fat more accurately? Sure, but they tend to involve calipers, multiple body measurements, water immersion, x-rays, etc, and where fitness info is concerned, more steps tends to equal more people not getting the message. OK, so maybe the BMI chart is seeing your situation as direr than is warranted, but don’t ignore the bottom line. The chart, the nurse practitioner, and you yourself all agree: you could stand to lose some weight. And since at least a third of adult Americans can currently say the same, it seems like no time to be getting rid of a useful, if imperfect, diagnostic tool.