The Straight Dope | Mind the Silver 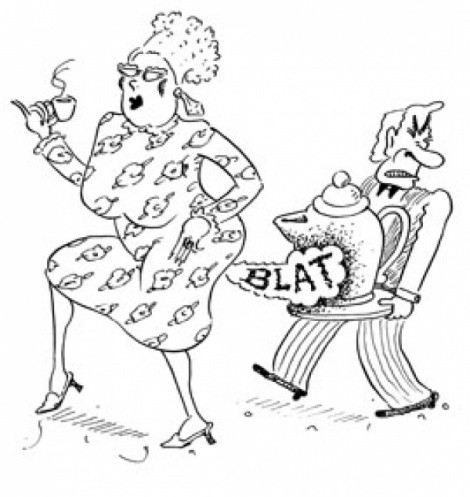 I recently read a Popular Science article by some geek who set out to manufacture silver bullets. He noted in the course of the piece that, prior to the Industrial Revolution, silver didn’t tarnish because of the lack of sulfur in the air. I’m very skeptical of this, however, because volcanoes belch forth much sulfur into the atmosphere. What’s the deal? —Nathan Hobbs

Is it true that the vast majority of silver tarnish is the result of hydrogen sulfide air pollution from power plants and industrial activity? I’ve read that in the pre-industrial era silver tarnished much more slowly because of the lower level of these pollutants. What’s the straight dope? —Aaron Muderick, Philadelphia

As the prevailing wisdom is that humankind no longer cares about anything but reality TV and Grand Theft Auto, it’s touching to find there’s still a demand among the Teeming Millions for info on topics like this one. I can’t say I completely understand the fascination here, but who am I to argue? Let’s talk tarnish.

First, though, Nathan: “Some geek”? A little respect, please. Anyone who can, as Popular Science‘s Theodore Gray apparently did, fabricate a custom bullet-shaped router bit and use it to create a high-heat-resistant graphite mold suitable for casting ammo out of 99.9 percent pure silver has attained a level of near-superhuman geekery that the rest of us can only mutely admire.

That said, I’m not buying Gray’s claim that, “by and large,” silver “didn’t tarnish before the Industrial Age.” The idea, seemingly, is that since airborne sulfur compounds are what react with silver to create the characteristic blackish patina of silver sulfide, tarnish wouldn’t have been an issue until humanity started burning mass quantities of coal, consequently pumping the atmosphere full of sulfur. But that’s likely overstating the case. While coal-burning power plants are responsible for producing most of the sulfur dioxide out there (and thus acid rain), they don’t contribute that much of the compounds that actually cause silver to tarnish, namely hydrogen sulfide—best known as a key player in the smell of rotten eggs and flatulence—and the similarly pungent carbonyl sulfide. About 90 percent of the hydrogen sulfide and more than two-thirds of the carbonyl sulfide in our atmosphere come from (you guessed it) volcanoes, salt marshland, undersea vents, and other natural sources. The remainder results from human activity—not so much the farting as the refining of petroleum and natural gas, the manufacturing of paper and chemicals, and the processing of sewage.

It’s not like Gray’s entirely off base: Industrial pollution has increased atmospheric sulfur considerably. Although there was no EPA to monitor 19th-century factory emissions, we can analyze air trapped in polar ice caps to gauge the extent of past pollution. Carbonyl sulfide concentration has gone way up in the past 150 years—levels in the southern hemisphere are about 40 percent higher now than circa 1850. And though hydrogen sulfide is more difficult to measure, since it reacts fairly quickly with various substances in the environment, records of other anthropogenic sulfur levels show a serious upward trend since the mid-1800s as well.

But, again, given that nature emits more sulfide than man-made sources even today, such increases may not have had much impact tarnishwise. Sure, silver flatware stored onsite at a chemical plant might get dirty in a hurry, but think about it: According to the EPA, an air sample taken on the open sea can contain more than 10 times as much carbonyl sulfide as one taken in downtown Philly; hell, an average fart packs 18,000 times the hydrogen sulfide found in an equivalent quantity of city air. Unless our ancestors were a lot better at holding it in than we are, I’d bet that silver tarnish isn’t much more of a scourge now than it was a few centuries back.

If you think keeping the tea set shiny is a bitch, consider the Permian extinction of 251 million years ago. You remember—the cataclysmic event where maybe 95 percent of all species on earth died off? (We discussed it last summer when the topic was undersea methane reserves.) One of the various theories about its origin is that a huge upsurge of hydrogen sulfide, produced by anaerobic microbes in the ocean, had a deadly two-pronged effect: The gas 1. asphyxiated animals and plants and 2. weakened the ozone layer, allowing high levels of UV radiation to play havoc with the food chain. What do scientists think caused these anaerobic critters to kick into high gear? Get this—a period of global warming. So, besides getting ready for rising sea levels and catastrophic weather, it appears we should also be prepared for the silver to tarnish like crazy.