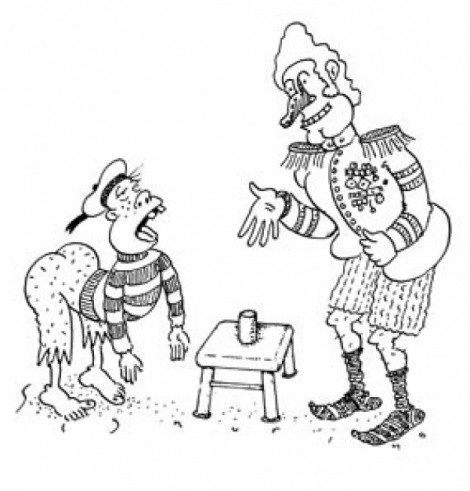 One often hears references to rampant buggery among sailors in the glory days of the Royal Navy. Sometimes, it’s said, young boys called “peg boys” were on board solely for the purpose of providing pleasure to the officers. What’s the straight dope on this? —Wm. Bligh, Chicago

Not an easy question to … well, I guess we can’t say “get to the bottom of,” can we? “Get a handle on” also has unfortunate implications. So let’s just start. Was buggery, if not rampant, at least fairly common in the Royal Navy in its prime? (We’ll define this as the 18th century through World War I.) People certainly thought so at the time. Were ships’ boys sometimes used for sexual purposes by their elders? We have sworn testimony that they were. Did some British warships routinely put—let’s be blunt—underage male prostitutes on the manifest? Don’t be ridiculous.

First, terminology. I’ve seen peg = “copulate” in a 1902 slang dictionary, and it’s easy to believe the expression was common long before that. But the earliest usage of peg boy cited in the Oxford English Dictionary is from Playboy’s Book of Forbidden Words by Robert Anton Wilson (1972), perhaps not the most reliable source. Wilson writes: “A ‘peg-boy’ is a young male who prostitutes himself to homosexuals; ‘peg-house’, a homosexual brothel. There is an unsubstantiated story that boys in East Indian peg-houses were required to sit on pegs between customers, giving them permanently dilated anuses.” Whatever you say, Bob.

More pertinent to our subject is Arthur Gilbert’s “Buggery and the British Navy, 1700-1861,” Journal of Social History, 1976. Gilbert suggests there’s some basis to the belief that the Royal Navy’s traditions consisted of “rum, sodomy, and the lash” (a witticism often misattributed to Winston Churchill). While conceding that “it is impossible to judge the incidence of buggery in the military,” he goes on to quote one British officer as follows: “I have been stationed, as you know, in two or three ships. … On the D—, homosexuality was rife, and one could see with his own eyes how it was going on between officers. I have been told that in some services (the Austrian and French, for instance), nobody ever remarks about it, taking such a thing as a natural proceeding: That may be so or not; but in any case, nobody was ‘shocked’ on board either the A— or the B—. There were half a dozen ties that we knew about. … To my knowledge, sodomy is a regular thing on ships that go on long cruises.”

Still, Gilbert suggests, common is one thing, brazen is another. British naval buggery, however prevalent, was necessarily discreet: Sodomy was officially considered a grave offense, and punishment was harsh. Buggery “comyttid with mankynde or beaste” was first made a capital crime by Henry VIII in 1533; naval buggery was specifically made a hanging offense in 1627. In 1806, there were more hangings in England for sodomy than for murder. Punishment could be brutal even if you escaped the noose. A sailor convicted in 1757 of raping a boy received 500 lashes; in 1762, two seamen received 1,000 lashes each for consensual sex. That was an extreme case, but average lash counts for morals offenses were often double those for mutiny and desertion. Merely attempting sodomy might get you “lashed around the fleet” (i.e., taken from ship to ship and whipped on each) and drummed out of the service. Officers weren’t exempt: Captain Henry Allen of the sloop Rattler was executed for sodomy in 1797, and Lieutenant William Berry was hanged in 1807 for buggering a boy. Conclusion: Whatever may have gone on beneath the poop deck, sex with boys at sea was never openly tolerated in the Royal Navy, let alone made a fixture of the officers’ mess.

Eventually attitudes softened. Though sodomy remained a capital crime until 1861, the last British naval execution for the offense was in 1829, the last in the U.K. itself in 1835. After that, until legalization in 1967, the act was punishable by 10 years to life. In short, to borrow from George Carlin, those convicted of sodomy were sent to prison where, in all likelihood, they were sodomized.