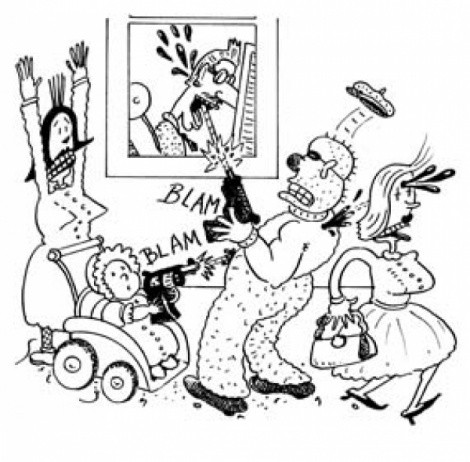 I often see statistics on the number of deaths in the U.S. related to handgun accidents and murders by civilians. What I think would be a powerful statistic next to this is the number of people that have been saved by the use of a firearm. I have a funny feeling it’s a lot less than the number of innocents killed. —Scott Weber

There’s a reason you see plenty of examples of the former statistic and few of the latter. Coming up with a handgun-deaths figure isn’t so tough—you just count all the people that get killed and subtract out the ones that don’t have pistol slugs in them. But tallying how many bodies haven’t piled up thanks to civilian gun ownership means, at the least, producing reliable estimates of how often the would-be perpetrators of violent crimes either 1. were foiled by someone packing a firearm or 2. considered the prospect of being so foiled and got cold feet. And neither of those numbers is easy to come by.

You might think that incidents in category 1. would be fairly countable, at least compared to those in group 2. But the actual number of defensive gun uses, or DGUs, that occur in the U.S. each year is surprisingly elusive. Many researchers trying to track DGUs have come to believe that surveying the populace about experiences with crime yields more accurate information than using police stats, but methodology varies widely from study to study, and the results have been all over the place. Looking at figures from the mid-’90s, we see that the National Crime Victimization Surveys, conducted for the Justice Department, came back with an estimate of 108,000 DGUs annually, whereas data collected in a Florida State University phone survey suggested that the number was more like 4.7 million. Needless to say, the experts disagree loudly about the reliability of such figures, and the huge discrepancies between them seem to be a function of how the questions were asked. Some argue that DGUs inherently tend to be overreported—you’re encouraging people to recount their own heroics, after all—but others say underreporting is at least as likely, as respondents could be clamming up out of concern that their defensive gun use might not have been legal.

If that’s not inconclusive enough for you, just watch researchers try to quantify the crime-deterring effect of allowing civilians to walk around armed. Some have tried to get at this issue in what may seem to be an overly straightforward way, namely by asking criminals how they feel about a gun-toting citizenry. A 1986 National Institute of Justice survey of convicted felons, to take one example, provides at best a mixed bag of insights: More than a third of the felons questioned said they worried with some regularity about being shot by victims, but roughly 40 percent said they never considered the possibility; while 39 percent said that at least once they’d decided not to go through with a crime because they believed the person they’d targeted was armed, nearly 25 percent insisted they were actually drawn to the challenge of confronting an armed victim. With data like this, you’ve got all the reliability problems that typically attend self-reporting plus what may be an extra helping of bravado—I’ll buy that a few criminals really do get off on going up against a gun wielder, but a quarter of them?

The other main method for gauging the deterrence effect is to correlate crime statistics with the prevalence of legally owned guns—a task involving more variables than a month of algebra homework. In his controversial 1998 book More Guns, Less Crime (a punchy title, one must concede), economist John Lott analyzes changes in violent-crime figures in the 10 states that adopted so-called shall-issue laws—restricting authorities’ discretion in denying concealed-carry permits—between 1977 and 1992 and projects that 1,400 murders, 4,200 rapes, 60,000 aggravated assaults, and 12,000 robberies would have been prevented had such laws been in effect nationwide. As you might expect given the counterintuitive nature of Lott’s argument, there followed a deluge of criticism contending that the reductions in crime he points to aren’t in fact statistically significant; what looks like a relative drop in crime in some states may be an effect of the crack-fueled mid-’80s crime boom in others; etc. And no consensus has emerged in the years since. A 2004 report by the National Academy of Sciences concluded that existing methodology and data simply weren’t equal to the task of linking gun laws and crime rates and called for some unspecified new approach.

Stats do suggest that concealed-carry permit holders are a particularly law-abiding bunch. But that’s a problem from a deterrence perspective: It’s those with criminal records of their own who disproportionately tend to be the victims of gun crime. Maybe we need a buddy system—something to pair people who are allowed to carry a gun with people who could actually use the extra protection.