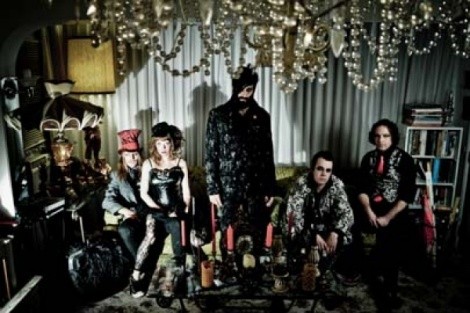 For many local musicians, releasing a single EP would be viewed as a huge accomplishment.

Not so for The Suicycles. Beyond their two EP releases earlier this year, the group made a video to an unreleased song, started a radio show and have a full-length album, Sex, Drugs and Death, out June 17.

The Suicycles were created in 2010 when frontman Camden Chamberlain and drummer Van Christensen shifted their attention to new music not meant for their main project, Cavedoll, and created a two-piece band with other instrumentation coming off a laptop. It was a questionable move, since Cavedoll had recently been revitalized and released a new album.

They recruited Robert Roake on guitar, Chris Cole on bass and Kellie Penman on keyboard to complete the initial Suicycles, which gradually made it easier for Cavedoll to fade away.

“They both co-existed for a time, but eventually it became clear that The Suicycles had become my focus,” says Chamberlain. “Cavedoll had lived a good life, so the time felt right.”

The Suicycles hit the studio in late 2010, writing more than 30 songs while bringing in each new member to add to the recordings and, eventually, move into the Suicycles house/home studio.

During this time, both Chamberlain and Roake had become inspired by Teresa Flowers’ program on UtahFM.org and decided to launch their own show on the Internet radio station. Waiting for the Rapture With the Suicycles gave the duo a chance to promote their latest works while bringing in guests and conversing about whatever topics they saw fit.

Roake said the show’s “been going very well. We have had some great guests and been able to promote some cool new local music. After several months, we can almost work the CD player at the station, so that is going to be great soon, too.”

Since the start of 2011, the band has been “blitz-attacking” the music scene, first with random tracks leaked in January, then with the EP 4 Psychotic Car Rides in February, the video for “SL,UT” released in March, several concert appearances in April and then their second EP, Experiments in Being Awake, in May. Now, the group looks to cap off their musical exploits with the release of the full-length album Sex, Drugs and Death.

The album sounds nothing like Cavedoll and barely resembles what’s been released so far by The Suicycles, showcasing every member’s unique talents in the dirtiest electronica-rock they could muster. It’s as if they are saying to the listener, “You’ll hate us in public, but love us in private.” The album probably will be a secret favorite of many.