The Sweet Side of 3 Cups | People | Salt Lake City Weekly

The Sweet Side of 3 Cups

Amber Billingsley was born to bake

“I cannot think of one restaurant experience that I’ve had where I haven’t walked away feeling enriched,” Amber Billingsley, pastry chef at 3 Cups tells me over lunch at Alamexo.

Billingsley began her food service career about 25 years ago and is now happily sifting and stirring away in the kitchen at 3 Cups in Holladay—a new coffee house and bakery in the heart of the hip and happening development on 2300 East. From brioche to gelato, her seemingly magical baking touch can turn flour, sugar, butter, cream and any other ingredient into works of delicious art—both sweet and savory.

Not classically trained in culinary school, Billingsley took to the craft rather organically while working the front-of-house at Oasis Café—in addition to being a single mom, a cook at the pre-school her son attended, and also a student at Salt Lake Community College. When the pastry chef left the post there in 2000, the executive chef knew that Billingsley enjoyed cooking so they asked her if she’d like to move to the back-of-house and train to make pastry.

“There were some miserable failures, but I loved it,” she remembers. “I got back there and it was like, these are my people, I get this!”

Aside from learning to make commercial-quality pastries at Oasis, Billingsley also met her future husband, chef Robert Angelilli, there. Married for 12 years in September, Billingsley and Angelilli have also shared a professional kitchen at Vinto as well.

“I didn’t have any desire to work at the same restaurant he [Robert] worked at,” she recalls of her meeting with Vinto owner David Harries. But Billingsley found the opportunity fascinating.

“David Harries was a great mentor to me and gave me the support to do what I wanted to do,” Billingsley recalls. She hadn’t worked on a professional Carpigiani gelato machine before or taken the time to figure out the science of gelato until then and Angelilli had already created a really good base recipe to work from. “He’s the one who trained me on the machine and got me acquainted with it—and I fell in love with it.” 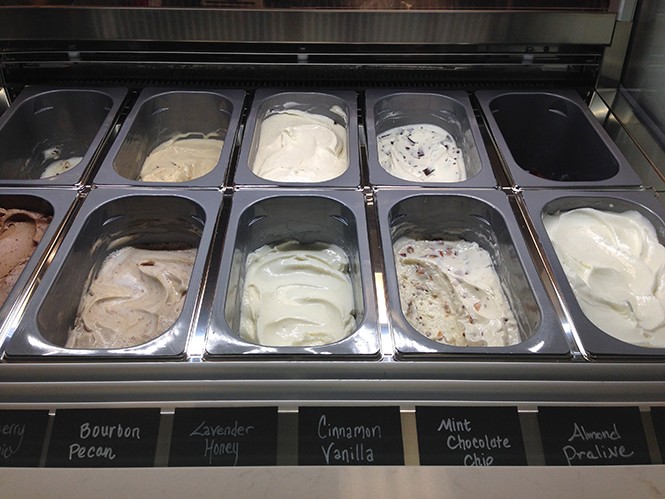 And it’s Billingsley’s commanding mastery of gelato that makes her stand out in Salt Lake’s culinary world. After repeated attempts to bring Billingsley in on the ground floor of 3 Cups, it was the promise of gelato that finally won her over. “They showed me the floor plans and the capacity and the kick-ass ovens and I said, ‘but I’m not done making gelato yet so if I move over with you, gelato has to be a part of it’.”

A ten-flavor serving case at 3 Cups allows Billingsley to exercise her gelato creativity at will. “I enjoy doing gelato because the medium is so receptive to immediate gratification as far as flavor and experimentation,” she explains. “If you get inspiration for a new flavor or a new recipe to try I can just spin that into gelato and 20 minutes later it’s there—that’s when I get excited.”

Early in her restaurant days, Billingsley was originally an aspiring journalist—writing for Catalyst and Salt Lake magazine. She speaks fondly of her time spent writing about the food community but recalls the reality of her choice. “It became less important to do the writing and more important to focus on pastry. I had to devote all of my energy to that. I miss writing because of the really cool people I met.”

To regain some of the connection to the food industry that’s slipped away since she ceased penning columns, Billingsley is actively involved in the Slow Food Utah movement and a member of the organization’s board.

And although the first six months of business at 3 Cups have kept Billingsley busier than usual, she and Angelilli are still focused on enjoying Utah’s fast-changing food culture as much as possible. Oh Mai, Mazza, Takashi, Naked Fish and Handle all factor into their regular dining routine. “I like to go to Pago and Finca with my mom—she loves Courtney’s desserts,” she finishes, scooping up a final bite of chocolate chili ice cream at Alamexo—which, like Billingsley’s life—is richly layered with surprises.