No spirit, no heart, no fun 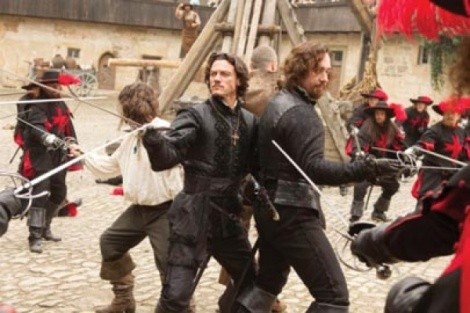 There are luscious possibilities in the notion of a gearpunk Three Musketeers. This movie posits a secret hiding place in Venice in which Leonardo da Vinci hid all his plans for cool crap that his contemporaries weren’t ready for. And gorgeous guys in leather wielding swords have to bust in. How could any of this be a bad thing?

From this apparently un-screwupable beginning, which The Three Musketeers screws up, it continues to screw up what should have been a no-brainer, perhaps even the next Pirates of the Caribbean: funny, sexy, raucous adventure with a wink, some good flirting, neat-o dueling and just a whole buncha goofy nonsense. Instead, it is leaden where it should be light. It is the epitome of empty soulless corporate filmmaking. If Alexandre Dumas wrote a Resident Evil movie, this is what it would look like. He’d kill himself afterward, but this is what it would look like.

It takes an hour to get itself into gear. It has the splendidness of the entire Renaissance as its playground, plus the additional fantastical elements of gearpunk, and the best it can come up with is jokes about bird crap. It diminishes our iconic triumvirate of musketeers—Matthew Macfadyen as Athos, Luke Evans as Aramis and Ray Stevenson as Porthos—by turning them into the Three Stooges. It tries to tell us that Logan Lerman is an action hero in the making. I once had hope for this kid, but he does not inspire anything positive here.

I don’t care if the movie attempts to rewrite the entire history of the 17th century. I don’t about the random accents. I don’t even care about the absurd coincidences: I know they’re in the book. I just want it all to have some spirit, some heart. Some damn fun.

The Three Musketeers cheats. It’s flat and empty. And it ends with the threat of a sequel.