Dougall, Waddoups and Oda celebrate their win over the people of Utah. 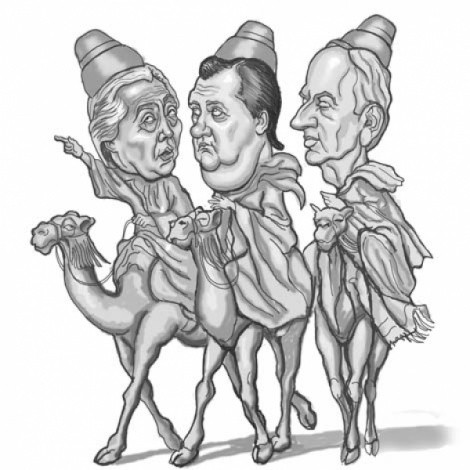 It was my lucky day. I had just picked up some tartar-reducing dog food at my vet’s office when I caught a glimpse of three of our most illustrious public servants entering a new gelato emporium on the corner of 9th and 9th. They were easy to spot: Each was packing an official Utah state handgun, known as the Legislator’s Special, and each walked with the easy swagger of those who carry the burden of great power.

Leading the group was Michael Waddoups, the silver-haired, heavy-lidded president of the Utah Senate; next came Rep. Curtis Oda, the marine sharpshooter from Clearfield, who was keeping a sharp eye out for dung-bombing pigeons and suspicious-looking kitty-cats; bringing up the rear was Rep. John Dougall, one hand on his sidearm and the other on his BlackBerry, licking his lips as he thumbed the smudged screen.

It was the day after the most successful legislative session in Utah history, and just hours earlier it had been announced that the Utah Legislature had been awarded the prestigious Lord Acton Prize, which recognizes that “entity that exemplifies the totalitarian spirit memorialized in the famous axiom of Lord Acton: Power tends to corrupt, and absolute power corrupts absolutely.”

The Lord Acton awards committee noted in its announcement that the Utah Legislature was the first unanimous winner in the 200-year history of the prize: “We congratulate the 80 Republican legislators for exercising absolute power in matters both large and small, from such ridiculous measures as exterminating stray cats to such sublime achievements as curtailing citizen access to public records.”

I was reluctant to intrude upon the privacy of these distinguished public servants, who have been transfigured from dim-witted mediocrities into infallible authorities by virtue of the holy Republican priesthood. Nevertheless, this was an opportunity to rub shoulders, or maybe even to share a gelato, with luminaries of such recognized stature. At the very least, I might be able to come away with an autograph, assuming, of course, that basic literacy was within their skill set.

With great circumspection and requisite humility, I approached the table where now they were enjoying their victory gelatos.

“Begging your pardon, my lords, I don’t want to interrupt your confab, but I just wanted to extend my congratulations for winning the prestigious Lord Acton Prize. I know I’m overstepping my bounds, but if I might have just a few minutes of your time, I would be most grateful if I could pick your brains.”

They were eating in unison, but at my question, they all paused, each balancing a globule of gelato midway between cup and lip. They traded glances and then all at once burst into snort-like laughter.
“Brains! As if!” said Senate President Waddoups. “Listen, lad, brains don’t have nothing to do with it. Being in the state Legislature is one of the few places on Earth where brains is an actual impediment to success.”

I started to sit down, but Rep. Oda drew his Browning handgun and waved me away.

“Then what is the secret to your success?” I sincerely wanted to know.

“If you’ve lived in Utah for any amount of time, you ought to know by now,” said President Waddoups, sucking down a scoop of gelato. “What matters is authority, which we have by virtue of being Republican, which is the only true party. Winning! Republican from republic, as opposed to Democrat from democracy. Duh! We made that a law, if you remember. Now our kids is punished if they say democracy instead of republic.”

I wanted to know which came first, being Republican, or being vested with Authority.

“Comes to the same thing,” said President Waddoups, his face crinkling in reptilian benevolence. “People in Utah is socialized to accept authority”—at the word “socialized,” Rep. Oda stopped scanning the room for feral cats, and Rep. Dougall stopped sexting on his BlackBerry.

“No, no, I said socialized, not socialism,” said President Waddoups. “Father knows best in Utah, so when Father speaks, the thinking has been done, as my friend Brother Packer so authoritatively likes to say. Our culture is so saturated in authority that it’s like the water that fish swim in. Water, what water? Authority, what authority?”

President Waddoups savored another scoop of gelato. “Authority is inherently good and virtuous, so we don’t need transparency or stiff-necked media types looking at our private sexting, I mean, texting, right, Brother Dougall?”

I told my betters that I had learned a lot, and that I sustained them thoroughly.