The hand of the federal government lies heavily on the state's prosecutions of two former AGs on corruption charges. 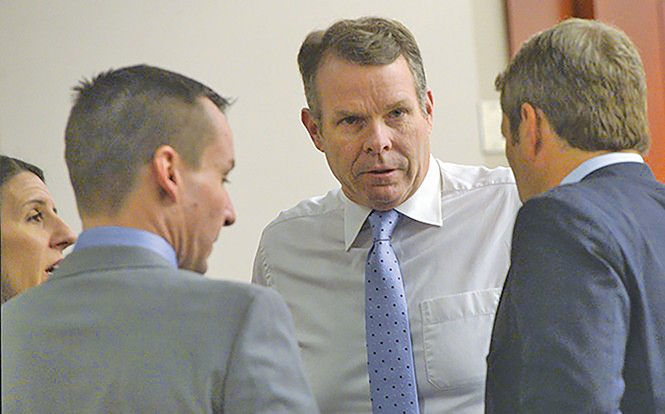 As the state rolled out its case against former Attorney General John Swallow in early February, two things became apparent. One was that former AG Mark Shurtleff and his "fixer," the late Tim Lawson, while not on trial, were center-stage for prosecutors intent on showing Swallow was part of a conspiracy of extortion and bribery. The other was that Swallow was seemingly little more than a bystander in some of those allegations.

While Salt Lake County veteran prosecutors outlined the case in 3rd District Court, there was another player at work, largely hidden from view. That player was the federal government, and its fingerprints—often times relegated to motions, emails and frustrated conversations—are the Touhy regulations.

Roger Touhy was an Illinois inmate who sued his penitentiary's warden in 1951 for access to federal documents he claimed showed that his conviction was based on fraud. The U.S. Supreme Court ruled that the feds were right to restrict access to their files. Out of that ruling came regulations that, in both the Shurtleff and Swallow prosecutions, played a significant role. "Touhy is a federal regulation that the U.S. government uses to determine what they are and are not going to share with third parties, unless they determine it's material to the case," Davis County Attorney Troy Rawlings says.

The Department of Justice cited Touhy in denying the defendants access to evidence their attorneys have argued they are constitutionally entitled to. Less overtly, Touhy shaped the direction the prosecutions have taken. This was apparent to Rawlings, who prosecuted and ultimately dismissed all charges against Shurtleff, when witness Marc Jenson outlined in Swallow's trial an alleged $35-million conspiracy involving the Utah Transit Authority (UTA), Utah Speaker of the House Greg Hughes and former U.S. Sen. Harry Reid.

Rawlings' and Shurtleff's defense attorneys spent years asking the Department of Justice and the FBI for material relating to similar allegations.

"Since October of 2013, the FBI/DOJ has adamantly maintained that the UTA and Whitewater VII matters relate to 'another separate investigation,'" Rawlings wrote in an email response to questions from City Weekly. The Whitewater VII development project of a FrontRunner stop in Draper was alleged to be central to the conspiracy. While the feds acknowledged having records, "They have refused to turn the evidence over, wrongfully citing the federal Touhy regulation," Rawlings continued. He wrote that both the Utah United States Attorney's Office (USAO) and Salt Lake County District Attorney Sim Gill had asked him not to pursue that investigation, "as they have maintained they are in no way related to the Mark Shurtleff/John Swallow investigations and prosecutions." The Utah USAO's spokesperson said that her office couldn't comment, as it was recused from these cases several years ago. Gill did not respond to a request for comment.

Ironically, Rawlings says, local FBI agents in January requested his information on Whitewater VII for the Swallow case. "I kid you not," he says, "I have the letter."

Part of what complicated this situation was that the local FBI office and the Utah Department of Public Safety (DPS) agreed to jointly investigate the two men and report to the state. But when Rawlings sought the evidence they gathered for his prosecution of Shurtleff, the feds told him he had to go through Touhy. "Touhy became the God of this case," he says.

If the feds thought that Rawlings would follow their lead and keep his prosecution limited to allegations that Shurtleff shook down Jenson, they were wrong: The prosecutor called their bluff and ultimately dismissed the charges.

Swallow's lead defense attorney Scott Williams understands Rawlings' frustrations. He says he had not thought there would be any "Touhy requirement" to the case, only to find that "the Touhy process was being used and continues to be used in an obstructionist manner," much, he adds, as Rawlings complained about. Williams wants to examine on the stand federal and state agents, including controversial DPS Agent Scott Nesbitt. While Williams says that he's been granted authorization by the feds to do so, "there's been reference to a potential for limitation on the scope" of his questions. Those limitations, he's been told, are much like porn: "You'll know them if you see them."

Rawlings says the Swallow prosecution, notably in terms of the about-face the FBI performed on the centrality of the alleged Whitewater VII conspiracy, serves to underscore his complaints that the feds sought to control his prosecution of Shurtleff and stop his bid to mount a grand jury investigation of Sen. Reid. He points to Williams receiving, weeks before the trial, 848 pages of agent notes, something the feds withheld from Rawlings for years.

"We don't prosecute people in America without giving them the evidence—unless you are the U.S. government," he says.