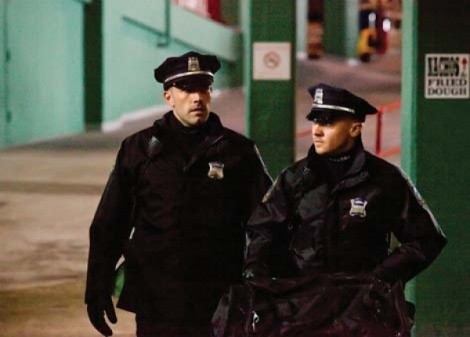 Ben Affleck’s adaptation of Chuck Hogan’s novel Prince of Thieves has been re-named The Town, and I suspect that’s not just to avoid any confusion with Robin Hood. Hogan’s story was as much about its setting—the working-class, heist-happy Boston neighborhood of Charlestown—as it was about the people who lived there. Above all else, it dealt with the pull of the place where you grew up, the rhythms and habits of which become part of you, like tattoos on your soul.

Affleck clearly understands that pull. As a writer, he first turned to the working-class folk of his native Boston in his Oscar-winning script with pal Matt Damon for Good Will Hunting; as a director, he made his debut with the Boston-set Dennis Lehane crime-drama adaptation Gone Baby Gone. He continues to stick to familiar territory in The Town, and as tempting as it is to want any artist to “branch out,” it’s hard not to acknowledge how good Affleck has become within these borders.

In addition to co-adapting the script and directing, Affleck stars as Doug MacRay, a Charlestown native who’s also the brains behind a bank- and armored-car-robbing crew that includes his best friend, Jem (Jeremy Renner). During one robbery, the hair-trigger Jem briefly takes bank manager Claire Keesey (Rebecca Hall) hostage, then worries that she could eventually identify them to the authorities. When Doug checks up on Claire to determine whether she’s a threat, he unexpectedly finds himself drawn to her, even as FBI agent Adam Frawley (Mad Men’s Jon Hamm) begins putting the pieces together and closing in.

As an actor, Affleck has often seemed to be trying too hard, and there was reason to be concerned that working as his own director, he might not find his own best performance. But he’s practically wearing a second skin here, effectively capturing a guy whose tentative first steps at changing his life—giving up drinking and joining AA; trying to separate himself from his longtime attachment to Jem’s sister, Krista (Blake Lively)—have him wondering if he can escape The Town’s gravity entirely. It was already clear from Gone Baby Gone that Affleck knows how to direct actors, and he proves it again with Renner’s edgy performance and a sly piece of work from Hamm as a screw-the-rulebook fed who gets some of the script’s best lines.

Affleck’s also got a keen sense for the crime-thriller genre, and it’s probably here that he stretches himself most. There were plenty of effectively tense moments in Gone Baby Gone, and he nails that tension again here, particularly during The Town’s climactic robbery of Fenway Park. But he’s also surprisingly terrific at action set pieces, including a thrilling extended car chase through the narrow streets of The Town, and a cops-and-robbers gunfight that’s edited with surgical precision. While this may be primarily a character-based drama, it’s got a sense for action beats that makes something like Takers look even more like the sloppy, lazy junk it is.

At its core, though, The Town—like Hogan’s novel—is best as an exploration of how a culture’s misguided pride in its down-and-dirty history becomes the way it defines itself to its own self-destruction. Affleck doesn’t have time here to delve into the locals-vs.-gentrifying yuppies dynamic in the same depth as Prince of Thieves, but it’s just present enough—in the arrival of OxyContin as the drug of choice, and in Doug’s challenge to the aging local crime lord (Pete Postlethwaite)—to provide a context for Doug’s attraction to Claire, who represents everything The Town isn’t. As much plot as Affleck efficiently condenses from Prince of Thieves, he never forgets to provide the atmosphere that is The Town’s foundation.

He does make one fairly significant change in the story’s resolution, one less bleakly convinced that these cycles are eternal—and, frankly, one that doesn’t feel quite right for this story. Maybe he felt he’d been down that road already with Gone Baby Gone. Maybe it’s a hint that Affleck himself is ready to move on. But if The Town is the kind of movie he’ll continue to make as long as he keeps getting pulled back to Beantown, maybe we can convince him to hang in there just a little bit longer.