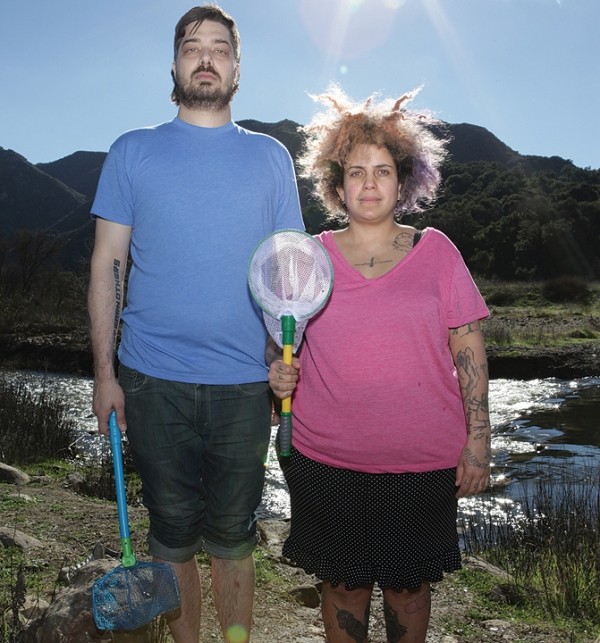 Earlier this year, seminal Rhymesayers emcee Aesop Rock and Moldy Peaches anti-folk singer Kimya Dawson teamed up to form the band The Uncluded, which, for lack of a better term, falls under the genre folk-rap

“Is this really the best name for it?” I ask Aesop in a recent phone interview. “Uh, I don’t know. I guess folk-rap works … or maybe ‘fap,’ ” he says with a laugh.

Dealing with something as new and strange as folk-rap, fans of both artists approach The Uncluded with some caution—typically describing it with words like “juxtaposition,” “odd” and an “unlikely pairing.”

Historically, rap fans have been leery about their baby holding hands with other genres. Aside from Run DMC and Aerosmith’s 1986 crossover “Walk This Way,” just about every attempt to make something sound “urban” has fallen flat—just ask Brad Paisley and LL Cool J about their country-rap belly-flop “Accidental Racist.”

But for an artist like Kimya, who’s been a longtime fan of hip-hop music, making the jump to rap wasn’t a big leap. “I feel like a lot of my songs aren’t too far from rapping anyway,” Kimya says. “There’s certain shows where we’ve had people come up to me and say, ‘I really like how you rapped on that song,’ and I would be like, ‘I’m singing!’ ”

Perhaps this is one of the many reasons nothing seems forced with The Uncluded. Their debut album, Hokey Fright—which earned its name from a phrase Aesop’s grandmother would use instead of saying “Holy shit!”—is a strange experiment on the surface. But unlike rap-hybrids of the past, everything about this album feels genuine.

“When we first started making the songs, I had this feeling, ‘Well, it’s kind of working,’ ” Aesop says. “There was usually one portion of an e-mail that had something written on it along the lines of, ‘This could suck, do what ever you want to it.’ ”

For the unfamiliar, Aesop Rock is a brilliant and wordy emcee. His latest album, Skelethon (which he produced himself over a period of five years), is a throwback to a meticulous Definitive Jux Aesop; it’s dark, meticulous and cryptic and probably his best work since None Shall Pass.

Kimya, on the other hand, is the queen of simple. Her sound is built around her tiny voice and a few simple guitar chords. Most of her songs float somewhere between a two-note range, and it wouldn’t be a surprise if she occasionally (maybe purposefully) flubs her songs during live sets—this is part of her appeal.

However, when these two come together, it’s strangely refreshing. The calculated, metaphor-heavy wordplay of Aesop Rock somehow pairs nicely with the childlike melodies Kimya helps create.

On the track “Organs” (a PSA of sorts about the importance of donating organs), Kimya rap-speaks the words, “Turtle gave its shell to the crab who gave its eyes to the bird who gave its wings to the bat/ The bat gave its sonar to the dolphin who gave its blowhole to the whale who gave its tail to the cat.” Aesop then interjects with his familiar baritone voice, “There will be a system which allows them to unzip your skin/ cherry-picking innards from the synthesis they pickle in/ and someone that you never meet will wake on a convenient day, marvel in the lucky news, plug into your DNA.”

If anything, The Uncluded is sophisticated rap dressed as catchy children’s folk music, but again, it’s foolish to even attempt to name it something … like “fap.”

“I feel like it was natural and therapeutic to me, and so it just kept continuing,” Kimya says. “We never thought about how it would come across. It was just, these are the songs we made together!”