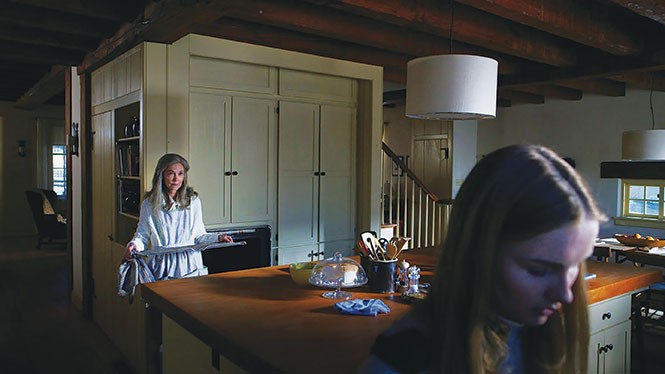 I think I've figured out the secret of M. Night Shyamalan—his "twist," if you will. I bet he turns out to be an alien sent to Earth to study humanity. Looking for our weak spots, maybe, except he really doesn't have the first clue about us, and his experiments—which have, so far, taken the shape of movies—mostly go all wrong. He may have imagined, with his flawed understanding of what makes us tick, that The Village and The Happening and (dear God) After Earth were insightful explorations of the human psyche. Or—oh, I bet this is it!—it's all been one big ongoing test of our patience. How long will we suffer being poked, prodded and generally annoyed if the first such poking (that would be The Sixth Sense) isn't unpleasant?

Obviously, Hollywood would have to be in on it. And to be fair, the idea that studios are headed by nefarious aliens who mean humankind no good would explain a lot.

Alas, what is actually going on with Shyamalan—in the great tradition of Shyamalan—is likely so ridiculously mundane as to be barely worth discussing. Maybe he really is just a guy who had one, maybe two (Unbreakable, anyone?) decent films in him. Bor-ring!

And now we have The Visit, which is another terrible Shyamalan movie that relies on people behaving in ways real people wouldn't behave, in a situation that makes no damned sense at all because otherwise there would be no story. And—also in the grand tradition of Shyamalan—there's pretty much no story anyway. A couple of kids—15-ish Becca (Olivia DeJonge) and her little brother, Tyler (Ed Oxenbould), who's about 12—spend a week with their mother's parents, Nana (Deanna Dunagan) and Pop Pop (Peter McRobbie), and maybe there are odd doings afoot at their remote rural Pennsylvania house. Is Pop Pop up to something nasty in the woodshed? Does Nana's penchant for strange nocturnal behavior mean she's a werewolf? Why shouldn't the kids, as Pop Pop instructs, ever come out of their room after 9:30 at night? Why shouldn't they go into the basement? Is mold really the only unpleasant thing down there?

Here's a "twist" that came as quite an irritating surprise to me as The Visit opened: This is Shyamalan's found-footage movie, and if he thought he had something to add to this long-played-out technique, there is no evidence of it here. In fact, it appears to be something of a dodge: Becca, bursting with all the pretensions of teenage auteurs, is making a documentary about their trip to share with Mom (Kathryn Hahn), who hasn't seen her parents in 15 years after a falling out that Mom refuses to talk about. Would a loving mother, as she appears to be, really let her kids go off on their own to the home of people who are practically total strangers? But that's the least of this scenario's plausibility problems.

Is the Becca character Shyamalan's shield? Will he claim he was sending up affected, self-important young indie filmmakers who aren't able to craft an effective movie or tell an entertaining story? As is almost always the case, the found-footage conceit eventually collapses into people running around with cameras, when cameras should be the last thing on their minds.

There appears to be a movie happening here, but it's all flimsy, halfhearted feints at empty air. Becca's explanation to her brother about how old people get sad and confused and have medical issues, and there's nothing wrong or creepy about that, may be true—and it's certainly nice to see older people figuring in what amounts to a horror movie—but that turns out to be a dead-end sidetrack. A few mentions of "the elixir" that Becca would like to acquire for Mom, something that will help heal her relationship with her parents, sounds intriguing, but means nothing. The Visit never gets anywhere near a meaningful—or even shallow—exploration of the relationship between grandparents and grandkids, or family secrets. And though it clearly hopes to elicit emotions along those charged tracks, it does nothing but inspire outrage that Shyamalan has, once again, managed to trick us into wasting our time on anticlimactic banality.