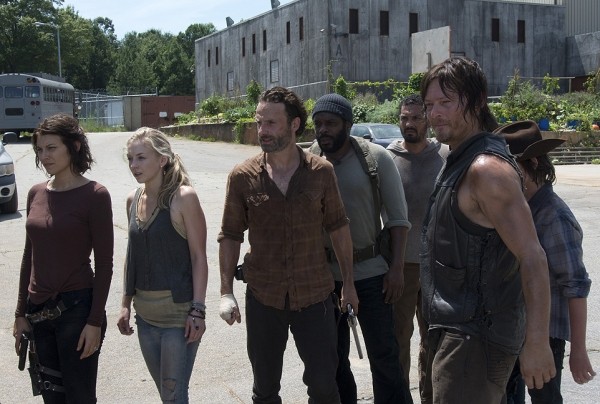 Special: So this is happening: a 90-minute “avant-garde twist on the classic holiday variety show” featuring the Muppets and Lady Gaga that’s not at all a pre-Christmas infomercial for her (relative) flop of a new album, Artpop. Sure, Gaga’s recent hosting gig on Saturday Night Live proved she can handle comedy, but can middle ’Merica handle a primetime Thanksgiving dose of hot girl-on-puppet action? And good luck explaining to the kiddies who guest stars Elton John and RuPaul are. The Only TV Column That Matters™ will leave the turkey-dress jokes to lesser TV critics.

Midseason Finale: The bleak—even for a zombie apocalypse—first half of Season 4 concludes with, but is not limited to, The Governor, a tank and a body count. Will the Walking Dead gang finally be forced to leave the prison? Who’s going to be left of said gang? Will the next encampment be somewhere a little more fun, like an abandoned Dave & Buster’s? So many questions, so long to wait (The Walking Dead returns February 2014).

Rick & Morty
Monday, Dec. 2 (Adult Swim)
Series Debut: Drunk-but-brilliant-but-somewhat-insane scientist Rick (voiced by show co-creator Justin Roiland) and his grandson Morty (also Roiland) travel the universe and run afoul of alien races on nightly adventures—which, naturally, has a negative effect on Morty’s schoolwork and general well-being. Despite the crazy worlds encountered, Rick & Morty has a more coherent comedy vision than the majority of Adult Swim offerings, thanks to co-creator Dan Harmon (Community) and a longer running time (30 minutes instead of the usual 10-15), but relax: it’s still as sick, twisted and wrong as anything on AS. Hell, they even sent me a flask in the promotional pack.

Kirstie
Wednesday, Dec. 4 (TV Land)
Series Debut: Post-Cheers, Kirstie Alley has made some terrible (Veronica’s Closet), funny (Fat Actress) and just plain sad (Kirstie Alley’s Big Life) television choices, but it was inevitable that she’d end up on TV Land, where careers go to eat dinner at 5:30. In Kirstie, she plays Madison Banks … not even named Kirstie? Whatever … a manic, hard-partying Broadway star who’s suddenly confronted with the son she gave up for adoption 26 years ago (Eric Petersen). With the help of her assistant (Cheers co-star Rhea Perlman) and chauffer (Seinfeld’s Michael Richards), she and the kid are gonna make sense of this nutty Manhattan life! Too bad TV Land mandates the canned laugh track of “classic” (read: tired) sitcom tradition—this probably could have been good. Well, tolerable. At least it’s better than Sean Saves the World, OK?