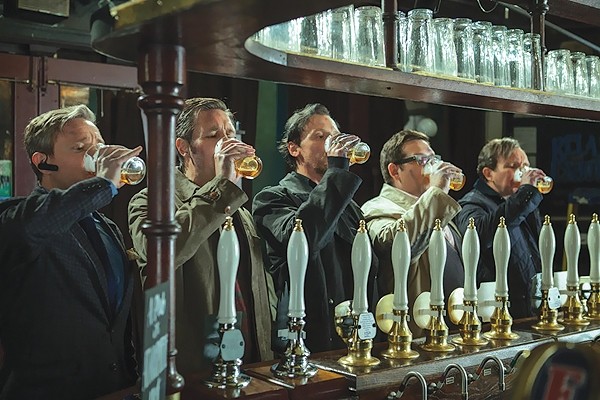 It’s hard not to sound condescending when I suggest that Edgar Wright doesn’t merely make “genre movies.” Despite the enduring frustrations of many professional film writers with a cinematic landscape that feels overwhelmed by superheroes, giant robots and crashing space ships, that’s still the kind of stuff that turned most of us into movie lovers. Genre movies never need to be “guilty pleasures”; when done right, they may be the purest kind of nonguilty pleasure the cinema can provide.

So maybe it’s more accurate to say that Edgar Wright does genre right—or, even more accurately, that he knows how to deliver genre pleasures plus a dose of something extra.

His previous features Shaun of the Dead, Hot Fuzz and Scott Pilgrim vs. The World all found people confronting physical threats—zombies, conspiracies, super-villains—that were somehow easier to battle than the angst and insecurities that they represented. Together with frequent co-writer and co-star Simon Pegg, Wright turns the love of disrespected genre fare into something almost profoundly humanist and affectionate. He loves cheesy flicks, but he loves his characters even more.

On the surface, The World’s End is still more genre-messing-about by Wright and company, focusing on an arrested adolescent named Gary King (Pegg) with a mission: to complete the one-night “Golden Mile” crawl of their hometown’s 12 pubs that he and his four best friends never finished when they were teenagers. It’s not easy convincing Oliver (Martin Freeman), Steven (Paddy Considine), Peter (Eddie Marsan) and Andy (Nick Frost) to give it a go more than 20 years later for old times’ sake, but that turns out to be one of the least daunting obstacles to completing the Golden Mile. Because, as it turns out, the sleepy town of Newton Haven may be the launching point for an alien invasion.

Actually, “invasion” may be slightly hyperbolic. It really takes the form of something more akin to a corporate takeover—the town’s residents replaced by hollowed-out replicas of themselves, the rough edges smoothed over in an attempt to make messy, self-destructive humanity more like the other worlds in the universal community. It seems every generation gets its own allegorical riff on Invasion of the Body Snatchers, and for this one, Wright and Pegg turn it into the slow, voluntary surrender of individual personality to something that can be accepted and absorbed on a massive scale. The greatest threat to humanity becomes an alien race essentially turning Earth into Walmart.

Yet Wright is also one of contemporary filmmaking’s true wizards of effervescent genre pleasures. It certainly helps to have the talents of Pegg and Frost to craft a rollicking comedy, their characters never quite taking on the same stock quality from one collaboration to the next. Here, Pegg’s Gary is a whirlwind of self-absorption, throwing his mates into harm’s way through his single-minded determination to relive his glory days, while Frost and the others slow-burn their way through indulging their fearless leader. And The World’s End is also one of the most deliriously well-made action films of the year, the brawling confrontations between Gary’s band and the robotic “empties” constructed with an anarchic choreography out of vintage silent comedies. When people talk about enjoying a movie because it’s purely “fun,” this is what they should be talking about.

It’s also more than just “fun,” even beyond the poking at monolithic monoculture. Surprisingly, The World’s End also turns into a wistful study of nostalgia, as other members of the gang besides Gary—including Steven, who has nursed an unrequited crush on Oliver’s sister (Rosamund Pike)—begin to attempt a re-creation of bygone times. But The World’s End makes it hilariously clear that the old neighborhood you go back to is never that old neighborhood again; sometimes, it’s not even the same world.

Wright and Pegg may over-stretch a bit trying to fold their celebration of flawed, idiosyncratic humanity into that skewering of romanticized youth, and the climax is fairly jarring in its ambition. But more summer adventures need to be this gloriously, intelligently, affectionately, hilariously bonkers. It’s kind of thrilling knowing that Wright has Ant-Man up next, because you can be fairly sure that even if it’s a comic-book movie on the surface, it’s also going to be more.