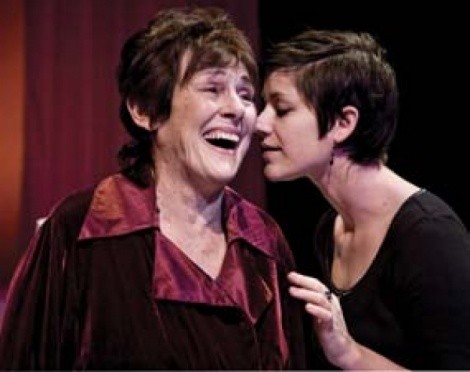 Without a script in my hand, I have no way of knowing how much of Salt Lake Acting Company’s production of The Clean House comes straight from playwright Sarah Ruhl’s stage directions, and how much comes from the mind of director Keven Myhre. And perhaps it shouldn’t matter—especially when it’s not a matter of whom to blame, but how to distribute praise.

Yet I’d still love to know if Myhre has taken some potential pitfalls from the page and wrestled them into something startlingly effective. Ruhl crafts effective characterizations and snappy dialogue for this story of Matilde (Camila Borrero), a Brazilian-born woman with a love of jokes reluctantly serving as housecleaner for married Connecticut doctors Lane (Joyce Cohen) and Charles (Mark Gollaher). She doesn’t really like her job, but fortunately for her, Lane’s sister Virginia (Anne Stewart Mark) has more time and interest in tidying up than she knows what to do with. But things are far from tidy when Charles announces that he has fallen in love with another woman, an older patient named Ana (Anne Cullimore Decker).

Any actor should love to bite into the words Ruhl provides here, but SLAC’s cast proves top-to-bottom terrific. Borrero—a University of Utah graduate returning from New York—gives Matilde’s homesickness and mourning for her beloved parents a light edge, so that her wit and her longing feel naturally intertwined. Cohen is typically wonderful as the just-so Lane, and Mark—who occasionally seems too stiff and brittle when playing the uptight WASP—latches on to a fully rounded interpretation of the dust-busting Virginia. Gollaher and Decker play mostly background roles until the second act but give their characters’ unique romance a poignant believability.

The trick for the production, then, is dodging a central metaphor that isn’t, shall we say, subtle. In the stark, organized home of her upper-class American employers, Matilde becomes the representation of the Latin lust for life, while her reverence for great jokes is an expression of accepting the surprise that they bring. Exuberance isn’t part of this world—Virginia in particular notes her reluctance to laugh out loud—nor is comfort with the messier and less predictable parts of life. A clean house, it’s not too hard to see, may sparkle, but it isn’t a home.

So why doesn’t The Clean House feel like a piece of “thesis theater,” albeit a wickedly funny one? In large part, it’s thanks to how effectively the production’s fourth-wall-breaking devices deflect any sense of self-importance. From the opening scene, a television monitor at stage left provides helpful—and occasionally silly—captions for the on-stage action. While Matilde and Ana bite into and discard apples at a side-set representing Ana’s seaside home, the fruit rolls into Lane’s geographically far-away living room—which Lane eyes with confusion from her couch. Lane’s home grows more cluttered with props and people, but so gradually that the shift never becomes obtrusive. Whether following a script or simply savvy, Myhre keeps the production’s mood unpretentious.

In fact, there are few missteps to be found in The Clean House. The contrast between Matilde’s black clothes and the stark white of Lane’s furnishings strikes a bit too precise a division between them, yet still works in the context of the production’s theatrical self-awareness. Several moments are perfectly staged, including a surgery that becomes a kind of religious ceremony, and a march through distant snows that’s instantly transporting. In the end, The Clean House becomes an emotional experience not because it grows sentimental or strident but because it recognizes the simple power of shared experience. In a commentary on a culture of personal isolation, The Clean House recognizes how much more intriguing life can be when people take a chance on coming together—like a theater audience watching the collaboration between fine actors, a gifted writer and a smart director.